Deadpool and all of the voices in his head definitely makes a memorable first impression. Deadpool and all its gameplay? Not so much. Justin fights through generic action sequences in hopes for video game redemption for the Merc with a Mouth. 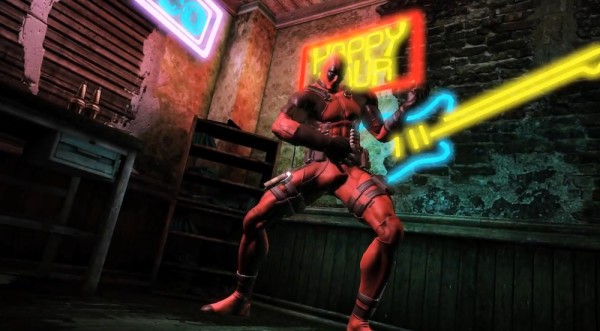 Just getting warmed up.

I’ve kept an eye on the game, Deadpool, only because I have a dev crush on High Moon Studios. It has made some pretty awesome Transformers games so I was anxious to see what it would do when given the chance to work with non-robot protagonists. Of course, I didn’t know anything about Deadpool as a comic book character so I figured this would be a great excuse for an introduction. After all, I like snarky heroes and violence, and it seemed pretty safe to bet that those would be included in this game. The question became would Deadpool be a breakthrough game for both the character and for High Moon, or would this fall on the pile of mediocre licensed games that are a staple of the Activision catalog?

Who am I talking to?

Deadpool goes all in on its main character, and Nolan North does a hell of a job mixing up his voice work to keep up with all of the voices in Deadpool’s head. It has been a while since I’ve played a game that entirely hinges on your affinity for the main character. There is absolutely no reason to play Deadpool if you do not enjoy Deadpool’s constant commentary and the ridiculous situations that arise from it. Actually, if you actively dislike the character, the game will be a downright miserable experience, so let’s assume from here on out you dig the punchlines that DP is throwing at you.

High Moon Studios knows how to put together an action game and make it feel like part of the source material’s world. Deadpool looks and feels like a comic book game. The graphics don’t go for hyperrealism but they are stylized enough that everything is in the right place. Deadpool’s character model is particularly well done, especially after he’s taken some damage. In a nice touch, the character model itself shows some gory damage rather than just the costume.

The problem with Deadpool is that all of this surface level entertainment is merely an above-average coating on top of an average, if not, boring gameplay experience. This is a tried and true third person brawler and shooter. In itself, that combo should be enough of a foundation to allow for some interesting moments. While switching between all of your weaponry works well enough, the focus on the breadth of options didn’t leave much room for any of the weapons to feel awesome. There’s also nothing technically wrong with running around, shooting, and chopping up your enemies as Deadpool, it’s just not very fun. 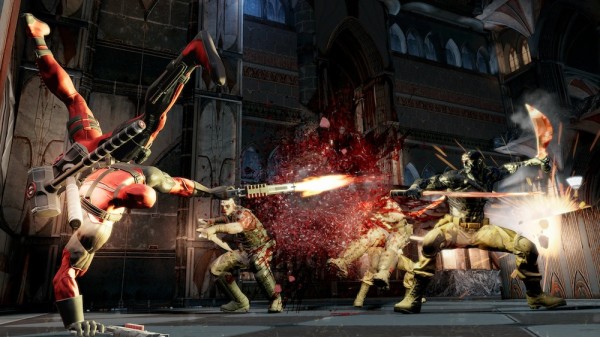 The highs of Deadpool come from the odd tangents and right hand turns that the story and cutscenes make. Unfortunately, the best of these moments don’t occur until you’ve busted around a hundred heads or so. I kept hoping that upgrading my weapons (4 melee, 4 guns plus some explosives/traps) would lead to some ludicrous combo or execution ability that provided endless entertainment. However, a couple of hours into the game I began to dread the combat in thanks to some particularly bullet-spongy enemies.

And who is this for?

While the action is certainly generic, it is also easy to play, so easy in fact that I kind of question who the audience for the game is. The humor and violence rank it up as an M game, but the gameplay almost makes it feel like it was intended for beginner gamers. Although, Deadpool is also full of random spikes in difficulty. I had to replay some battles (and the attached cutscenes and Deadpool banter) too many times until the point of frustration. I was left at a loss as to who was supposed to actually enjoy fighting as Deadpool.

The icing on my irritated cake was a few scattered platforming sections, that this game engine just wasn’t cut out to handle. The awkward deaths coupled with some questionable checkpointing had me questioning any additional time I put into the game.

Just as I was ready to put my controller down, some wacky cutscene or gameplay sequence would pop up. Whether I’m arguing with Cable or suddenly playing an 8-bit version of Deadpool meets The Legend of Zelda, I couldn’t help but laugh enough to push through to the next silly moment. I also highly enjoyed how much Deadpool references that he is both making and playing in his own game developed by High Moon Studios. Like any comedic device, it may get old for some people, but I definitely had fun watching Deadpool.

Want to finish this for me?

Deadpool strikes me as a game that is a perfect fit to play along side some comic book and gaming friends. Having someone there to tag in to play the game would help balance out the fact that Deadpool’s pacing ultimately the game feel like a chore. No amount of unpredictable chicanery can save it.

Had I been able to sprint through the action, I think Deadpool’s humor and randomness could have carried the game into being a mindless and entertaining action game. All of Deadpool’s personality and creativity is wasted on a game that’s foundation shows zero aspirations to be anything more than just another comic book video game.