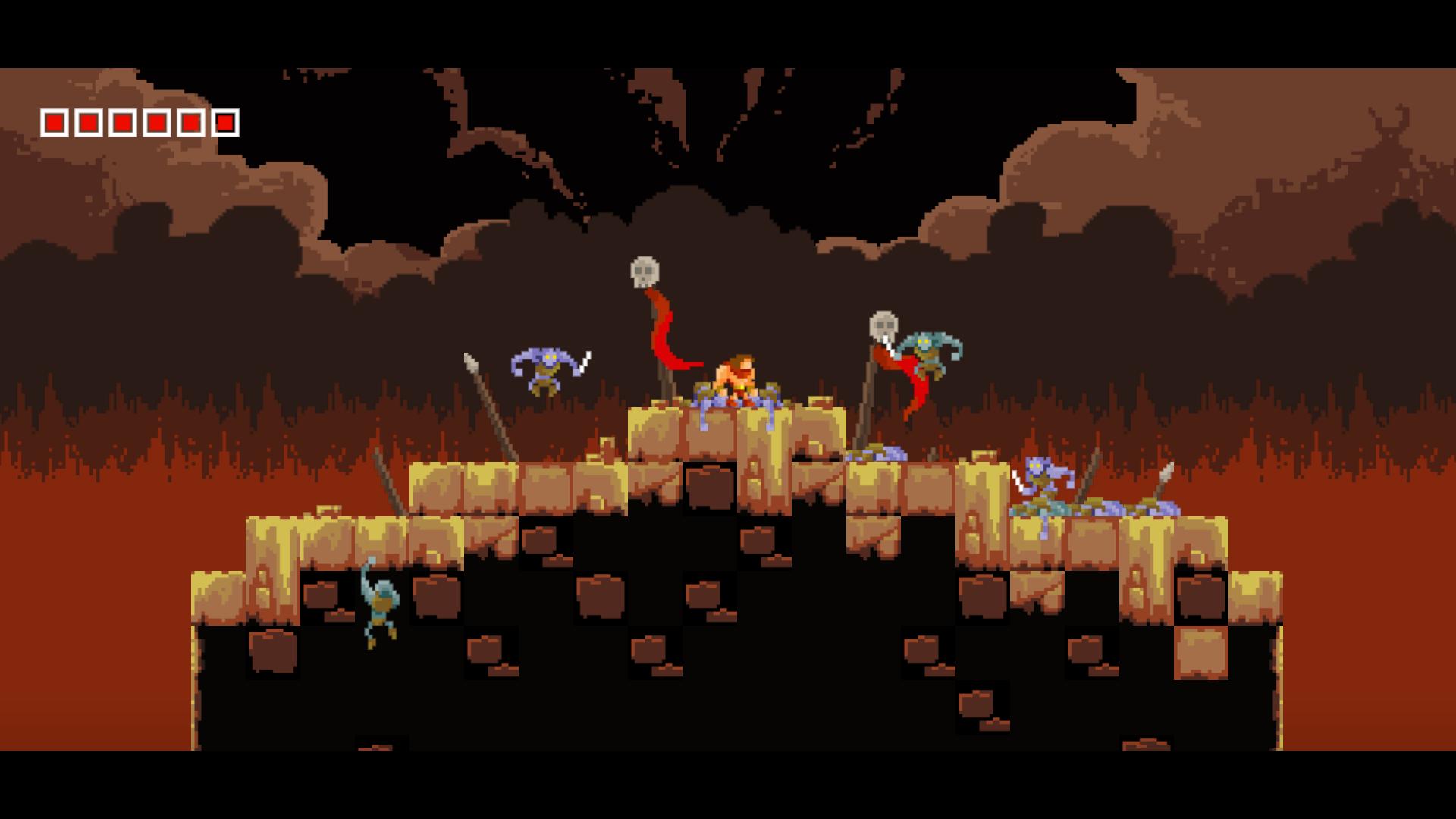 It seems like you can’t take a walk through the indie game scene without stepping into a big pile of retro platformer and for the most part, “piles” are what they tend to turn to be. I’ve grown pretty cynical about retro platformers in the last year because most of them are infuriatingly hard just for the sake of being difficult and give players little reason to continue through the game outside of bragging rights. None of that, however applies to Tiny Barbarian DX as Starquail hits one out of the park with this little gem.

Tiny Barbarian DX more or less equates to a re-imagining of the Conan: The Barbarian stories by Robert Howard. While the brutality of those tales still exists within Tiny B’s universe, it is softened and injected with a bit of humor and a much brighter paint job. The first episode of what will be a 4 part offering (purchasing the current game unlocks all the episodes as they’re released) deals with a certain Serpent Lord and will have our hero navigating his way through rocky cliffs, perilous dungeons and the Serpent Lord’s base of operations.

The main difference between Tiny Barbarian and other platformers is that while it is both difficult and has that retro aesthetic everyone seems to drools over, there’s a thoughtfulness applied to both that very few developers really get. It’s easy to slap pixel art into a product and then validate crappy gameplay because it’s supposed to be “retro”; it’s something else altogether to explore the appeal of retro gaming and find the pieces that really make people long for the good ol’ days. This equates to plenty of nostalgia inducing tidbits coupled with some contemporary touches that will surprise those thinking Tiny Barbarian is just another retro platformer. 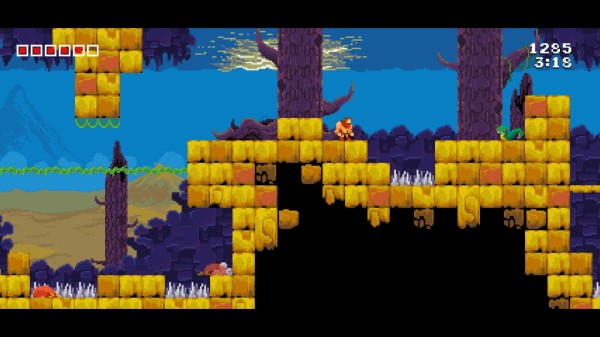 Spikes, why does it always have to be spikes.

The gameplay is quite similar to other titles in the genre as you’re tasked with jumping, climbing and fighting your way through the game’s many obstacles and enemies. Tiny B himself, however, has quite a move set to pull from so you can expect combat to be quite a bit more dynamic than you’re used to. He can string together simple three hit combos, knock enemies into one another, and even drop elbows on any bad guys that happen to be underneath him when he jumps. This makes fighting actually fun and not just a means to an end as it is in most games.

Visually, the game is bright and detailed despite the overall retro feel. The animations of everything, from your character and your enemies to subtle background details all come together to make the stages feel alive. There’s never a time when the visuals are boring, which is something I’ve found with similar games.

As mentioned above, the presentation of the game is very impressive as StarQuail has injected some cinematic flare into the mix in order to keep the experience from feeling redundant. Before the game even begins, we witness the protagonist of the story standing atop a mountain as enemies climb up after him. You’re able to control your character (which may not be obvious at first) and can fight off the enemies though you’ll eventually be defeated, which leads to the actual title screen. And boy what a title screen it is! Seriously, if you aren’t pumped to play this game after the first 2 minutes, you either don’t have a pulse or hate excitement (you may also not be a fan of platformers as well, which is fine). 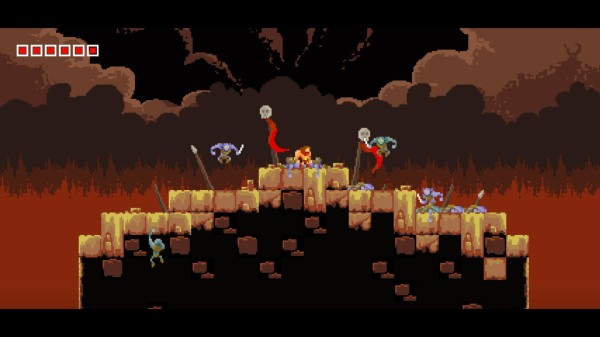 This is only the beginning, I have my work cut out for me.

From there, the game opens up into a fluid experience that’s challenging though not obnoxiously so. There is a steady difficulty curve and mistakes tend to come from the player and not because the game is broken in any way. The game is split into sections that host a variety of different obstacles and enemies. There are no extra lives or continues so after your six life pellets disappear, you’re dead. Fortunately, the checkpoint system is quite kind and “saves” your progress once you complete a section. Because these sections tend to be bite-sized portions that contribute to the larger level, the frustration of replaying a tough section is virtually eliminated. That is a good thing because Tiny Barbarian can be tough.

I can’t say that I necessarily like difficult games, but Tiny Barbarian goes out of its way to keep me in the game. While the gameplay tends to stick to the same formula throughout, there are variations in place that prevent Tiny B from getting stale. For example, the first few sections were mostly about platforming, but I eventually came to a fortress and happened upon a lion-like creature that I could ride. From there, I dashed through the stage and toppled bad guys left and right, the intensity of previous stages replaced with the power and speed of my new buddy. These sorts of “breaks” coupled with smart and interesting level design keep you feeling fresh even after you die a million or so odd times. There always seems to be something new or exciting in the next stage and that fact keeps you plowing straight ahead no matter what stands in your way.

Music to My Ears

The soundtrack by Jeff Ball is another factor that keeps you focused on the completion of the game. From the opening track to the varied background music, Tiny Barbarian has one of the finest soundtracks I’ve heard for a while. It’s really motivating to arrive to a new challenge only to have the an army of instruments reassuring you that it’s your time to shine. I stayed pumped up throughout my time with the game, so pumped that I startled my cat with my enthusiasm and had to coax her from behind a couch. If that’s not evidence of a good soundtrack, I don’t know what is.

The game is a great representative of how retro platformers should work, though I did have a few little gripes and one big one. In terms of my biggest complaint, I HATE THE FLYING ENEMIES! I realize that they are part of the challenge and StarQuail handles them way better than most developers, but that didn’t stop me from groaning every time I saw a freaking eagle or bat coming my way. Flying enemies in platformers are the bane of my existence and if I had it my way, they’d be eliminated for good. It didn’t help matters that these flying enemies were actually kind of smart (like most of the enemies in the game) and could change their usual pattern to send me plummeting to my doom.

I also struggled with controller support for the game (which is something they are currently working on). I played through it with a keyboard, which is a testament to the tightness of the controls but definitely not the way I’d like to play (seriously, try your damndest to play with a controller). It’s suggested that you download a secondary program to handle this, but I ended up having to dig through a couple to prevent a bevy of third party programs from being loaded onto my PC. Again, definitely something that’s being worked on but for those playing the current build, it’s something to be aware of.

There are also a couple times where the game’s refusal to hold your had actually works against you. Because there’s a lack of text directive (which is fine by me but worth noting) you are going to want to make sure you read the instruction pamphlet (it’s in the install directory) to make sure you have a handle on all of the controls. Also, there are a couple times in the game where it’s not very obvious what you’re supposed to do next. The beginning intro actually made me mad at first because I thought that StarQuail had decided to ignore balancing issues entirely until I realized it was just a cinematic. This also happens on the first stage as well when you find your hero tied to a piece of wood. Impatient players may get frustrated by such instances, but patience and the mashing of keys tends to get you through most of them.

If the first episode is any indicator, Tiny Barbarian DX is going to be at the top of the retro platformer food chain. Attention to details, dynamic game play and perfect pace make it the perfect game for tickling your nostalgia sector.