My gaming brain was definitely focused on my childhood in the past week, mainly because Nintendo isn’t exactly instilling confidence in fans like me heading into E3 (nice try in shutting me up by distracting me with Super Metroid by the way). I’m not sure if it was out of spite that I randomly went back and downloaded all of the Sega Genesis Classics packs, but two unexpected benefits came out of that choice. 1) I was forced to realize just how little Sega Genesis I actually played while growing up. 2) I’m an idiot for never showing Ecco the Dolphin to my girlfriend’s 4 year-old daughter. 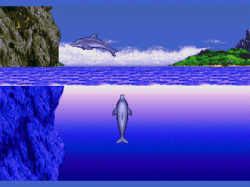 Swimming and jumping without a care in the, oh, no.

Ecco is incredibly immersive even today. I think part of it is the amazing soundtrack (why didn’t someone tell me about this sooner?), but the other is just how the game encourages you to explore. My young counterpart was completely content to just swim around without any assistance, which is a huge step forward for her on controller based games as she’s still learning how to use a d-pad/analog stick at the same time as the face buttons. Ecco is a great teacher. Of course, once she had seen all of the opening area I had to dig into the ancient files to my brain and figure out how to move to the next area. After that didn’t work, we had to go to the internet. But still we made it to the next area, and she couldn’t have been happier once we started talking to more dolphins and whales.

What retro game remains as immersive for you today as it was when it was first released?

My other major exploration took place within the menus of Warframe. I was determined to get back into this game as I hadn’t played it since its official release, and I wanted to get deeper into its upgrade and modding systems. The action was as good as ever and definitely excels with friends, and while it took some tinkering, we eventually figured out how to trick out our abilities and weapons. I was rewarded with the discovery that I almost had enough Platinum (AKA Warframe Space Bucks that you can buy with real money) to buy a new weapon. There was only one true choice of weapon though, I had to get the bow. All you need to know is that this bow is a game changer.

Sure, I may be easily entertained by rag doll physics and the ability to pin enemies to the wall, but that only further justified my 2nd ever free-to-play purchase. In truth, the melee combat, the agility of your character, and the unique character designs is what makes Warframe standout. It’s just a nice bonus that creatively killing your enemies remains consistently fun.

What F2P purchase became a must-have for you?

Just take a moment and relax.