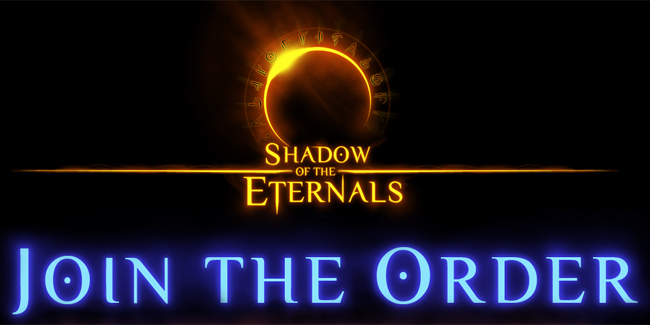 Today was an absolutely lovely day in good ole’ Berlin. The sun was shining, the temperature was just right and so I decided to accompany my wife on a little trot through town. This was a huge freaking mistake as during my absence the “spiritual successor” of Eternal Darkness,  Shadow of the Eternals was revealed over on IGN.  Further details will be released on IGN on Monday, but what we do know is that Precursor Games will be heading the project and crowd funding campaign will be launched. It is also reported that Denis Dyack, head of Silicon Knights will be involved with the project.

The teaser trailer was brief but robust, showcasing a medieval setting that will most likely act as one of the many points in history the game will feature (assuming it sticks to the traditional blueprint which Wired reported may in fact be the case). Visually the game looks slick and definitely hearkens back to the style used by the original game. The characters also look completely baffled as to what’s going on in their little slice of Hell, which is more or less the point of the game. It’s tough to go crazy when you can cope with the zaniness exploding all around you.

This has already turned out to be a really good year for horror and this announcement just solidifies its place in the hearts of developers of all shapes and sizes. While I’m psyched to see what The Evil Within is all about, Eternal Darkness and everything related to it hold a special place in my heart that’s only rivaled by the Resident Evil and Fallout series.

4 Comments → Shadow of the Eternals Revealed as Successor to Eternal Darkness, Crowdfunding Begins May 6