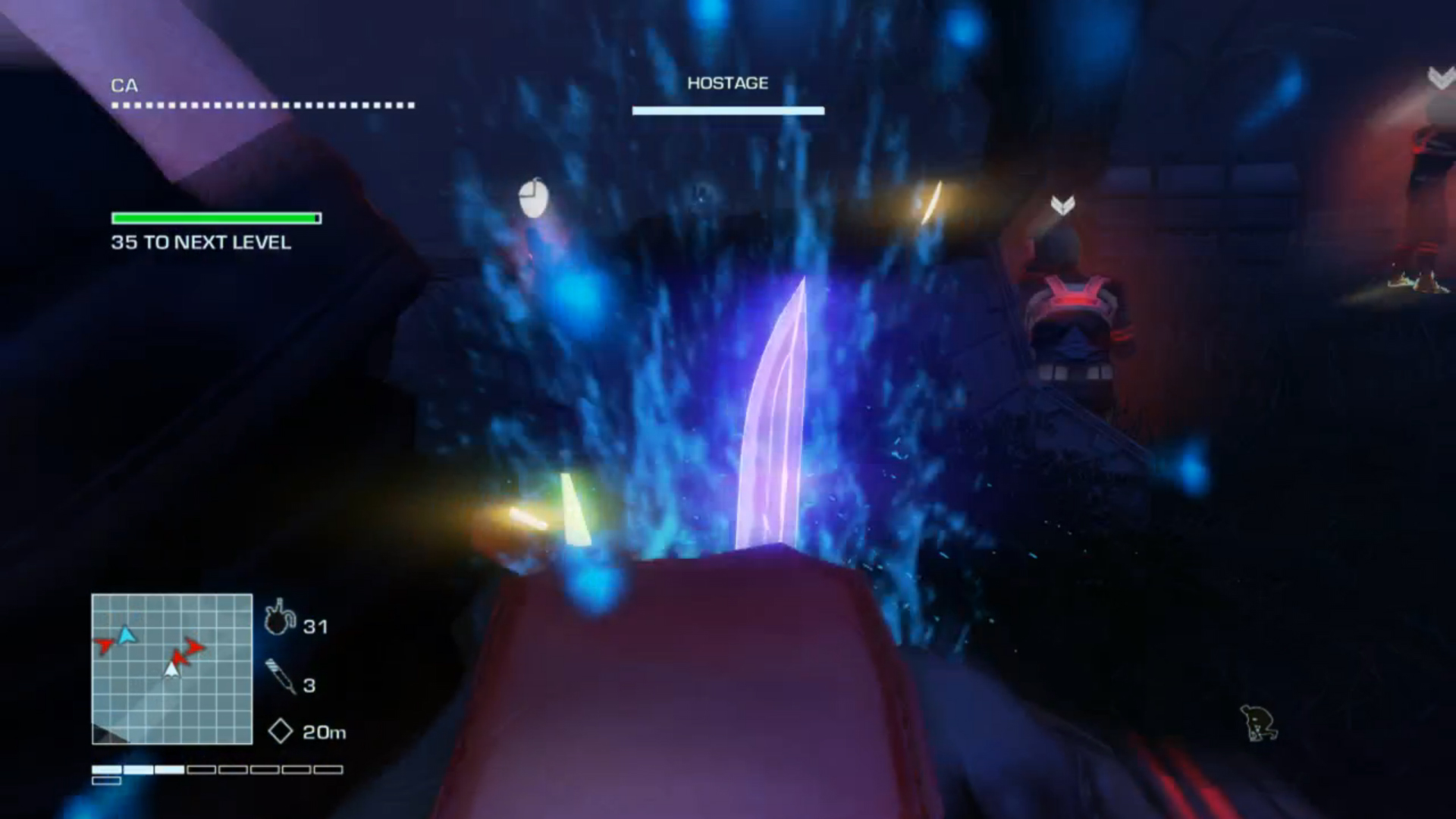 To say I was excited when I first saw the trailer for Far Cry 3: Blood Dragon would be an understatement; blowing a load would be far more accurate. Yet this blown load wasn’t the normal load I’ve been known to blow in regards to the medium of electronic entertainment. This was a load that had been building inside of me since I was a child, screaming to be released but unable to do so despite the best efforts of films like The Expendables and the single player campaigns of Call of Duty games. This was a load that the fine folks at Ubisoft Montreal Studios were born, no destined, to coax out of me. This is the point where I’m supposed to write something along the lines of “could Blood Dragon bear the load (boom) of my expectations?”, but I’m too amped up for drama. To be blunt, Blood Dragon is going to make your silly little genitals ejaculate while you walk away without looking at the resulting explosion of nostalgia that will occur once it’s a safe distance away.

Far Cry 3: Blood Dragon is a stand alone expansion starring protagonist Rex “Power” Colt as he attempts to thwart the plans of a fellow cyber commando gone rogue. It’s set in the alternate reality version of 2007 (as theorized by folks from the 1980’s) after the world has endured piggy backed apocalypses, the result of WMDs used during a conflict called Vietnam War 2. It’s outrageous, it’s in your face and it isn’t afraid to poke fun at itself, its source material and the medium of video games in general. I was entertained from start to finish (aside from a few parts that I’ll speak to later) and really dug the low-fi cut scenes that filled in the story gaps along the way. I don’t want to spoil anything, but Blood Dragon may have the greatest beginning and ending sequences of all time. 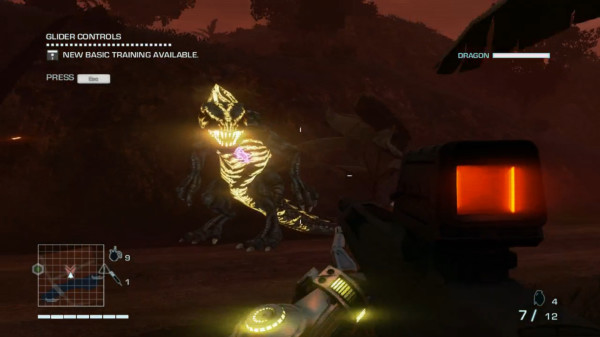 Blood Dragons make for interesting, yet formidable foes but can be quite helpful as well, kind of like cats.

Blood Dragon amounts to a refined, reskinned version of Far Cry 3 where the bright, contemporary jungle setting is replaced by a futuristic, neon soaked playground. The pirates have been replaced by cyborgs and animal life replaced by, well cyborg animals. The biggest additions are the high tech outposts (with a substantial increase in indoor levels) and the titular blood dragons, giant laser spewing reptiles with a taste for cybernetic booty. I didn’t love the indoor levels being that I was used to the freedom that Far Cry 3 gave me, though fortunately they make up a low percentage of the game’s content. The blood dragons, on the other hand were great and worked perfectly as both challenging enemies and a possible force multiplier in combat. Because they love to eat cyborgs, they’ll chase after the cybernetic hearts that you pull from enemies (they’re thrown just like grenades). Clearing a compound using stealth used to make me feel super accomplished, though using a blood dragon to do it for you is just as satisfying.

Slim and Tight, a Perfect Bite

The modifications to the visuals are interesting enough to keep you from having that “been there, done that feeling” though I did have trouble getting used to the neon color scheme much in the same way I have issues navigating trendy dance clubs for the first few minutes I’m there. Eventually, you’ll get your bearings and feel right at home as long as you don’t have a seizure in the process as the lasers and explosions are spread thick.

Your weapons go from beefy cyber tools to hysterically over effective pretty quick.

While Blood Dragon plays very much like Far Cry 3, there are a few changes worth mentioning. Crafting is out, replaced by the weapon upgrade system which rewards you with modifications (purchasable at the vending machines strewn about the game) for completing side missions. In all honesty, I’d gotten my fill of hunting animals in Far Cry 3, so new players won’t have as much incentive to track down the many beasts that roam the environment which was an enjoyable diversion. Additionally the skill system is linear, which means gaining experience opens up a set path of character upgrades as opposed to the player being able to pick and choose from a number of different skill trees. Had this been a longer game, it’d have taken issue with that but it didn’t really effect me during my time. What remains is the very solid combat formula that FC3 introduced us to. The fluidity of combat is still there and you’re able to tackle objectives from a variety of different angles, all of  them just as satisfying as before.

Rex himself is a vastly different character than Brody in a number of different ways. Being an homage of sorts to heros of 1980’s action movies, he constantly spews one liners and heroic statements as opposed to the insecure ramblings of a spoiled rich kid coming into his own. If Far Cry 3 was supposed to be a tongue in cheek treatment of action games and the “great white hope” mythos, then Blood Dragon has taken it to an entirely new level, outdoing the latter with an unapologetic smorgasbord of cheesiness and genre references that pulled more than a few external laughs from me. Rex is a toned down and more likable version of Duke Nukem.

Because he’s a Mark IV Cyber Commando, Rex also handles a bit differently than Brody as well. He moves faster, jumps higher and can take more damage than his fleshy counterpart. This caught me off guard at first, though, like the visuals, I adjusted quickly. While Brody was able to perform some pretty incredible feats, Rex does it all with a level of ease that is incredibly satisfying. In one sequence, I jumped from a height of about 30 feet to come crashing down on two enemies to perform the slick take down that I struggled to accomplish in FC3 (it feels like the process was simplified as merely jumping on an enemy from above performs the move without additional input from the player). By the end of my playthough, I wondered what it would have been like if Rex was the protagonist of Far Cry 3, though I’m sure the results would be a much larger death toll and a considerably shorter game. 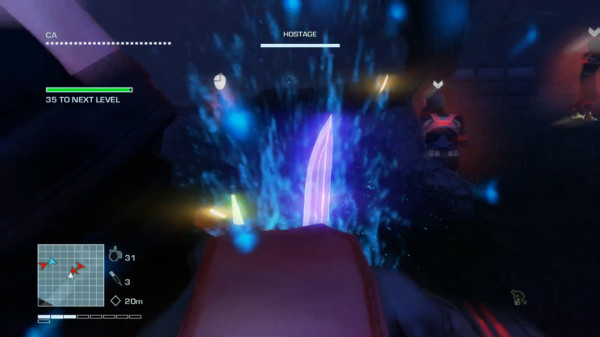 These cyborgs won’t know what hit them.

Speaking of length, Blood Dragon is supposed to take you about 8 hours to finish completely, though I finished up just shy of 6 (I skipped most of the side missions but took over all of the outposts). This is the perfect length for a standalone expansion like this as I never felt the game overstayed its welcome. We’ve talked about it on the podcast a few times, but I think that along with setting a precedent for how DLC should be created, Blood Dragon also hints at the potential of offering the single player campaigns of multiplayer focused as discounted, standalone components for those that aren’t really into competitive shooters.

Blood Dragon is by no means perfect, however, and the source of its issues lies within the humor it exudes throughout. While the gameplay is perfect for mass appeal, the story and content may not be. The game assumes that you’ll understand the references it makes, which is awesome for a guy like me who happens to be in his late twenties, but may go over the head of a younger audience (though should you be the latter, I recommend polishing up on your eighties knowledge as you’ll be a better person for it). This isn’t necessarily a criticism as the developers picked their demographic and stuck to it, though I don’t want to give off the impression that the story is SO entertaining that everyone who plays video games will be smiling from ear to ear in the same way that I did. Additionally, Blood Dragon introduces a few sequences (which I think were made as jokes) such as the tutorial and a wave based arena section that while funny at first, did frustrate me pretty quickly. Again, the game is unapologetic about what it’s trying to do, though it does stumble across that thin line between an inside joke and alienating players.

All that being said, the greatest aspect of FC3: Blood Dragon is how the development team went all in. While I’m cognizant of the importance of mass appeal, it was nice to feel like a game was made with specifications pulled straight from my heart. I realize it was trying to be funny, but I was moved on more than one occasion as I got the black and white, good guy versus bad guy story that I love. No skeletons in my main character’s closet, no grey area to be dissected on forums, just the unadulterated serving of justice from start to finish. Don’t get me wrong, I like a story with twists and turns but sometimes game developers and film makers alike try so hard to go against the grain that what comes out is nothing but a condescending statement about how everything we know about our most beloved heroes is fake or blown out of proportions. It’s tough not to get behind Rex as despite being made of cybernetic components, his human side is very much intact.

While Far Cry 3: Blood Dragon has been a blessing to my game library in many ways, it’s also a bit of a curse as I know it’ll be a while until I get a similar experience; I just don’t imagine another game could appease me in the way in which it did.

Value score:  5/5 – At 15 dollars, its a genius way to give Far Cry 3 veterans a little extra helping of a game they undoubtedly enjoyed while acting as thorough sampling of what newbies can expect from the base game.