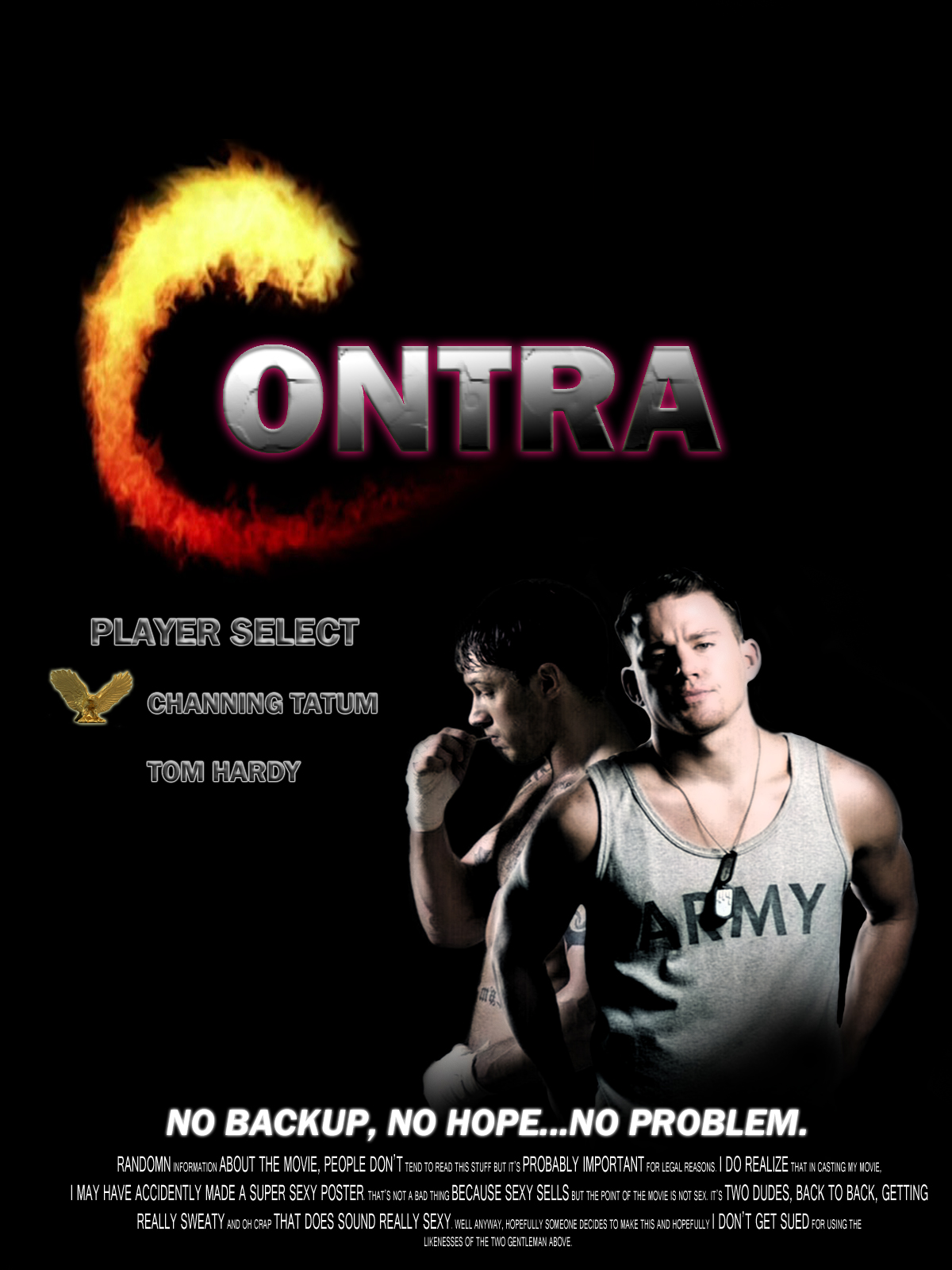 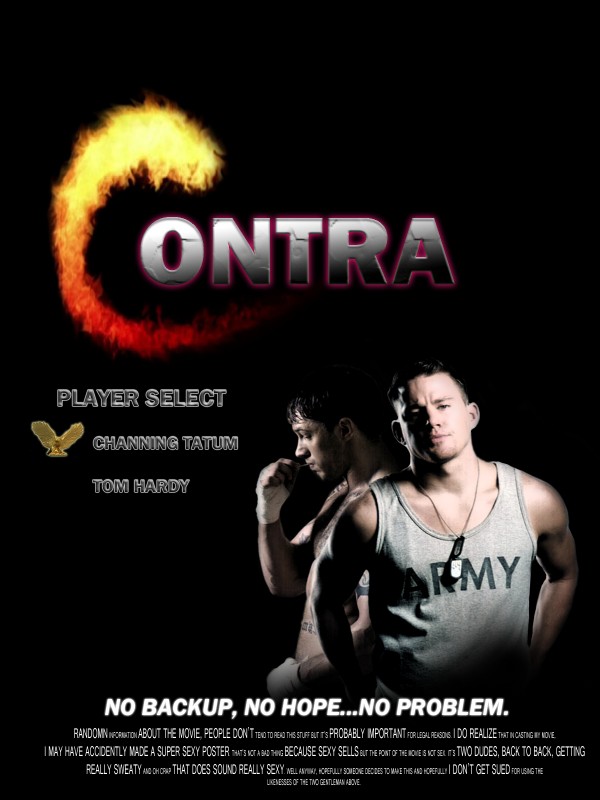 Let it be known that I’m well aware of the fact that my attempt to make a Contra movie poster that hearkened back to the original title screen turned into a pretty sexy picture.

After witnessing the generally positive feedback that the Far Cry 3: Blood Dragon trailer received, I came to the conclusion that the gap between my gaming generation and the one below me may not be as wide as I originally thought. The younger guys and gals seem to understand and approve of the style that dominated games and movies of the eighties and early nineties, which means that there’s a lot of wiggle room in regards to the source material that can be used in the game to movie transitional process. This means that the door is finally open wide enough for Contra to make its way to the silver screen.

The difficulty with a Contra movie from a design perspective is whether or not you fully commit to making a believable action movie or  go with a cheesy nod to the generation it was born in (ala the Blood Dragon trailer). I think there’s an inherent flexibility to plot of Contra that makes it easy to go in either direction, but I’d personally like to see what the special effects gurus of Hollywood could do with the characters and settings of Contra. That being said, the plot and dialogue should be self-aware enough to give the audience a good laugh (think the 21 Jump Street movie meets The Expendables). The fact of the matter is, the game was about two guys running straight forward while shooting aliens and robots; it’s all but impossible to try to turn such a story into an intense thrill ride that rivals contemporary action flicks. 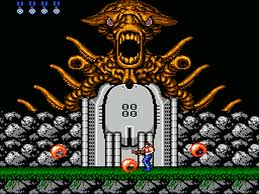 Can’t wait to see what the CGI treatment on this thing would look like.

My choice of leading characters was heavily influenced by the aforementioned tone, as I think Channing Tatum as Bill Rizer and Tom Hardy as Lance Bean would be able to pull off the gruff soldier persona and over the top one liners quite easily. Obviously Hardy would play the straight guy, more brooding than funny while Tatum could bring back a toned down version of his Greg Jenko character from 21 Jump Street. The combination of Hardy’s ultra badass persona and Tatum’s meathead jock fits perfectly with how I imagine Bill and Lance would be in real life. Two strong but silent types would be pretty dang boring as the bulk of the screenplay would be descriptions of grunts and courageous looks.

I’m sure I’ll get crap for using Channing Tatum when there are plenty of other choices, but personally I’m a fan of the guy. That may be a bit biased since 21 Jump Street is both my favorite movie and the only film I’ve ever seen him in, but for what I have going in my head he’s the perfect fit. While the obvious choices would be Schwarzenegger and Stallone, they’re getting up there in the years and we need to begin assembling a new generation of action super stars.

I imagine Lance and Bill in their early days as soldiers, before they were the iconic duo we know of today. Both are elite commandos, though seen as loose cannons by their superiors. Bill is a bit cocky and showboats a bit on the battlefield while Lance tends to put himself and others at risk in order to get the job done. After both their teams are wiped out on a mission, they are blamed and relieved of their duties only to be approached by a shadowy special forces group led by Captain Ajax Willis and recruited into their ranks. They’re assigned to the same unit and struggle to see eye to eye in the beginning, though an attack on their base by a terrorist group known as Red Falcon forces them to come together and begin the shift into the formidable combat team they were meant to be.

The following is an excerpt from a script I’ve been working on. The scene begins just after the terrorist attack as Bill and Lance search desperately for survivors:

The air is filled with smoke and the screams of wounded soldiers as Bill and Lance run through the ruble of what used to be their home base. Dramatic music plays in the background as they dig around looking for survivors.  There’s movement in the foreground as a bloody hand rises up out of the ruble.

They run over and quickly pull pieces of concrete and sheet metal off the body of the gravely wounded Captain Ajax Willis.

Captain Ajax: (coughs) Bout time you boys found me, been wasting time sitting under all this junk.

Bill and Lance try to pick him up, but the camera pans down to show that the lower half of his body is completely missing and he’s slowly dying.

Bill: MEDIC! SOMEONE GET ME A GOD DAMN MEDIC OVER HERE

Lance: (stares off with an intense look on his face as vengeance begins to burn throughout his body).

Captain Ajax: No…. (he looks at Bill with an “I know I’m about to die look) The way I look at it, I’ve lived a whole lot longer than the good lord intended. It’s too late for me, but… it’s not too late for you two to bring down those Red Falcon scum…(coughs). I know you two don’t get along, but that’s because you’re both too damn stubborn to understand that a team is far more effective than any 1 man. It’ time you two realize that together, you’ve got what it takes to save this god forsaken planet. It’s time for you too trust at least one person (coughs) to have your back…

Captain Ajax closes his eyes and dies. Bill and Lance clench their fists and slowly rise to their feet, fires raging behind them. 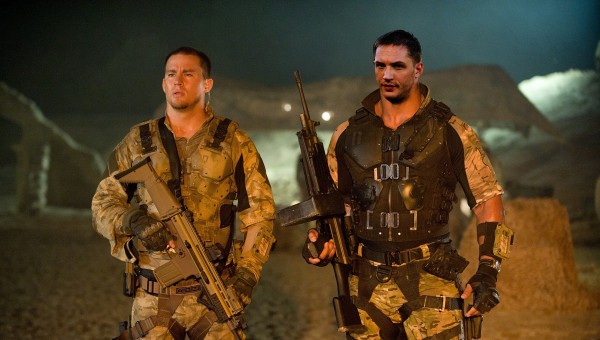 They messed with the wrong squad of secret commandos…

Lance: (Breaking his brooding s silence) You heard the man…(reaches down to pick up a rifle and throws it to Bill) Let’s take this teamwork thing for a test drive.

Aerosmith’s “Back in The Saddle” begins playing as the scene fades to  a montage of Bill and Lance assembling the supplies they need while smoking cigars and drinking whiskey. Scene ends with them piloting a helicopter across the ocean as the Red Falcon headquarters looms in the distance.

Boom! If people aren’t standing in their seats cheering at that point, I no longer have faith in humanity. From there Bill and Lance go on a chaos filled explosion fest that’s budget will make Waterworld look like a Casey Affleck joint. I figured that while the movie will be based mostly on the original Contra, we could sample from Contra 3: Alien Wars a bit as I really want to bring that giant turtle monster into play. I can imagine the tension as Bill and Lance approach the enemy base, only to hear distant footsteps. As the sounds get closer, they raise their rifles and the freaking turtle thing comes busting threw the jungle, roaring and shooting plasma balls at them.

This brings me to the problem of what to do about weapons. Do we give the protagonists unlimited ammunition? Should they still get power ups from the sky (if so, how do we explain that)? And finally, how many 1ups are too many when trying to portray Contra in a more dramatic light? I’m all for unlimted ammunition and with the drone technology we have nowadays, floating weapon upgrades aren’t too unrealistic. Unfortunately, the characters can only have one life as if there were options for more, the scene where Captain Ajax dies wouldn’t make much sense because Bill or Lance could give him one of their lives.

I tend to dream big and think unrealistically, so this project may never see the light of day. Even if it does not, I can at least watch the following YouTube video and imagine what life would be in a world where the Contra movie actually exists: