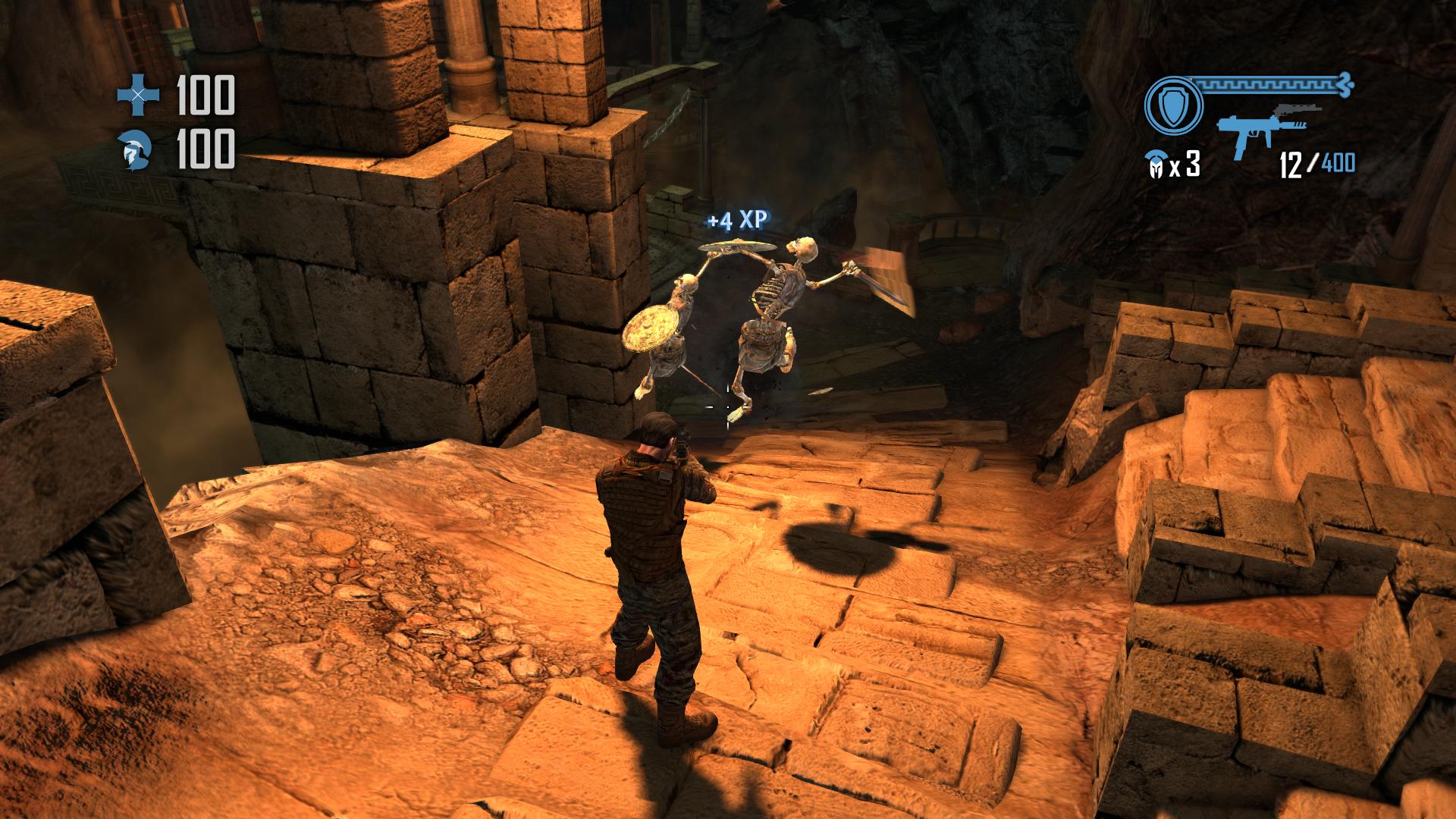 I have to admit that I probably wouldn’t have picked up God Mode if a.) Justin Lacey didn’t suggest it and b.) it was more than $9.99. That being said, I’m glad that those two conditions contributed to my latest purchase as God Mode is a pretty good example on how to do a budget game right. Whether that’s a compliment or a dig will depend entirely on what sort of gamer you happen to be.

God Mode has a subtle background story involving the afterlife, Greek Gods and other tidbits that are supposed to explain why a group of undead warriors are forced to fight never-ending waves of  monsters. Being that I don’t really need a reason to play games that involve the aforementioned subject matter, I focused on the meat and potatoes of the game, which is the shooting of creepy things.  If you’ve played games like Painkiller, Serious Sam or The Haunted: Hell’s Reach then you’ll feel right at home with the style of gameplay God Mode offers. You pick a level, you spawn in said level, and then you spend the rest of your time shooting anything that’s not a power up or one of your teammates. If games still came with instruction manuals, God Mode’s could be quickly scribbled on a napkin. 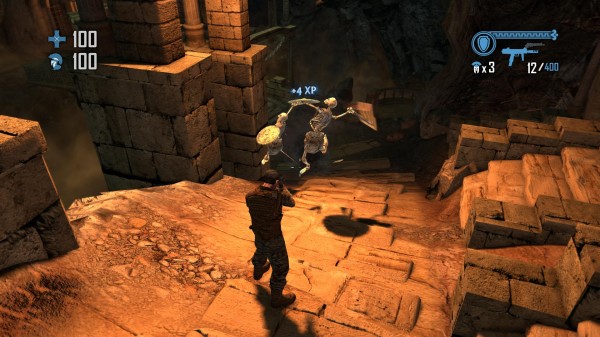 The levels and enemies are all based in Greek mythology, with minotaurs and skeleton soldiers chasing you around crumbling colosseums and ancient temples. Your character, on the other hand is from an era further along in history, meaning your foes have to get over the initial shock of being fired upon with guns at as opposed to stabbed or shot with arrows. Everything looks nice and the animations are smooth enough, though the design of the overall package isn’t all that unique. I do have to say that I was surprised to see random attempts at epicness going on in the background of each level, such as a giant monster peaking in on my battle or an even bigger minotaur churning lava with what looked to be a ladle of some sort. Cool? Yes. Breathtaking? Not so much but I’m always a big fan of a little extra effort.

God Mode does add some unique additions to the genre in the form of Oaths and Tests of Faith. Oaths are modifiers that can be chosen beforehand that add slight increases to both the challenge and the amount of gold and experience (more of that in a bit) that you recieve throughout each level. There are 7 to choose from and you can assign as few or as many as you’d like. This gives the game a wide range of difficulties outside of the bronze, silver and gold (easy, medium and hard respectively) you’re able to select from the match creation queue. I made the mistake of selecting 5 of the 7 Oaths for a level and it didn’t exactly work out so well for me but I’m also not the most skilled gamer in the world (as evidenced by the montage of death that is my playthrough above) 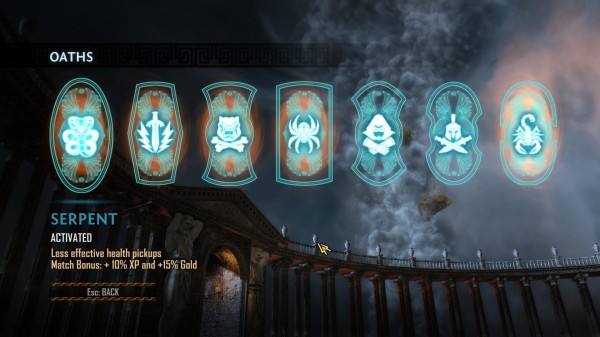 Let’s see if we can’t make things a bit stickier in here.

Tests of Faith, on the other hand are modifiers that are randomly assigned to each of the level’s sections and do things that can either help or hurt your character. For instance, one of the first Tests of Faith I encountered was a modifier that gave me unlimited ammunition, the next made all the enemies miniatures and after that the my weapon randomly changed every few seconds. These were fun ways to help ease the monotony that comes with this style of game as straight forward run and gun action can only take a title so far.

There is a progression system in place in God Mode, which allows you to buy/upgrade weapons and abilities as well as purchase cosmetic items for your  avatar. At first I appreciated this aspect of the game because it does give you something to work towards as grinding through the levels without a whole lot of reward may get stale after a while. However, I began to wonder whether the upgrade system was there to enhance the game or hide the fact that it’s a bit of a one trick pony.  You should understand going in that the  progression system is not going to make you suddenly like wave based shooters if you never did before. However, if you were one of those gamers that avoided wave based shooter because most of them lacked a progression system, you’ll be quite pleased with what God Mode has to offer.

I did enjoy my time with God Mode (especially after teaming up with two guys that happened to be watching my stream) but I can’t say it’s going to be featured on my playlist. Even though it does what it does well, there’s not a whole lot to the God Mode outside of the running and gunning. I don’t think that’s a harsh criticism as the advertisement clearly states the following:

Do you like running? How about gunning? What if special abilities are thrown into the mix? Upgradable weapons? Let’s say there’re dozens of on-screen enemies to unleash this firepower on, and as your reward for dispatching them you get experience and gold to collect that can be used for character customization and new equipment–all the while playing alongside friends in 4-player cooperative play! If you like the sound of all this, then you’ll love God Mode.

Again, if you like those things, you’ll like this game. If you want a bit more substance, well there are game available for a more substantial price.

God Mode’s biggest advantage is going to be its low price, simple gameplay and co-op as those features make the game very accessible to a wide range of gamers.  If you’re on a modest gaming budget, buy the game and talk your buddies into it to maximize its effects. If you happen to be better off, buy the 4-pack and then force them to play with you. 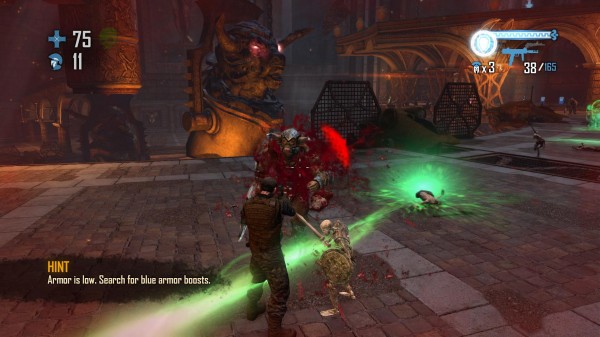 Right in the gullet!

Saying God Mode does a good job of being a budget priced game may seem like an underhanded compliment, but what is being offered fits quite snug in its ten dollar package. There’s definitely a place for these games, though I don’t see it taking the place of the heavier hitters in your library. Still, God Mode’s low barrier of entry is only going to simplify your journey to bro-op boom town and that’s never a bad thing.