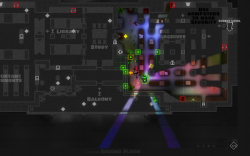 Such a cool blueprint.

Monaco: What’s Yours is Mine was winning indie game awards way back in 2010. Not bad for a prototype.

Monaco will have you build a crew of thieves from a set of 8 character classes to “case the joint” and complete the perfect heist that Hollywood will surely use to make its next great movie. The top-down perspective, narration, special abilities of each character, and teamwork featured in Monaco has me ready to reserve a full game couch session with my favorite gaming crew.

Anyone who got a glimpse of it Monaco back in 2010 was in for a long wait that is finally about to end. Everyone will be able to take part in this 1-4 player co-op heist game in less than a week when it is released for PC and XBLA on April 24th.