I’ve always wanted to love Tomb Raider. When I bought my PlayStation, I stocked up on the first three adventures of Miss Lara Croft and her tomb stories. However, I never found myself hooked or willing to overcome the control hurdles I faced amidst the temptation of exploring. It wasn’t until Legend that I completed a Tomb Raider game, but it felt like the opposite of what I wanted from the series. I’m proud to say that Lara Croft and I have finally clicked on all cylinders. Adventurous, harrowing and brutal, Tomb Raider is an exciting, yet sometimes shaky, romp in the shoes of a Croft learning what it truly means to survive. 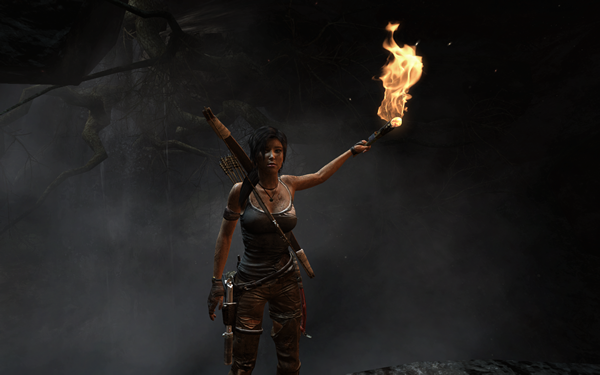 Before lighters and safety regulations, this is what die-hard fans did at concerts.

Out of the frying pan

Origin stories are quite the gamble, especially when taking established icons and attempting to redefine their notable traits. Unlike her more confident and smarmy predecessor, this new Lara is far less seasoned. It should come as no surprise to me that my favorite characters weren’t likely to be child prodigies in their given professions (toddler James Bond might be the exception), but Ms. Croft’s return feels fresher this time around than previous releases. Aside from her creepy mansion butler, I’d hardly been able to associate Lara as having many friends or spelunking partners. Marooned on the island of Yamatai with the rest of the crew after a storm strikes their ship, Tomb Raider‘s focus seems to be on reuniting with the other members in a grand rescue mission and hauling butt back home. Luckily, that’s just the start of it and Tomb Raider is a story of Lara Croft coming into her own. 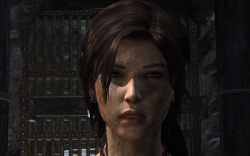 This is the face of a history buff… and a killer.

I say luckily because the ratio of truly interesting characters on display here is fairly low. There’s the salty old sea captain, the tough and opinionated black woman and, of course, the wise older mentor. They aren’t poor in execution, but Lara shines so much brighter than they ever will. She’s trained and knowledgeable enough that I wasn’t put off by many of the risks she would take just to reach her destinations or how she came to conclusions about the island’s mysteries.

The people in Tomb Raider didn’t knock my socks off, but the island of Yamatai impressed me two-fold. It’s no prime vacation spot, but the interlinked and dangerous vistas are incredible to behold. The flow in which Lara traverses the island is steady and keeps the sightseeing at a perfect pace, crawling away from the coastal beaches and deep into the snow-capped mountains. It’s truly an archaeologist-survivalist’s playground. I’m no stranger to making attempts to see all a game has to offer, usually to my eventual failure and/or disinterest. Tomb Raider is no such game, inspiring me to explore to my heart’s content and gather all of its collectibles ranging from oddly-placed GPS caches, ancient historical relics and hidden tombs. Gotta raid them all! 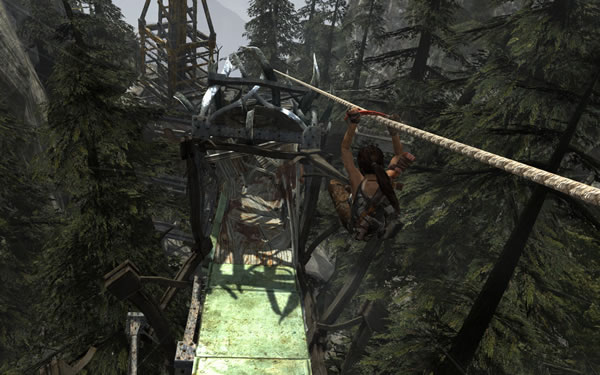 This rope leads into a pointy trap… April Fool’s!

Yamatai contains a lot of interesting treasures and locales, but it also has a bit of a cultist infestation. This is where Tomb Raider falls into a bit of a small rut as Lara finds herself in a bevy of combat arenas, single-handedly ending the lives of dozens of crazed men faster than an exploding clown car. That’s not to say the combat itself is clunky or devoid of fun, but it places a skewed focus on a side of Lara that is closer to a Tarantino film than a struggling young archaeologist at times. Lara’s introduction to the world of self-defense is handled well, but the body count soon grows at an almost alarming rate as she journeys on. The drama of the early kills devolves into comedy as waves of goons charge into her awaiting cross-hairs in the name of challenge. 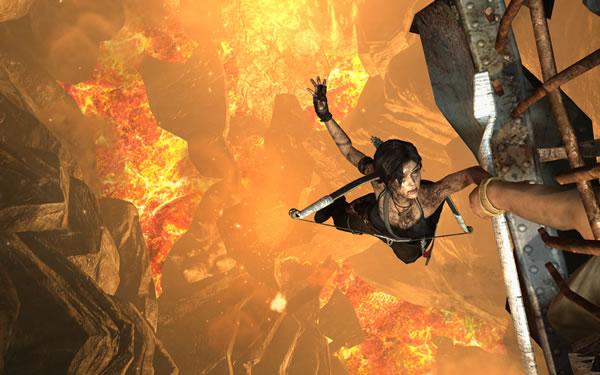 I learned how to survive this in one of my history books!

The arsenal in which Lara becomes proficient hits the usual notes of the familiar pistol to an assault rifle, slightly bizarre in nature but in keeping with that action-adventure desire to put down several attackers in seconds. As Lara explores, she gains experience that offers her a wealth of skill points to spend on being a better hunter or more aware of her surroundings via her Instinct, a quick scan of her local area to notice wildlife, collectibles or the path forward. The true standout is the bow and arrow, which seems more at home in the hands of Lara than a booming shotgun. As much as I wanted to recreate the old Lara with dual pistols in hand, I was more interested in a Lara that could sneak through the brush and fire arrows at any would-be threats. After a number of upgrades, that stealthy power fantasy was not only fun but more believable than her transforming into Rambo.

Tomb Raider is exactly the kind of game I’ve been waiting for to know why I should like Lara Croft. She’s not perfect. Here, she’s quite human. She might come off as extremely lucky or overpowered at times, but her confidence and talents are put to the test. The island is the perfect teacher to develop her into the Raider of old, even if the violence and other characters felt more like necessary warts. I’d go adventuring into the dark unknown with this Croft again anytime.

Value score:  4/5– Tomb Raider is a trip that I didn’t want to end, but it does best not to overstay its welcome. The thrilling action kept me playing onward and my need to collect gave me incentive to explore Yamatai as much as possible. There is a multiplayer offering, but it’s very diversionary and lacks the personality that candy-coats the single player experience. If Tomb Raider is on sale and you’re looking for the summer blockbuster of tombs, pick it up. Just don’t forget to pack your trusty climbing axe.