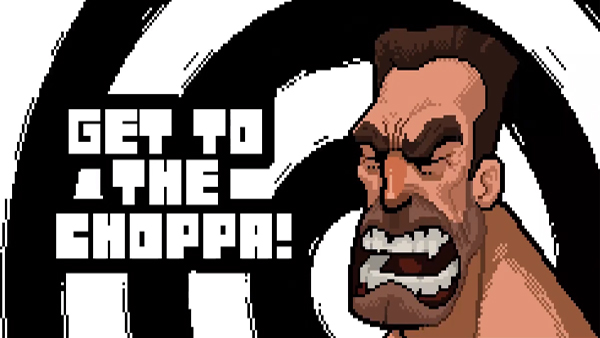 There is rarely a time when getting to the chopper is not super serious.

Free Lives Games recently posted a video on Youtube showing off some early game footage of one of the many competitive modes that will be included in their upcoming ode to all things bro, Broforce. Called “Choppa Run”, 2-4 bros are tasked with scaling to the top of hazard filled towers in hopes of being the lone occupant on a rescue helicopter. While the idea of bros competing against one another may seem a bit counter-bromantic, steel sharpens steel and I’m sure any bros lost to this mad dash to safety will rest in peace knowing the proper bro made it out alive.

I really can’t imagine being anymore excited about Broforce and this footage is icing on an already scrumptious cake (butter creme icing, not that cheap ass plastic tasting crap they use at grocery stores). I’m no Michael Pachter, but Broforce may just be the game that unites the world under a banner of peace, prosperity and friendships that begin and end with this handshake.