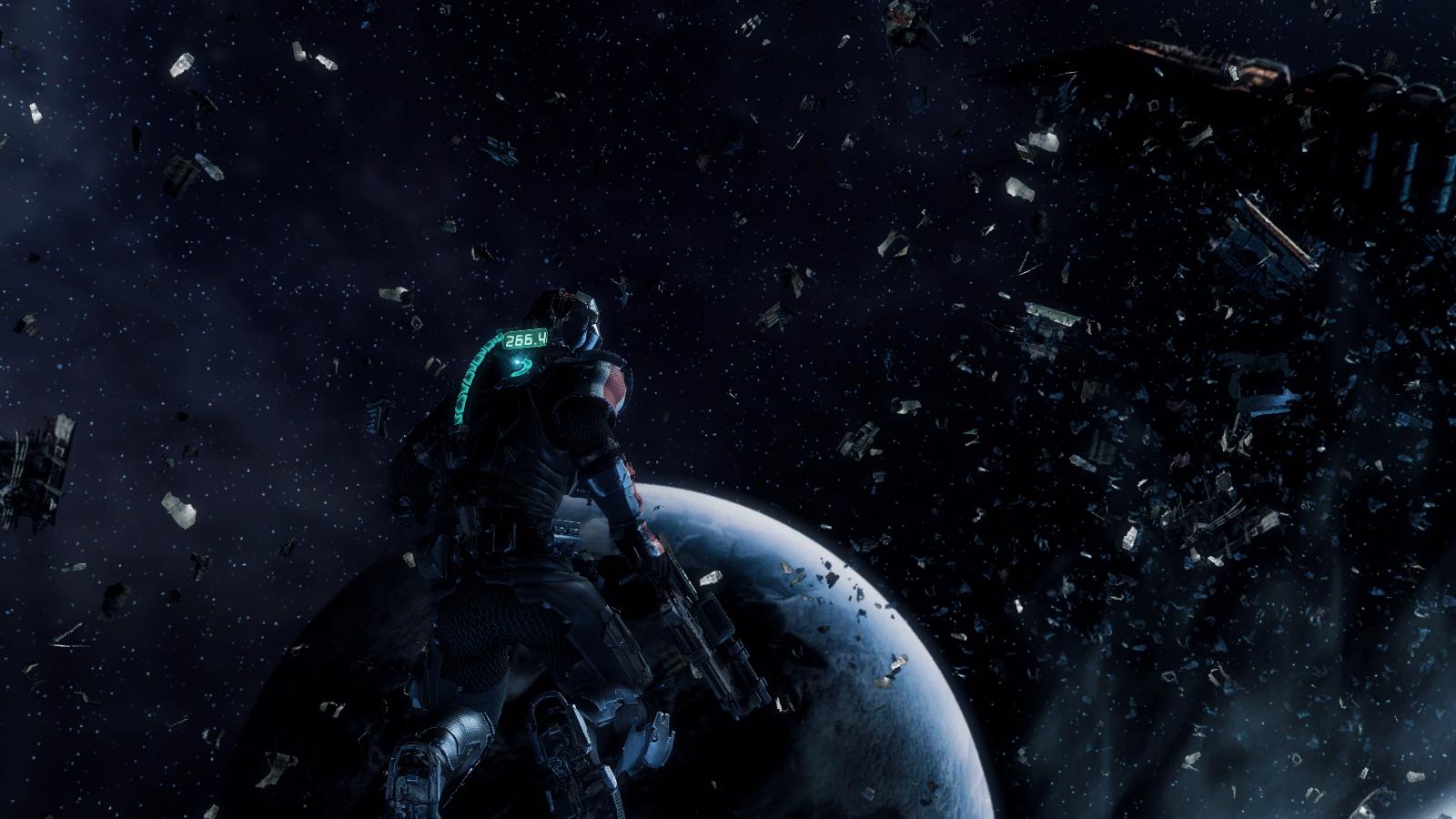 Being a space engineer is a hard life. They’re expected to take on a myriad of tasks, whether it be repairing derelict ships or forcibly removing a mutant’s legs from its disgusting torso. What, then, could possibly make these tasks easier on a guy who just can’t seem to get a break? How about an extra set of hands for shooting and feet for stomping? Maybe it’s the inclusion of a partner in Dead Space 3 or the fact that I’ve done this twice before, but I now feel like an expert in all reparation and amputation affairs. It’s less confined and leans toward even more action, but I still had a lively time spacewalking with a friend. 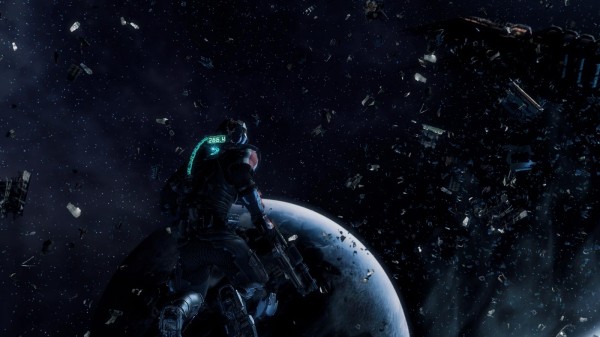 Fly me to the moon

Dead Space 3 continues the out-of-his-mind adventures of Isaac Clarke, clearly making an effort to retire from his life of madness and just eat junk food in piece. Like most intelligent people who have ventured too far down the rabbit hole, the straight-edge days don’t last forever. Thanks to his new soldier partner John Carver (they are NOT friends) and the insane cultists who worship the Markers, source of all that is insanity, Isaac gives the hero gig another go. If you’ve played the first two games, most of the events in action here will make sense. Luckily, newcomers can just rest easy knowing that monsters and gun-toting lunatics are problems best solved with whatever weapons you fancy. 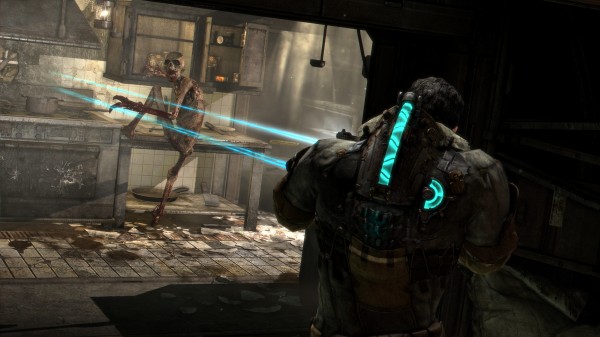 Well-crafted atmosphere and tension were reasons I grew to enjoy Dead Space, yet this third outing focuses more on an atmosphere of action and, well, crafting. Experimentation is pushed to the forefront this time, with Isaac and Carver looting the environment for resources and parts to build their own tools of destruction instead of gradually obtaining new ones. Want the iconic rotating plasma cutter? You can build that, but what if you prefer a rocket launcher with an under-slung flamethrower instead? Build that thing at the nearest crafting bench! Granted, now each player can only hold two weapons instead of four, but it’s easy to deconstruct and swap out for any occasion. The downside to all this looting and shooting is that levels become more like dungeons, ransacking the environment and enemies for that next great upgrade instead of pure survival.

Tiptoe through the debris with me

That’s not to say Dead Space 3 isn’t fun. It’s just a different kind of entertainment in a familiar sci-fi horror body. For instance, playing the game cooperatively tones down the suspense I felt from any given ambush by the ugly-as-ever necromorphs, the mutated remains of ship crews, soldiers and research teams. Whereas previously, the tension came from using all your tools to slow down and dismember the enemies before they could overwhelm you, this time around, a partner having your back meant that a face-hugging rocket was never too far behind to grant some breathing room. That very familiar loneliness and survival is still there when playing solo, but co-op play does have its own perks in the form of a few optional quests. These are framed around the back story of John Carver and are presented in such a creepy way that I found myself enjoying the tingles down my spine. As more games make a push to include online features, techniques like this should definitely set the tone for how to freak people out when they’re not alone. 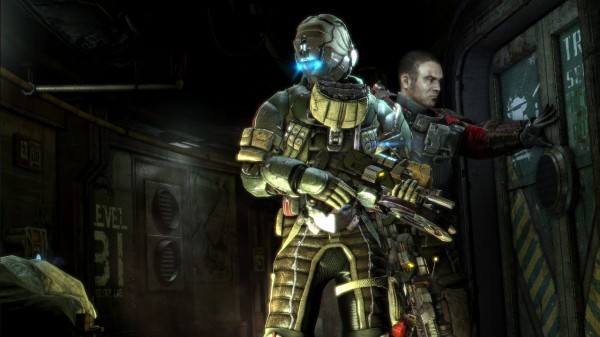 Not scared or anything, but maybe you should go first.

Outside of the optional questing, the rest of Dead Space 3 just feels a little too tried-and-true at this point. There are a few moments where the adrenaline starts to pump and the introduction to the snow planet Tau Volantis is cool (no pun intended), but nothing really compares to the horrifying images and sequences found in the first two games. Necromorphs are still in love with smashing through vent covers and Isaac can meet his fate in a number of grisly ways, but it’s nothing too surprising to fans. Isaac and Carver begin to feel like superhero badasses after a while, dodging enemies  and stomping their remains into a fine powder. None of that is as truly bothersome as the number of load-screen hiding elevators I found myself in from start to finish. It keeps you immersed, but, when staring at the same four walls suddenly becomes a subject of conversation with your partner, it starts to wear thin. Disappointingly, there’s no music in them either. I thought this was supposed to be a horror game.

Two heads are better than none

I find it hard to fault Dead Space 3 for being what it is: a less scary, yet equally bloody, buddy adventure. When the terrifying groans and screams of the necromorphs are familiar and the process to end them is second nature, this entry went in a direction that ultimately squeezed a little more entertainment out of wearing space boots in this hostile environment. It’s still enjoyable to stomp necromorphs and offers several incentives to play through it multiple times on many difficulties for upgrades and unlockable bonuses. Just remember: if you’re gonna get torn apart, it’s better to get torn apart as a team.

Value score: 3/5 – Dead Space 3 is both more and less of what I wanted from a sequel. The story continues, necromorphs are aplenty and the stomp continues to be loud and satisfying. It tries new things with weapon-crafting and co-op, but the scares are diminished and certain sections start to drag  with a heavy focus on back-tracking and item fetching. There are microtransactions for items like outfits and resources, but I never touched the stuff and my experience still felt complete. The scripted moments may not be as memorable, but I got a lot of laughs and shouts when a friend was along for the ride. If you’ve got a willing partner in crime, it can be very worth it. If going alone, don’t be afraid to save some cash.