I felt a lot of anger this week reading through thew news. The possibilities of NBA Jam on the 360 are frustrating me, and the ugly face of classic gaming will not go away. It is my hope that Billy Mitchell is a villain in the newly announced Batman: Arkham City. Give me a challenge room with 20 versions of this douchebag. The bright spot of the week? Renewed hopes for Metroid: Other M. 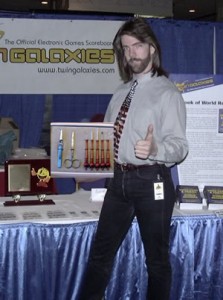 You are not the face of gaming

23 headlines distracted us last week, in reverse chronological order here’s the best from that list.

7 High-End Gaming Headsets Tested and Reviewed! – Tested
7 reviews, and still no clear winner on the consoles.

EA Announces Create, A Game About…Creation – Giant Bomb
Seems like a type of game that is definitely missing for both EA and the 360 (even though it’s on all platforms). Time will tell how different they make this from LBP though.

NBA Jam HD Is Coming, But You’ll Have To Buy Elite 11 To Get It – Giant Bomb
This is just bullshit. Why would the Wii get the exclusive full version of the game? Makes no sense EA. I “may” have shelled out $60 to try NBA Elite, IF NBA Jame HD was fully featured. This is a joke.

Torchlight II announced for Spring 2011 – Destructoid
I really hope this gets out before Diablo III. Oh, and if you didnt notice 2.5 words – online co-op

A Brief History of Castlevania: Part One – G4
To help set the mood for HoD.

Batman: Arkham Asylum 2 Now Officially Batman: Arkham City – Giant Bomb
Just a flat out awesome cover, and my worries about the title are put to rest. Now if the gameplay can evolve without breaking, Rocksteady will really make a name for themselves.

Getting that retro feeling with Metroid: Other M – Destructoid
Uhoh. My hopes just raised for the first time since the original announcement for this one. “Perfect blend of old school mixed with some fresh new takes on gameplay.” Yes. Please.

Guillermo del Toro’s videogame deal is with THQ – Destructoid
Gotta give it to THQ for continuing to try new ideas and getting del Toro involved can only help.