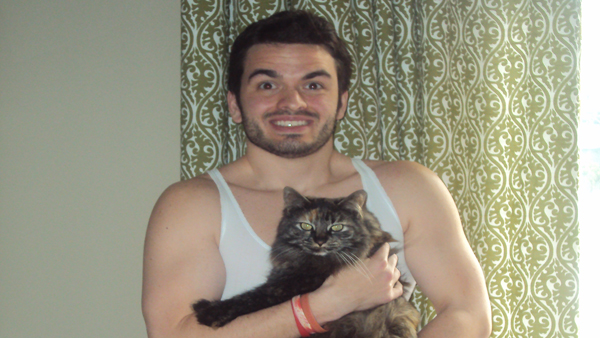 My cat and me during better times.

Like many of my fellow gaming fanatics, I am a cat owner. I wasn’t always a cat owner, but my experience with dogs during my younger years made me realize that I’m not quite ready for the responsibility that owning a canine entails. Cats are inherently independent and rarely require much outside of a clean littler box, fresh food and a congenial nod in their direction every now and again. The biggest problem, however is that my cat, Scuffles, and my interests intersect at a very inconvenient destination: my computer.

I Don’t Want Your Attention Until I Do

For the most part, my cat keeps to itself and licks its butt while occasionally gallivanting through the kitchen like a dramatic reality show starlet (which is strange, given her rural upbringing). To her, I am but a servant tasked with keeping her fed and safe, like Kevin Costner in the Bodyguard minus the romantic interest (and the feeding). Yet for some reason, the second I sit down at my computer, she decides its time to show up and work as hard as possible for my attention. This tends to involve swatting at my controller cable, walking in front of the monitors or literally knocking the router onto the floor.

Should I be working on a non-game related project or playing a game by myself, this isn’t too much of a problem outside of being very annoying. Unfortunately, I enjoy playing games with my online bros and Scuffle’s behavior can be problematic for my multiplayer credibility. First off, the distraction of an attention seeking feline is enough to draw my eyes away from a crucial game related mission, like shouting words of encouragement or performing daring actions. A second in terms of game time is like an hour in real life and makes all the difference when everything is on the line. She doesn’t understand this, regardless of how many times I explain it to her.

The most damaging incident of cat distraction occurred while doing a dungeon run in The Secret World. I don’t play MMORPGs that consistently, which makes me a perpetual noob (which I never knew offended me until just now). When I finally got accepted into a group, I was nervous but fully prepared to do my part. I had a crucial role (shooting at things) and needed to be on my A-game but Scuffles was not prepared to let me have my day in the sun. Right when we were about to take out a boss during the “Hell Raised” scenario, she lept upon my keyboard and then got tangled in the cords of my headphones. In the short time it took for me to grab her and set her down on the ground, my DPS character had wandered straight toward the boss resulting in a chain of events that got a myriad of frowny faces from my team. I took a TSW respite for a while after that.

Sorry for ignoring you all day, let’s play right NOW!!

Secondly, due to frustration I tend to raise my voice at the cat (which all cat owners know is the least effective way to communicate), often times forgetting that my teammates have to deal with a jump in volume that could be painful to their ears. Not only that, but I’m yelling at a cat like I’d yell at a guy that just cut me off, which not only affects my credibility, but also brings into question my mental state and lack of non-animal friends. I can only imagine someone asking, “What’s wrong with that guy?” and getting the response “Oh, he and his cat just aren’t getting along right now”.

Let’s not even get into the fact that her cat hair finds its way into the eyeball of my optical mouse, thus causing weird issues with my controls that can only be rectified with tweezers. Have you ever seen a grown man tweeze hair from a mouse? Have you ever seen a child do the same thing? Either way, it looks really really stupid.

I thought about bugging her when she’s playing, but she’s way too fast and actually really likes it when I get down on the ground and push hair ties around on the floor. Wait, let me rephrase that; she likes doing that for about 5 minutes but moves on very quickly. Me giving her a taste of her own medicine would be a 24/7 job, especially given that most of her play time occurs at night. Do I really want to walk down the road where chasing a cat around and trying to disturb her in the middle of the night is an acceptable use of my time? 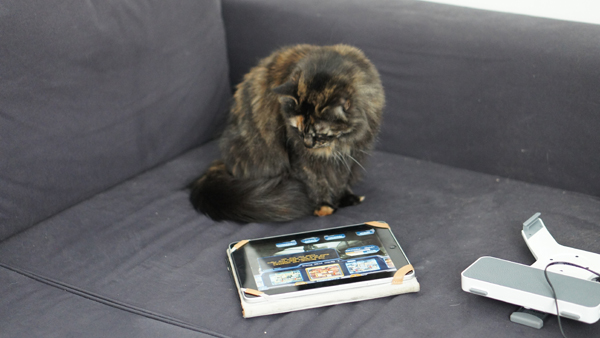 This strategy always works with my wife, infrequently with Scuffles.

None of this is cause for disowning Scuffles because she’s been one of my greatest allies during the last few years and in this competitive world, allegiances are in short supply. That being said, I wish we could just sit down and have a good heart to heart about it. Perhaps it’s my fault, perhaps I’m just a horrible cat dad that forgot to teach his oldest cat child the value of respect. The thing is, these problems only occur when I’m playing video games! Should I get her a control? Too late, tried that and she was an absolutely horrible co-op teammate.

If anyone happens to have experience with this sort of issue, please let me know. It’d be great in book form since that’s more legit, but I’d also do with a series via MP3, something I could listen to on my thought walks during the day. If you have similar issues, let’s talk about it, maybe even form a support group.

I guess at the end of the day, when your biggest problem is a cat interrupting your video game sessions, perhaps things aren’t really all that bad. Look at that, I just came full circle on that subject, a bit like a cat chasing its tail. Looks like we all just got M. Night Shyamalan’d a bit on this one.