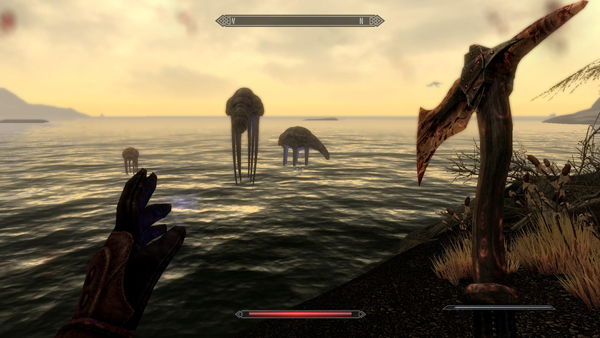 To me, Skyrim is like a buffet that I have to continually step away from for fear of over indulging to the point of illness. As great as it is, a man can not live on bread and Skyrim alone, especially a man who has to maintain a high level of gaming diversity in order to feel “caught up.” That being said, I tend to sneak back to the digital feeding trough that is The Elder Scrolls V whenever something fresh is introduced, regardless of my apparent fullness. To me, the Dragonborn DLC, like Dawnguard before it, is yet another serving of an entree that I can’t help but gorge myself on to uncomfortable levels of fullness.

Who Be Jumping Me?

When I popped back into my latest save point in Skyrim, I’d almost forgotten that I’d purchased the DLC earlier in the week. While walking back from a delightful afternoon in the town of Falkreath, I was ambushed by some wizard folk clad in squid adorned masks that I’d never seen around those parts. I was shocked at first, but then realized that these must be the minions of a fellow Dovahkiin who wasn’t too enthusiastic about me also holding that title. His name was Miraak and since he was the original Dovahkiin, he felt it necessary to remind the world that he was the first and I was but a poser trying to look cool. That’s right, the antagonist of the latest DLC is a power hungry hipster.

The thing is, I’m not a hipster and neither is my Skyrim character. We are, however, red blooded Americans and when someone pushes us, we push back and thus we made for the island of Solstheim. To be honest, I was hoping for a bit more from Solstheim as the landscape wasn’t too different from Skyrim, outside of a continually erupting volcano and some giant mushrooms. Sure, the city of Red Rock has houses that look like the submarine from 20,000 Leagues Under The Sea and the occupants of the island wear pieces of insect carapace as armor, but don’t expect a dramatic palette change. I blame my unrealistic expectation that this DLC was going to visually wow me in the way The Shivering Isles did, but I admittedly don’t have a complete grasp on the Elder Scrolls lore, which would have tempered my expectations a bit. 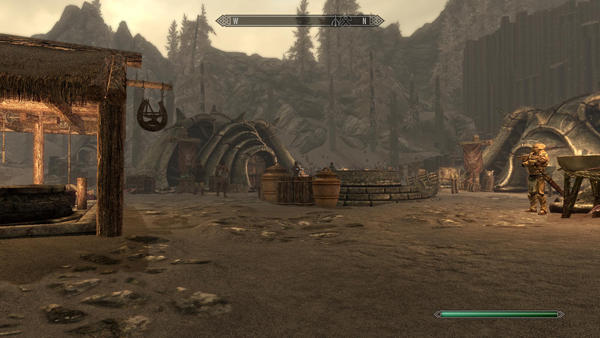 One of the more unique areas featured in Dragonborn is the realm of Hermaeus Mora, a Daedric Prince and keeper of forbidden knowledge who actually sounds like someone who keeps to themselves and reads text books all day. He lives in a world filled with slime and penis shaped stacks of books, a confusing maze of a place that is quite Lovecraftian in its accouterments.  Journeys to this realm are integrated into the main quest line as well as side quests that task you with recovering evil black books (which can be used to grant certain bonuses or allow you to redistribute skill points).  I would have preferred to explore this realm on my own as you’re funneled through these areas in a very linear way, which kind of takes the juice out of the concept of being transported to a different dimension.

A Zoo of Possibilities

A couple Netch washing off their weiners in the ocean.

There are a number new enemies to contend with, such as the Ash Spawn (undead warriors composed of ash), some denizens of Mora’s realm who solidify the Lovecraftian aesthetic and my personal favorite, the  jellyfish-like Netch. The island also hosts a crap ton of spider variations, the most annoying of which explode when they get close to you. Oh, and I don’t want to spoil anything, but let’s just say werewolves aren’t the only were-beasts you’ll encounter. The additional creatures do help Dragonborn stand out a bit as it’s exciting to come across an unexpected newcomer during your adventuring. Though they won’t be quite as happy to see you. In fact, they’ll try to hurt you or worse, mash your private parts off.

Speaking of adventuring, Dragonborn does offer a host of quests, including the main quest line so you’re not going to necessarily get bored while you’re there. That being said, you won’t really be doing too much that you haven’t done before. The main quest itself was a bit underwhelming outside the introduction of Mora’s realm, but once you’ve killed one demigod, you’ve killed them all. Again, my indifference may have quite a bit to do with the 100+ hours I have put into the game, though seeing as that seems like the demographic that will go after the DLC, a bit of spice could have been injected into the plot. I’d almost have preferred to just hang out in the mushroom village with the rusty old silt strider and do some Skooma, but the pressure to save everyone from evil was too much.

There are new weapons/armor to find and craft on top of everything else in the package. These were things that I only wore to fit in better with the locals since I was already sporting armor and weapons made from the BONES OF DRAGONS. After a while, I realized that I should just wear the dragon bone suit because no one really gives a crap about fashion and folks don’t screw with dudes covered in dragon.

But I bet you heard you could ride dragons right? That is indeed true, but the thrill of riding around on your primary adversary loses its appeal after the first time you do it. It’s just not fun. You don’t really have much control over the dragon and from an offensive perspective, you seem to lack the firepower that was used against you again and again by less friendly dragons. It’s a novel addition but nothing to write home to Mom about and definitely not something that will change the game. 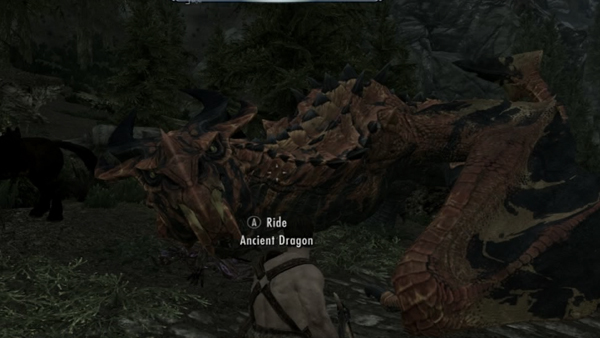 Your butt is going to be so sore when I’m done with you.

Dragonborn does quite a bit more than Dawnguard in terms of offering up new content for players, and I think people will be happy with a new place to explore even though it’s not exploding with wonderment. At the end of the day it’s more Skyrim, and if you’re filled to the brim like I am, that may not be as satisfying as it used to be.

Click below for the video version of the review that may or may not have gotten a bit off track: