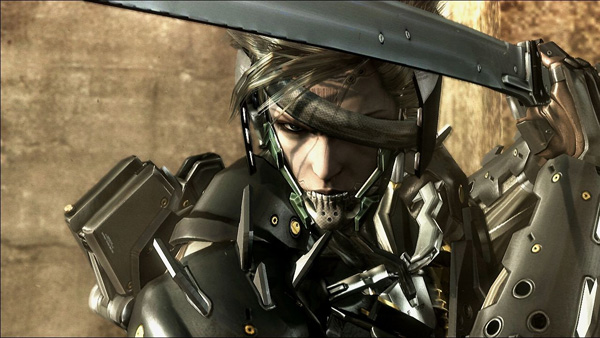 Before you become solid, you first have to rise… That is not the tag line for Konami & PlatinumGames’ Metal Gear Rising: Revengeance. Our barely competent duo of Justin and Josh fumble through the demo for Revengeance, doing a terrible job of dodging missiles and chainsaw dogs. Plenty of bad guys get diced up real nicely, though.

It’s hard to still hate you when you look like this.

I’ve been looking forward to a Raiden game all year, that’s the power of PlatinumGames. Metal Gear Rising: Revengeance has had a tumultuous development history and I honestly wrote it off a year ago as a game that would never come out. However, recent trailers and a release date right around the corner have gotten my hype juices flowing not so much for a Metal Gear game but more so for a stylish action game where I have the opportunity to slice robots into tiny bits with a sword.

The intro to the Revengeance demo felt distinctly Metal Gear with a surprising amount of time spent on cutscenes with hard to follow story and odd bits of humor. Not that I don’t enjoy a good ridiculous Metal Gear story, but get out of my way, I’m trying to slice dudes up in a demo. Therefore, by the time the action started I just wanted to get to it and admittedly I skipped through the tutorial scenes a bit too quickly. I advise everybody to take their time and get to know Raiden’s controls before putting him in harms way.

Once I got the hang of things, you know, at the end of the demo, I did feel like a bad ass cyberninja. Mission accomplished there, Platinum. There’s definitely a distinct way that Raiden is supposed to be controlled and I dramatically underestimated the learning curve. There’s nothing wrong with that, just don’t expect the most accessible game out there. However, the highs I got from pulling off acrobatic combos and finishing moves definitely made me want to get better and play more. Add in a crazy setting and that ever-intriguing Metal Gear universe combined with Platinum’s sense of awesome and MGR: Revengeance has the makings of a truly awesome experience for fans of action games. It could also completely fall on its sword if its core mechanics do not get easier to understand, but at least you will look good while doing it.