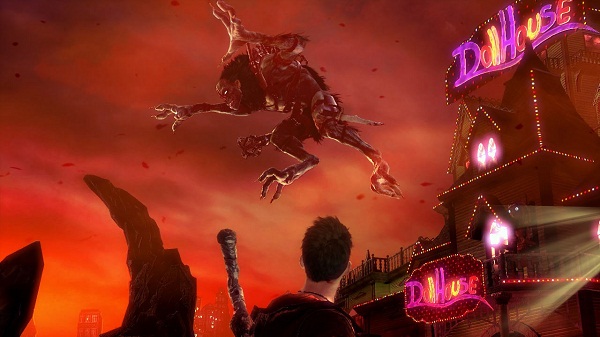 Check out this sweet SportClips commercial! It features (besides nice haircuts): Almost male genitals, stripper panties, carnies, too much plastic surgery, Not-Kingpin, shooting & stabbing, two dudes with the initials JL … and so much more!

Let’s just say that Justin and Josh may not know what actually happened this Game Curious episode for DmC: Devil May Cry, but they love what happened to them because of it.

This video is intended for an mature audience as our commentary is not kid-friendly.

Who is hunting whom, here?

It’s funny how pivotal the Devil May Cry franchise has been to my personal gaming history, yet it’s not a series I’m emotionally invested in. I’ve enjoyed #1 and #4 in the series and Dante is pretty much an iconic character to me at this point. However, the franchise had run its course, so when it was announced that Ninja Theory was working on a reboot, I applauded the idea. Ninja Theory brings some serious narrative chops to its games, but it hasn’t quite hit the mark yet when it comes to the gameplay-and-action side of things. DmC Devil May Cry was shaping up to be an interesting experiment.

Of course, all of my analytical mindset was thrown out the window the second the intro to DmC enveloped me in a stylish 90’s action movie. DmC is the epitome of trashy fun, and encourages you to smirk right along with its vision of Dante. Dante is a punk kid, but he has some serious combat skills. Ninja Theory also did its research because the mix of sword and gunplay feels distinctly like a Devil May Cry game with the added bonus that it is much more accessible. Purists will get upset by the initial lack of difficulty, but if infinite combos without taking a hit are your thing, there are difficulty settings available for you, too.

While DmC’s plot, and any devils vs angels storyline, for that matter, cannot be approached with a Shakespearin’ critique, I have to say the intro pulled me in. I have much more of an understanding of this DmC universe than I ever did through 3+ games of the last one. I’ll also say that it has just the right amount of story setup for a character action game. It doesn’t drag on or interrupt the action, but it does a good job of pushing the player forward to the next major action arena which is what character action games should focus on.

Speaking of characters, while this Dante isn’t the same Dante, he’s still a great Dante with plenty of attitude, one liners galore, and the moves to entertain the masses. The enemy design is also better-than-it-needs-to-be. All of the pieces are in place for DmC to be a bigger hit than anyone had any rights to expect.