If it’s not Groundhog Day, Congress is back in session.

Is anyone feeling deja vu-ish? We’ve got another debate about the debt ceiling, the EU may-or-may-not collapse like a house of cards (again), and we’ve got legislators (one federal, this time) proposing bills that are so clearly violative of the First Amendment to the United States Constitution that I can only imagine two scenarios where the crafting of these bills were possible: the representatives are pandering idiots or their entire staff, which tends to draft the actual bills, had a five-martini lunch and got the giggles.

First, we’ve got Missouri House Bill No. 157, which Representative Diane Franklin brought to the floor in Jefferson City, that proposes a 1% excise tax on all “violent” games receiving a Teen, Mature or Adults Only rating from the ESRB. Let’s leave the idiocy of that phrasing alone for a second and move on to what is to be done with the money: it’s intended to go to Missouri’s general revenue fund solely for the purpose of treating “mental health conditions associated with exposure to violent video games.” Here’s the text of the bill.

The second bill we’ve got cooking is in Washington D.C., where clearly they don’t have enough to do, is this charming little piece, otherwise known as HR 287, courtesy of Congressman Jim Matheson from the 4th District in Utah. He proposes that Congress adopt a bill that would require an ESRB ratings label on all video games, prohibit the sale of adult-rated video games to minors (18 for AO, 17 for Mature) and levy civil penalties up to $5,000 per violation against any retailer that didn’t follow the rules. Here’s what the House Committee on Energy and Commerce will be looking at.

If you’re interested, you can see my highlights on the proposed bills here and here

If you’ve read any of my analyses of the First Amendment and video games, you probably have a good idea of what’s coming. If not, grab a pen and some paper because if I were independently wealthy, this is the kind of law I’d be practicing. Let’s start with Representative Franklin’s bill. First off, we’ve got the term “violent” as it applies to all games rated “T” or higher. If you’ve, I dunno, ever held a video game in your hands, you’re well aware that a “T” rating can have absolutely zero to do with violence. In fact, in addition to the rating, the ESRB conveniently includes a content description that briefly explains why the game got the rating it did (i.e.: comic mischief, mild lyrics). In addition to being an eye-rollingly stupid assertion to make, the bill is almost certainly overbroad before you get past the preamble: restrictions on speech are allowed, but they must be narrowly tailored, content neutral, for an articulable, legitimate governmental interest and restricted to the time the speech occurs (like, maybe not at midnight on a Tuesday), the manner in which it’s done (probably not with a bullhorn), and the where it takes place (a residential neighborhood).

Levying a tax against a game due to its content is almost certainly the type of law that the First Amendment exists to protect against – as Chief Justice John Marshall said in the 1819 decision McCullough v. Maryland, “the power to tax is the power to destroy.” Then we’ve got the second part of Representative Franklin’s bill, which indicates that the revenue generated from this tax shall be used to fund treatment for those needing therapy for their exposure to violent video games. So, last year, we got a proposed bill in the U.S. Congress from Reps. Baca and Wolf which wanted a warning label affixed to “violent” games indicating that playing them had been linked to violent behavior. I wrote about it here.

That video games, even violent ones, have a deleterious effect on those that play them is largely based upon research done by Dr. Craig Anderson and a few others. It’s been roundly debunked. So roundly that even Supreme Court Justices know they’re crap and say things like “These studies have been rejected by every court to consider them, and with good reason” (Scalia, J. 131 S.Ct. 2729 at 2739 (2011)). So, Missourians, you’ve got a state representative who is proposing a bill that restricts free speech by levying a tax and then turns around and uses that tax money to treat a pathology that doesn’t exist. I’m not saying my state reps are better than yours, but c’mon. You have Six Flags. I expect more out of you. 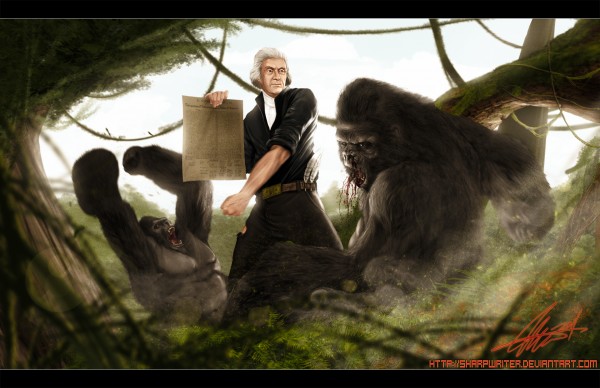 Just to be clear: Thomas Jefferson only fought British mercenary gorillas who tried to keep him from writing the 1st Amendment.

If it’s not obscene…

Out of the U.S. Congress (which is entrusted with making laws for the whole country – glad we’re in good hands) we get a  piece of proposed legislation which would require ratings labels on video games. Frankly, I’m not against the ESRB’s labels. I think they’re great. They’re voluntary and their website is a really great resource for parents to look to in choosing age-appropriate games for their kids. On the other hand, when you start lobbing legislation around, I get a little antsy, particularly when you’re aiming that legislation at a specific medium with specific content that restricts expression with no legitimate governmental interest. 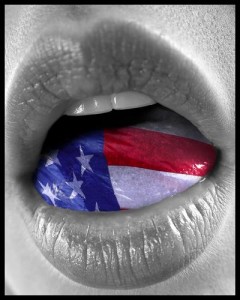 I think this was supposed to be an allegorical reference to freedom of speech, but I’m using it to represent the prurient interests. They have a registered lobby here at Horrible Night.

If you remember Brown v. Electronic Merchants Association from the summer before last (my summary), you’ll recall that while the Supreme Court found that the Government does have a compelling interest in protecting minors, it doesn’t extend to the government deciding which ideas are appropriate for minors’ consumption. Congressman Matheson’s bill does precisely that: it picks the ESRB’s games which are “AO” or “M” and restricts their distribution based upon that alone. Unfortunately for Mr. Matheson, only very specific kinds of speech are undeserving of First Amendment protection. Specifically, speech that appeals only to the prurient interest (obscenity), incites others to take illegal acts or is considered “fighting words.” While it’s certainly arguable that there are portions of some “AO” rated games that appeal solely to the prurient interest, not all “AO” games do. Including “M” rated games in this bill was an even bigger gaffe as we know that games with enormous artistic, expressive value (Mass Effect series, Telltale’s Walking Dead games, Red Dead Revolver) got the ESRB’s “M” stamp. As the Court pointed out in Brown v. EMA, “Reading Dante is unquestionably more cultured and intellectually edifying than playing Mortal Kombat. But these cultural and intellectual differences are not constitutional ones.” (at footnote 4)

While Congress is certainly empowered to regulate interstate commerce (and the Federal Trade Commission is likewise empowered to oversee the regulation in Congress’s stead), it lacks the power to pick one type of retailer out and fine them for purveying protected speech and this legislation should be killed in committee like the affront to free speech that it is.

Destructoid
Joystiq
Digital Trends
Wikipedia
US Government Printing Office
State of Missouri
ESRB
SharpWriter
Special thanks to Dana Nightmare (@SiFNightmare) over at Talk Nerdy To Me podcast for bringing this to my attention.