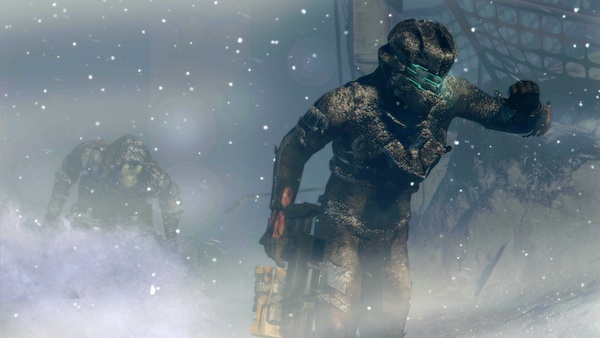 Josh and Justin give the Dead Space 3 Demo a look-see three weeks ahead of release. TLDR version? “Chronicles of Isaac Evil 5” – Josh, “My immersion!!!1” – Justin.

Horror action continues to evolve, and we’ve been tricked by demos in this genre before so it is with great caution that Josh and I approached the Dead Space 3 demo. Of course, it’s hard to find anything terrible to say about the time I’ve spent with Isaac Clarke, I’d just rather him keep his helmet shut and his odds as terrible as possible, that’s all.

Here we are, though, on the ice planet of Tau Volantis (not Hoth), and Isaac has a buddy out there available for co-op. However, we wanted to check out the solo side of things and see if this latest Dead Space is all action or if it can still make us soil ourselves.

While Dead Space has never looked better, it has certainly lost a bit of its punch. Maybe it’s just the change of scenery or the fact that Isaac has already been through hell and back too many times to count, but it’s difficult to be intimidated by anything the necromorphs throw at him at this point. Luckily, it doesn’t matter all that much because blasting the limbs off of foes small and giant is just as satisfying as ever.

The biggest feature that caught me got off guard is the depth involved in the customization options for Isaac’s weaponry. While I’m sure it isn’t a loot fest, it’s a nice change to have to pay attention to what materials drop off of enemies and are found in the environment. Also, Isaac still knows how to die, so even if the lead up to his demise isn’t as thrilling as other horror experiences, the pay off is still sickening in the best way possible.

Whether it caters to the pure horror fans out there or breaks any new ground remains to be seen. Dead Space 3 is looking like a solid action experience and fans of Isaac’s style of shooting should feel right at home. Co-op gamers should also get a unique horror/action experience.