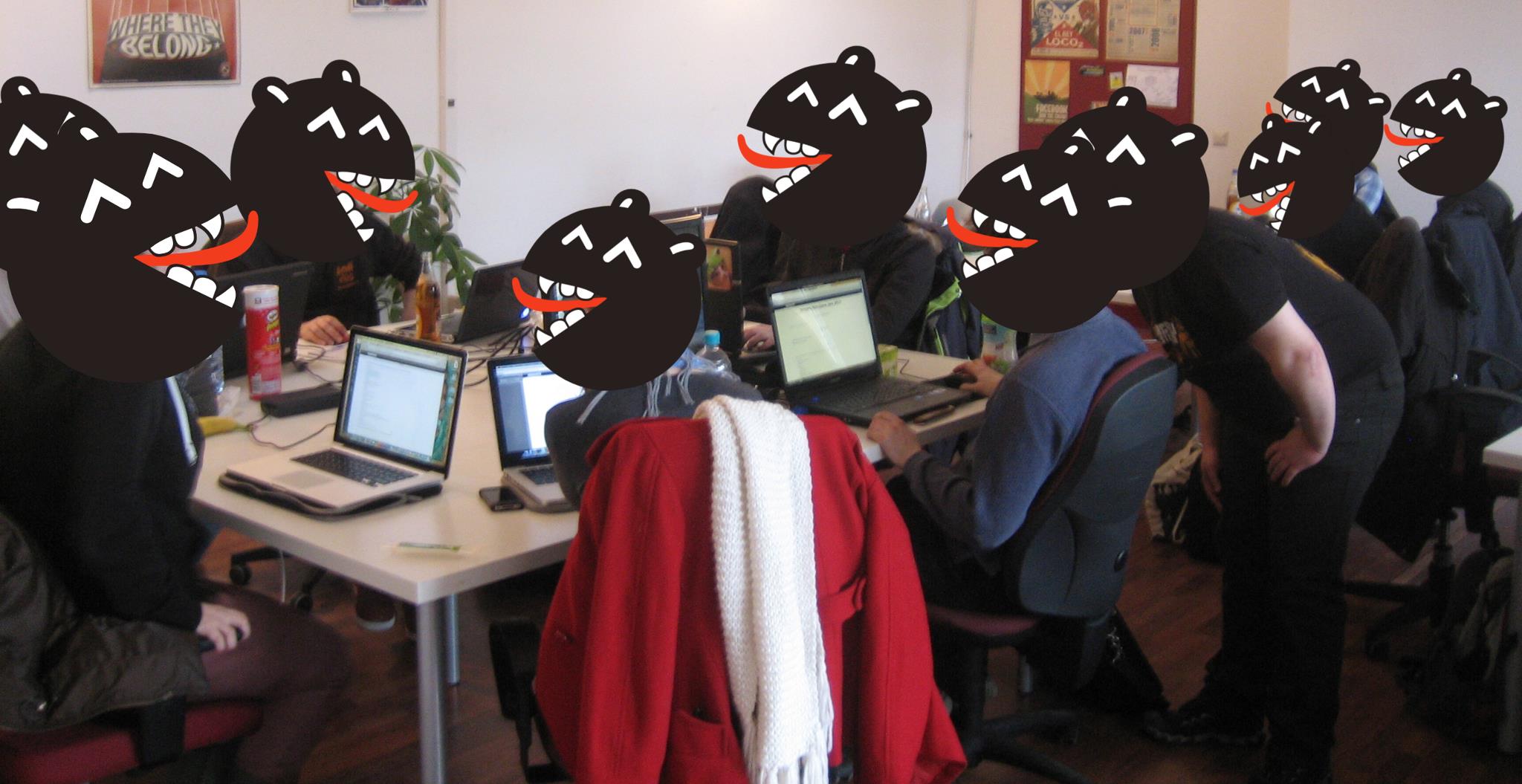 I’ve always dreamed of making video games but was always too intimidated to actually try to learn the magic behind my favorite entertainment medium. As a result, I “settled” for merely writing about games and describing the excitement I feel every time I load up a new title. As a grown-ish man, however, I’ve begun to feel like maybe I missed a really great opportunity to further explore gaming. Being a spectator is great and all, but I’m starting to get the urge to read reviews about my own creations as opposed to writing them about the creations of others. That is why I embarked on my very first game jam this past weekend and am convinced it’s something everyone who has any interest in the video game industry needs to try at least once in their lifetime (or the next should you believe in religions with reincarnation as a benefit).

The Jamming of Games

For those not in the know, a game jam is an event where a group of people get together and try to make a game in a limited amount of time. They are becoming more common nowadays, but I never thought of them as open invitation affairs. To me, it was a time for developers to hone their skills and draw attention to the indie scene or perhaps a special cause. While both are true, game jams come in all sizes and flavors from intense 48 hour develop-a-thons to more casual monthly meet-ups.

Perhaps it’s destiny that I happened upon the particular game jam I attended, known as the Berlin Mini Jam, as I ran into a member of the group at the most unlikely of places. I was attending a very lovely wine and cheese party with my wife, doing my best to refrain from any talk of supernatural entities or my dreams of being a superhero. There’s a time and place for such things and I know for a fact that my enthusiasm for aforementioned subjects (and as a result the volume of my voice) grows as the alcohol content in my blood increases. During the course of the evening I began talking to a guy who happened to be a video game fan as well as a developer. We struck up a conversation about the indie game scene which lead to him inviting me to join a Facebook group called the Berlin Game Developers Meet-Up. Being that I wasn’t exactly a developer, I was a bit shy about jumping right in but the group made the monthly mini jam sound like it was not to be missed. Besides, I could always fall back on the journalism side of things and just video tape the event and ask a few questions should I start to embarrass myself.

Protip 1: Get a good night’s sleep…brain functionality is lessened without it.

I’d made the mistake of drinking till 6am in the morning prior to the event, but for some reason my body pulled itself together for the game jam which was pretty miraculous for me considering I’d struggled with a consistent sleep schedule since getting back from The States. It only took me a quick bus ride and a straight shot on the U-Bahn to arrive at the co-op building that the group met at once a month for the jam. Being that my German language skills are very poor, I was delighted to find that most everyone spoke fluent English (which is somewhat common in Berlin, though, not an excuse for not learning German…I am working on it). My friend from the party introduced me to everyone, a group that day consisting of about 25 or so individuals from all corners of the industry. 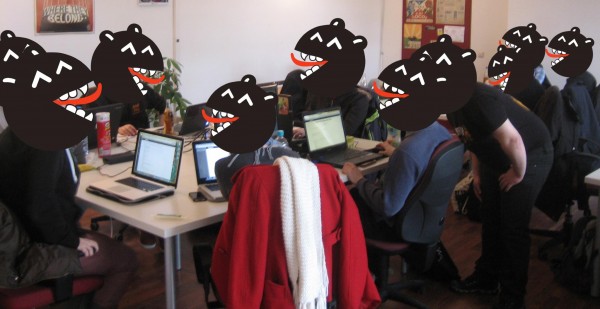 The group votes on game themes once everyone arrives, though no one is forced to follow those themes or even work on games for that matter. While most people do their best to produce something by the end of the day, some use it as a time to seek the guidance of other developers for their own projects or just socialize after a long week of real work. It was a very light atmosphere with people wandering around in between tasks, asking each other about their projects and having more than a few laughs. I felt comfortable immediately, which is probably when I forgot about covering the event and jumped in on a project with my new buddy.

Protip 2: Be realistic, you only have 8 hours

The themes were “Everything is one fire,” “Ponies,” and “Psychedelic,” which we decided to stick with as closely as possible. My friend would be doing the coding and I’d provide the art (I have quite a bit of experience in that department, though I am by no means an artist). We discussed ideas, with me coming up with wild concepts and him laughing and reminding me that we only had 8 hours. We eventually decided on a stealth game where two wolves dressed up in one of those two person horse costumes had to sneak around a farm, setting fire to ponies without the rest of the animals noticing. I think I’d probably be a pretty good pitch man as I explained this somewhat demented concept with the charisma of a used car salesman. After a few nervous chuckles, we decided that the ponies were actually racist, thus validating their live burning. 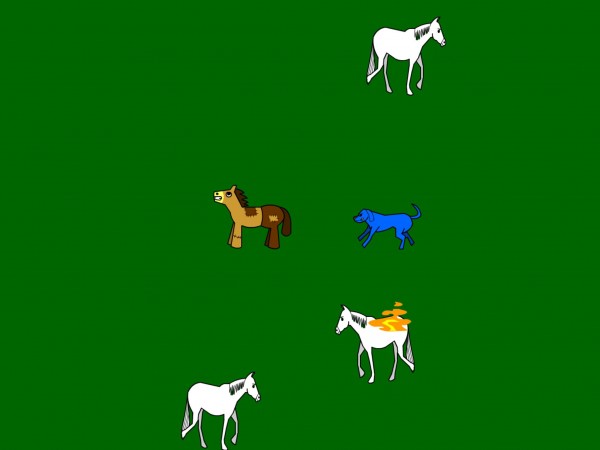 The prototype for “Burn, Pony Burn”.

We spent the rest of the day with him coding and explaining to me how to draw sprites correctly. While I had a bit of an idea how the art and coding came together, it made a whole lot more sense by the end of the day and I developed even more respect for the people who actually make the games I enjoy. There never came a point that we were too serious about what we were doing and it was really fun the whole time, but holy cow was it exhausting. I realize that 4 hours of sleep is never enough, but the amount of effort it takes to keep on task when you’re part of a team is incredible, especially with how in-sync an artist and programmer have to be.

Eventually, the prototype of the game came together and we tested it a couple of times. Due to time constraints, we weren’t able to implement every game mechanic discussed during the planning stage, but I was proud of what we accomplished nonetheless. It actually ended up being kind of a tough game where you (the wolves hiding in the horse costume) had to set fire to all the ponies in order to complete the stage. This was made difficult by the fact that the ponies only stayed on fire for so long (all had to burn at the same time) and a blue hound dog (with the ability to make you explode) was always in hot pursuit. In hindsight it sounds a bit wacky, but it made sense to me. I realize now that if I ever do become a game designer, it will be for a very niche market.

I personally can’t wait until the next game jam. As a result of my time on Saturday, I’ve been drawing and writing a whole lot more. I would have never in a million years thought about attending such an event, let alone participating, but it was well worth it. There’s just something about being around a group of motivated, creative people that gets your brain going regardless of your level of skill compared to theirs. If you’re lucky enough to have a group like the Berlin Mini Jam or the Berlin Game Developer’s Meet-Up in your area, take advantage of the opportunity. If not, start one yourself… there’s no such thing as too many game jams.

Protip 3: Smell yourself before you leave…I only realized about halfway through that my clothes reeked of booze and cat farts. Don’t become the stinky kid.