When I get up around 2,000 words in an article, even my Top Ten Games of the Year, it starts to make Justin L. break out in hives. Pet dander, half of the edible material known to man, pollen, sunlight and a stiff breeze have the same effect, though, so it’s not a big deal. Still, with my record-breaking year in terms of games played, there were a few games that deserved mention either because I still feel the need to vent my colon on them or because they need a little more ‘attaboy before the year runs out (non-2012 games will be askterixed). So which games get Rachel McAdams / Ryan Gosling and which ones get immediately pre-rehab Lindsey Lohan / McCauley Culkin, on a scale of one to five? (Please don’t dwell on how I can have non-integers. Assume either a sufficiently advanced technology or magic.) 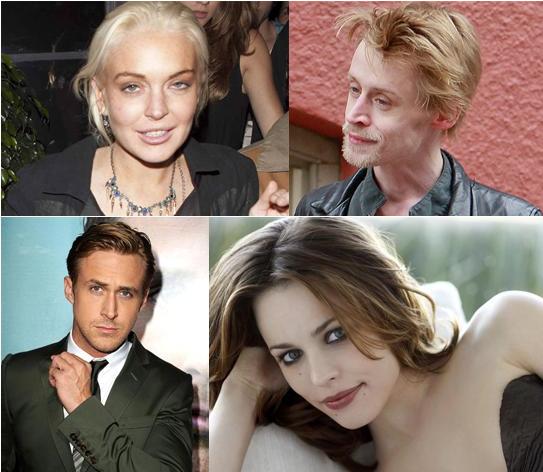 Not to be confused with the Richards/Diamond Constant, where the presence of sex, drugs & rocknroll are considered beneficial.

Lord of the Rings: War in the North* – 3.5 McAdams/Goslings – Unlike a lot of sci-fi, comic book and fantasy series, Tolkien’s estate has been fortunate that it’s had quite a few decent titles dealing with Middle Earth. Although I didn’t get to it right when it came out, I’m extremely pleased that I did play it; my dad read The Hobbit to my brother and me when we were little, so I’ve long had a love for this parallel medieval world. Taking lots of cues from Peter Jackson’s masterwork, LotR: War in the North was sort of dark, had a pretty cool storyline that was independent of, but intertwined with the journeys of the Fellowship. With good action, some difficult-to-decide RPG progression and fairly linear gameplay, LotR: War in the North was a fun slash-’em-up in a universe I don’t get tired of visiting.

Lollipop Chainsaw – 2.5 McAdams/Goslings and .5 Lohan/Culkins – I’ll come right out and say it: This game is Buffy the Vampire Slayer on steroids. On top of that, I think it’s arguable that there’s some very interesting thematic stuff going on beyond the zombies-ate-my-high-school storyline, like an examination of gender roles and emasculation, mockery of hyper-sexualization and whether or not a chainsaw is the best weapon for fighting off the undead. It’s also hysterically funny, which I’ve come to expect that from Grasshopper Studios. The big downer, and reason Lohan/Culkins were applied here, is one that’s also common to Grasshopper Studios’ games – weak controls. Except for achievement hunting, it wasn’t that big of a deal in Shadows of the Damned, but for a combo-driven brawler, tight controls are critical, and Lollipop Chainsaw didn’t have them.

The message reads “ProTip: Dodge RPG Missiles with the help of boost.” What it doesn’t tell you is that the guy who wrote the ProTips is a professional toilet bowl cleaner.

Choplifter HD – .5 McAdams/Goslings and 1.5 Lohan/Culkins – I have fond memories of playing the original Choplifter in computer lab (or fighting for a copy of the disk) back in the mid-to-late 80’s and, for a minute, I got that feeling when I started playing Choplifter HD. It’s slickly animated, the controls are fairly good and when you start out, it’s a blast to play (with some funny dialog from the pilots). Unfortunately, after a couple of hours of gameplay, the nostalgia boost wears off and some of the game’s weaker points start showing through. Choplifter HD goes from fun-and-not-too-hard to this-is-bullshit in a hurry and the progression from one helicopter to the next (or upgrades in the same class) feels inconsequential as you try to dodge bullets, heat seeking missiles, tanks (no, seriously, tanks shooting down your helicopter – it’s ridiculous), jeeps…well, remember those old side-scroller shoot-em-ups like Gradius, where the whole screen would be filled with enemies and bullets? Imagine that, but without the saving grace of a nimble ship. Mayday, mayday, 1985! Your version of this game is better than the shiny, new one.

Spelunky – 17 Lohan/Culkins – For some reason, some of the Horrible Night staff like this game. I’m not one of them, and it’s not because I don’t like Roguelikes, brutally hard games, or shopkeepers who turn murderous if you try to steal from them. It’s because this. game. sucks. It’s not fun. I’m upset that I downloaded it. And I still haven’t gotten over being salty at Justin L. for acting like this was a great game that I had to try.

The Gunstringer** – 3 McAdams/Goslings – I’ll disclose this right now: I love Twisted Pixel’s games. I love the music, the animation and I laugh every time the Powered By BEARD clip comes up. When I heard about The Gunstringer, I couldn’t wait. But then I did, because it wasn’t downloadable at first, which I found odd, but whatever. Anyway: The Gunstringer is funny, cute, family friendly, really weird (like this Superbowl commercial, my favorite ever) and well put together. With the exception of Fruit Ninja Kinect (which comes packaged with The Gunstringer), it has the best Kinect controls of anything I’ve played with the peripheral, and considering it’s the only way to play, that’s a darn good thing. 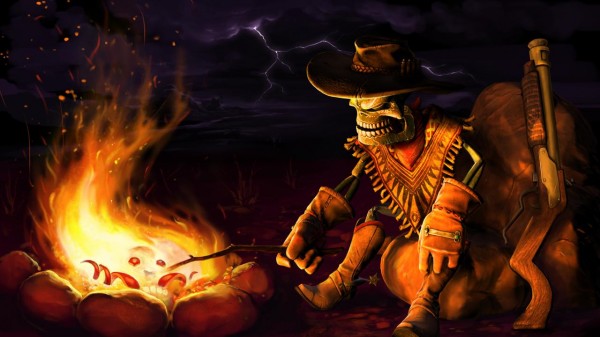 You’d think a marionette would be more concerned about open flames, but The Gunstringer is a puppet on a mission.

I Am Alive – 2 Lohan/Culkins – Although we do have a Not Entertained category in our Grimmys this year, I had to bring up I Am Alive because I had the same reaction to it that most people I’ve talked to have: I really wanted to like this game. Past tense. Having played it, I don’t, so it’s doubly saddled with negatives: It’s not a great game and I was expecting it to be something I would really love. With its bleak, post-apocalyptic setting, scavenge-while-searching-for-your-family plot, total lack of zombies and interesting food/stamina mechanic, this title looked like it was right up my alley. Having played it, it’s boring, the controls aren’t very good, the interaction with the world’s denizens are frustrating and the plot wanders off into the fog as you play.

You Don’t Know Jack*** – 5 McAdams/Goslings – This isn’t a new game and its a resurrection of an even older game, but I just had to mention YDKJ because it’s the one game that I played local multiplayer last year that had everyone screaming with laughter and begging for just one more round. My wife and one of her bridesmaids wouldn’t even let me go to bed because they wanted to play more. Buy this game, have some people over, and open some wine. You’re going to be in for a good time. 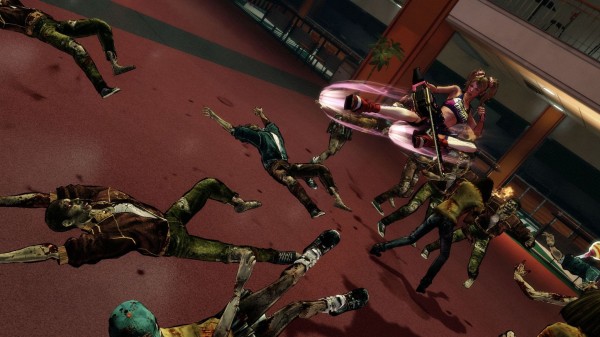 The argument for post-Steinem feminism is strongly bolstered by the presence of a chainsaw and Jeet-kun Do.

Civilization V**** – 4 McAdams/Goslings and 2 (sarcastic) Lohan/Culkins – Again, not a new game. Not even close. But I had to mention it because Firaxis has done something that I think no one else has done – they make an absolutely awesome game (Civilization III) that kept me entertained for years. I saw no reason to move on; this was strategy-game perfection. Then they turned around and created Civilization V. It’s the same brand of one-more-turn crack, but even better. (I clearly don’t know much about crack.) I will be playing this game for years and probably cursing it for lack of sleep.

Burnout Crash! – 3 Lohan/Culkins – I could give this more Lohan/Culkins, but that would require too much energy for a game that sent me into a dark, crushing depression. My favorite gaming memory was from Burnout 2: Point of Impact when we discovered crash mode. (It resulted in co-ed hilarity). I can’t speak highly enough of the crash mode in Burnout 3: Takedown. Criterion didn’t lose a step in crash mode in Burnout: Revenge. Then, with Burnout Paradise, they removed THE BEST PART OF THE GAMES. Later, when I heard that Burnout CRASH! was coming out during the Summer of Arcade, I couldn’t have been happier. And then I played it. Jesus. I had more fun playing with my matchbox cars on the patio when I was a kid. This wasn’t mayhem, this was…WHAT DID YOU DO TO MY CRASH MODE!? <sigh> I’m sorry, I can’t go on. 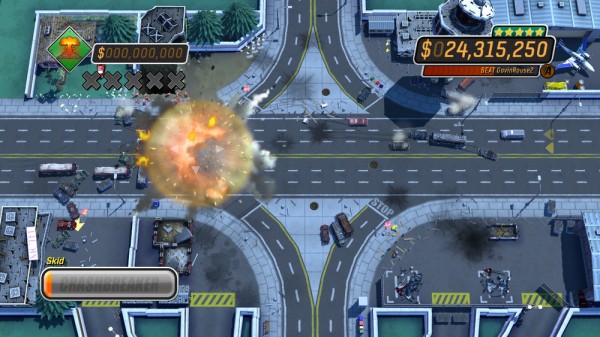 THIS is not Crash Mode, Criterion. I don’t know what it is, but it sucks and it ruined Christmas.