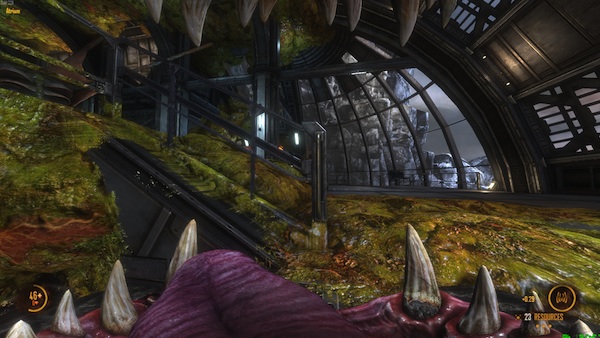 Most people probably won’t remember the original Half-Life mod Natural Selection. Forgivable since it came out in ’02. Don’t let that stop you from checking out Unknown Worlds’ Natural Selection 2. This is a multiplayer FPS/RTS hybrid with a familiar humans vs. aliens aesthetic. For fans of the original, you’ll be right at home with NS2.

Natural Selection 2 is currently a shoe-in for Best First Person Alien Mouth of 2012.

I wasn’t sure how seriously to take Natural Selection 2. At first I thought it was going to be some Sci-Fi B-Movie action game that I’d either laugh at or laugh along with it. Turns out Unknown Worlds is serious about its aliens. Serious enough to build its own game engine for this sequel to a Half-life 1 mod.

The engine is not only solid enough for a frantic team-based marines vs aliens multiplayer shooter, but it has a few surprising tricks up its sleeve. First of all, the commander of each team essentially switches to a RTS above the battlefield camera. The commander can guide the team along issuing commands, dropping helpful items, purchase upgrades, and, on the aliens side, spread infestation through the map.

It took me a while to realize that the infestation is complete dynamic. In other words, the infestation looked so good on-screen that I assumed it was a part of the level design. Instead upon viewing the alien commanders perspective, I realized that he was spreading the infestation throughout the map. It was changing based on the commander’s placement of spores and the marine’s destruction of the spores. I was impressed.

As for the gameplay, NS2 holds its own with other multiplayer shooters. Nothing about the shooting/action stood out as overly positive or negative. The character classes seem useful enough and the weapons pack a punch. The alien classes and character models are the most eye catching aspect of NS2. The variety of having wall climbing aliens, big lumbering tank-like aliens, and flying aliens definitely makes the aliens a very appealing alternative to playing as a standard space marine.

Playing as the space marine at first looks pretty standard. However, it enables the atmosphere and setting of Natural Selection 2 to really take hold. In the end it is the aesthetics that will make or break your experience with the game. As the gameplay offers some nice twists, but not enough to separate itself in the shooter genre. However, if you are looking for to join the fight against some truly disgusting alien species or become them, Natural Selection 2 may have your favorite new flavor of alien guts.