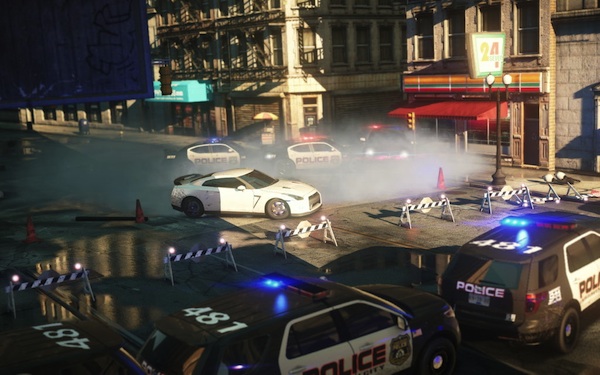 We think Criterion makes fun racing games. This particular one says “Need For Speed” and “Most Wanted”, but all we see is “Burnout Paradise 2: Real Cars”.

Watch Justin do donuts, run from cops, ramp over shit, run into other players, ramp over more shit and do more donuts in this fast and furious Game Curious:

I don’t know what I was nervous about with Need for Speed: Most Wanted, but no matter how much I trust Criterion, I’ve never really felt that great about the NFS franchise. Would Hot Pursuit be a fluke?  Is expecting Burnout Paradise 2 realistic? 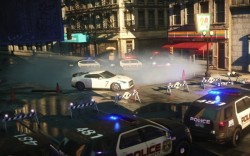 My donuts bring all the cops to the intersection.

It is funny how when the rubber hits the road and then that rubber explodes all of my criticisms get blown out the window. NFS: Most Wanted is nothing short of a blissful first impression. Sure the wrecks aren’t quite as devastating as they would be with fictitious cars, but that is replaced with the thrills I’m getting as I discover new real cars throughout the city. Plus, the wrecks are still pretty damn awesome and I can wreck as spectacularly as possible as often as possible.

I wasn’t too impressed with the tutorial portions and the slow walkthrough of the in-game interface, but through after some trial and error things made sense pretty quickly. Thankfully, this makes jumping online for the sheer madness of NFS: Most Wanted multiplayer quite easy. The structure of the rapid fire multiplayer challenges/races deftly walks the fine line of being organized enough to keep things moving but chaotic enough to keep the fun factor redlining. Somehow Criterion has incorporated griefing into the multiplayer itself in a way that only adds to the excitement without being frustrating.

Offline Need for Speed: Most Wanted can give you a bit of a breather, but the constant bombardment of speed points, autolog challenges, and car upgrades keeps the player addicted in-between major challenges. It is easy to get distracted in the city of Fairhaven if you don’t have a plan, but it’s also thrilling to just drive around and torment the cops while you decide which car to play around with/upgrade next.

This is as varied as a racing game gets, and while it won’t necessarily convert or ease in new drivers, Need for Speed: Most Wanted is wholly satisfying for the speed freaks, drifters, and crash fanatics that Criterion has been training for the last decade.

Need for Speed: Most Wanted is available now for PS3, Xbox 360 and PC.