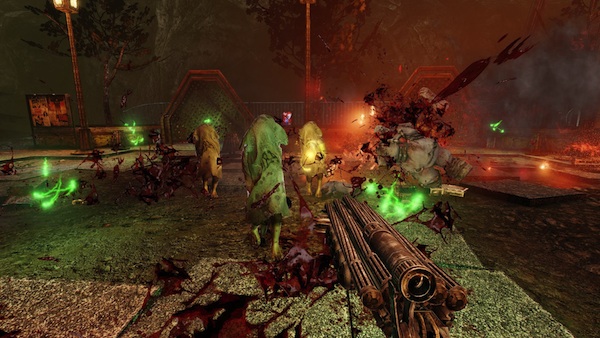 The original Painkiller was the Doom 3 we all wanted. Unfortunately, we couldn’t know that at the time of its release. Yet that didn’t stop me from enjoying its refreshingly old school shooter sensibilities. Wave after wave of demonic and supernatural foes. Giant bosses. Amazing weapon designs. A f******* stake gun. You either love Painkiller or you don’t. It’s simple.

I’ll have the stake.

The problem if you loved Painkiller is that the follow-ups haven’t felt all that satisfying. Painkiller: Hell & Damnation may not be the outright sequel or reimagining some fans may think they want. This is, after all, a selection of levels from the original game and its expansion pack powered by the Unreal 3 engine. However, it’s also been brought over with the care of some of the original game’s team members now at The Farm 51.

So I challenge you to ask yourself if you are ready for some more Painkiller? How about a Painkiller with an improved game engine at a budget price? Your answer most likely in the afterglow of one of these two trailers:

That hit home for some of you, the rest of you, I have what you need. Because if you’ve forgotten how Painkiller really feels, this trailer is ready to impale you:

You are either in or out at this point. My personal answer surprised me as I was ready to write the game off, but I admittedly jumped on the Hellish hype train this week. My shooter queue could use a dosage of Painkiller and there aren’t enough wave-based co-op shooters in the world these days.

Painkiller: Hell & Damnation is available now for PC and on Jan 22nd for PS3, Xbox 360.