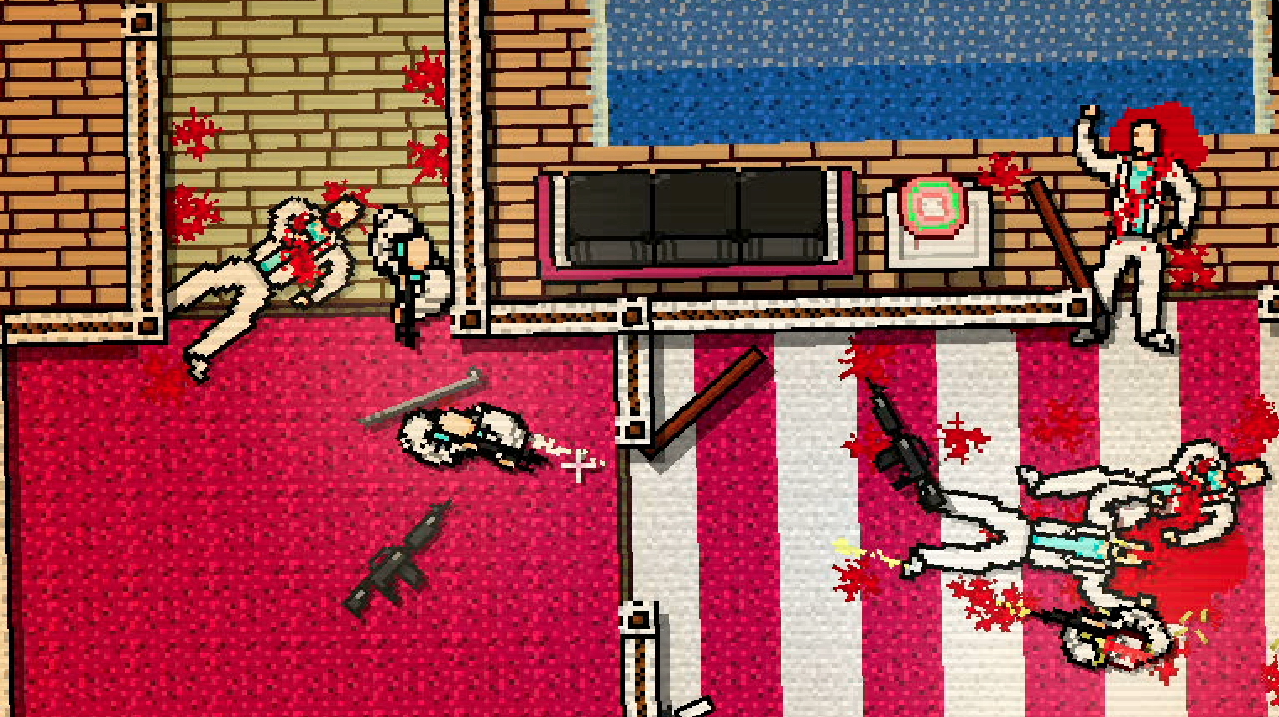 A cold chill is in the air. The smell of blood is everywhere, following the path of destruction I’ve carved to get to this point. My moves have all been calculated, yet I’m nervous. My right hand shakes, but there’s no turning back now. I burst into the room, hurling the knife in my hand into the flesh of the man directly in front of me. As the thud echoes off the walls surrounding us, a hailstorm of bullets rains upon me from off-screen. I gasp in surprise and reappear at the staircase of the 2nd floor. It seems today that all I’ll see is violence. It’s the way things are in Hotline Miami. 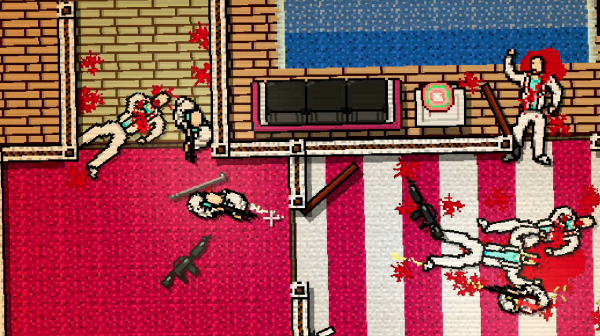 There can only be one insane serial killer in Miami. Except when there are two or more.

The chain of events that drives this murder spree is as intriguing as it is outrageous. This is a city where men wear masks and the words they share with me are cryptic. The only reality I can ascertain is that I will always receive a phone call and it will drive me to more killing. Are my targets bad? I can only imagine so. Am I a hero? I don’t really know, but this is the only choice in front of me. My car takes me to places where my survival is a victory and anything otherwise is temporary failure. So I continue increasing the body count.

The plan is easy enough. Enter a building, clear each floor of all the guards and leave. Sometimes there’s a drop I need to collect, but the buildings are always voiceless when I leave them. This is done using a variety of weapons and tactics. Experimentation is rewarded and failure can lead to enlightenment.  The more efficient the execution, the higher the score. With high scores comes unlocks like new masks with special abilities. These range from faster movement, better defenses and even a dog mask that discourages patrolling canines not to assault you. I guess men with dog heads are a dog’s best friend.

I’ll be explaining this one to my therapist soon enough.

Jobs in Hotline Miami moves at such a pace that my head began to spin as I would constantly decipher a plan of attack only to work on its revision seconds later. The keyboard and mouse controls are easy to grasp, but sometimes the speed in which things happen, mixed with the chaotic nature of my reaction time, would lead to deaths where my final moments consisted of shooting wildly or swinging a pool cue as if my vision had suddenly worsened. Let’s just say guards don’t mess around when it comes to murderous intruders. While my reactions to these deaths was less than respectful, sections are short and the nature of the game is heavily rooted in trial and error. Once a plan works, you feel like a pro. When a plan goes horribly wrong but you win anyway, you feel like a lucky horseshoe decorated in blood-soaked four-leaf clovers.

It could be the fact that I was born in the 80s (let’s pretend it’s not), but there’s something about that decade that just spits in the faces of other years and I think, “That’s cool.” The enemies rushing around in white suits in rooms full of the brightest and most offensive colors almost make me think interior design wasn’t fully invented yet. The background constantly pulses with a rainbow of similar colors that suggests everything happening is either a bad trip or a Crayola-induced nightmare. Note to self: crayons aren’t snacks. The true standout is the soundtrack and it sure stands out. The music is totally infectious, seeping into your brain and powering your every move like diesel gasoline. Pure and energetic audio gold.

Hotline Miami is really an experience that gets under the skin and hangs out for a while. It’s easy to shout about how 80’s music is totally cool, but it’s harder to look someone in the eye and describe what I’ve done to the dozens of enemies that got up in my face. It’s fun, but despicable. Simple, but challenging. Cold as ice, but neon hot. 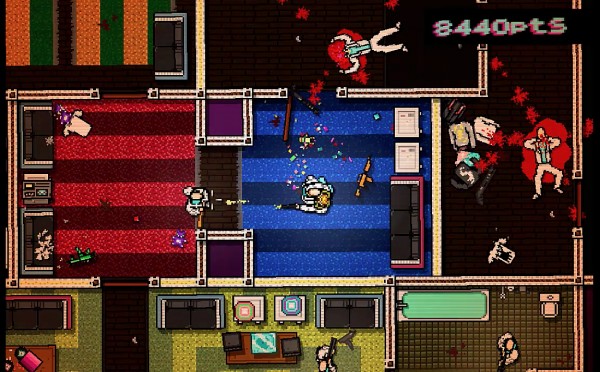 The problem with human shields is that they are prone to having feelings.

As I slip the mask back on my face, I feel the last remnants of doubt escape my mind. I’m at the staircase of the 2nd floor and preparing my final deep breath before I make my move. My movements appear blurry, but feel so fluid. Bodies hit the floor melodically, aided by the percussion of nearby doors being kicked open to create a furious song. I complete my mission and the sweat rolls down my brow as if on cue. Driving away into the neon night, I remember that this is the way things are in Hotline Miami.

For a cool $10, the grit and gore of Hotline Miami can be yours. Plus I’ll throw in a snuggie so you can rock yourself slowly to sleep while mumbling about how you’re not a violent and crazy person. There’s replay value in beating levels more efficiently, unlocks such as the game-altering masks and just the thrill of having this 80’s crafted showpiece in your Steam collection for your next planned dinner party. Act now and act fast, psycho killers! Value score: 5/5