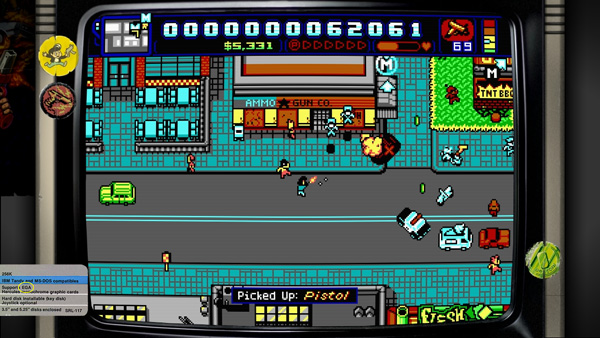 Justin and Josh put away their Pogs and put on their Underoos for this most referential of Game Curious episodes. This video is intended for an mature audience as our commentary is not kid-friendly:

We make no secret about our gaming roots on Horrible Night, so I can’t help but feel a bit biased when game comes along and targets the type of nostalgia that framed not only my development as a gamer, but my interest in the entertainment industry as a whole. Retro City Rampage is a referential force to be reckoned with. The sheer amount of gamgasmic joy I experienced in the opening 30 minutes of RCR still profoundly affects my perspective on the game itself.

This isn’t the first game in the last month where the critical side of my brain has been overwhelmed with the insane giddiness of its neighbor. With that in mind, I contend that anyone presented with a small dosage of Retro City Rampage will immediately know whether or not he/she will enjoy the game. If you happen to like the action/structure of the classic top-down Grand Theft Auto games, that being a simplified open-world full of car jackings, killing sprees, throwaway missions, and plenty of handheld weaponry, you have a leg up on having a blast in Retro City. The real question is how much mileage can you get out of constant references to 80s and 90s pop culture and video games?

The referential humor can even carry the player beyond the limits of the gameplay itself. As I could make an argument for Josh Lee’s preferred method of RCR consumption – watching someone else play it. However, if the references fly by you or the jokes fall flat, it’s going to be a dull rampage for you personally.

I can’t fault the game for that distinction though. Only 4-5 hours in and I feel more than satisfied with Brian Pronvinciano’s admirable creation. I notice new things in the city on every drive, I laugh at the ridiculous combination of references, and still find myself just causing chaos in the city because I can. It’s not the perfect combination for every gamer or even for every retro gamer, but I’m proud to feel at home in Retro City.