There’s a few facts my friends should probably know about me: I play a lot of games, would eat a piece of cheesecake every day if I could, and can’t resist collecting loot. This year has been ripe with games throwing random numbers before my eyes. I’ve hacked, slashed and shot my way through the enemy hordes, eyes searching the ground for brightly colored items like some kind of loot junkie. We’re about ankle deep in the holiday releases at this point, but, this week, I’d like to give a shout out to the games made for digital hoarders in the last couple of months. 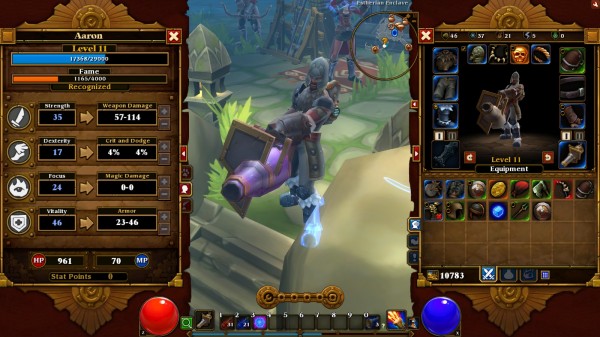 I suppose engineers can build things with cannons maybe.

I’d been waiting all summer for the go-sign that Torchlight 2 was available for my greedy download. Now I never took the time to get to the bottom of the mine in the first game, but I can’t stay I minded that much when there was sweet loot to worry about. I’m excited to explore the world in the sequel, but I’m mostly there to explode all the enemies into piles of gold and new equips! It only makes sense that my dapper engineer use a cannon in which to initiate said exploding, because why not. I’ve only scratched the surface so far, but I’m going to blow the whole thing wide open in the upcoming weeks. You know, because I’m an engineer with a cannon.

Even large cat people hoard things and not just yarn.

I haven’t talked much game about Guild Wars 2 lately and that’s just because I haven’t found the time to sit back and just quest with all the strangers lately. I’m still incredibly fond of it though and it only makes sense that I mention the guild when I talk about loot. Items are everywhere and they need to be hoarded whether for better stats, looking badass or crafting a larger bag to hold more piles of globbidy goo. If a MMO isn’t constantly rewarding you for simply existing, then what’s the point? Socializing like a normal person? No thanks, gimme those shiny armor pants!

If a gun collector and a fashion designer had a baby, that baby would need an intervention from playing too much Borderlands 2. This game is a rainbow of weaponry and that rainbow tastes like explosions instead of fruit candy. With all the greens, purples and oranges flying into my face from every chest, trash can and psychopath’s squishy head, I can’t resist scooping up everything. If there was DLC to have more arms on your character to fire more guns, then I’d want it. 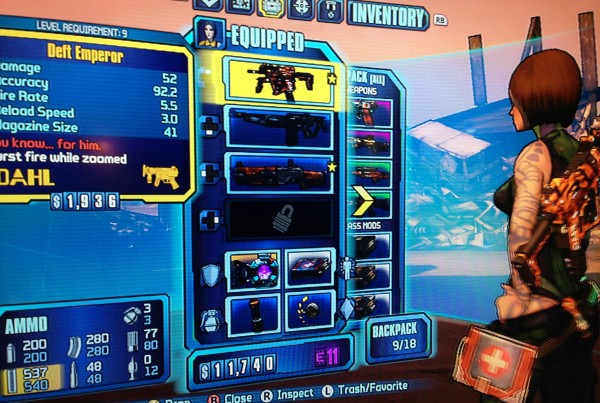 Sure, I’ve got guns… but I need MORE guns.

It’s at this point that I’ll admit that I have a loot problem, but it’s one of the most entertaining conditions a gamer can have. Plus, it’s better than actually hoarding a pile of guns, cannons and heavy armor sets in my bedroom closet.

Cliffy B Leaves Epic Games – Most people have heard Cliff Bleszinski’s name at some point or another, especially in relation to the blockbuster series Gears of War, but it’s kind of sad to hear he’s probably going on some soul-searching mountain climb instead of making games for a while. You do good work, brother.

Yesterday, I Saw ‘Looper’ Today – Joseph Gordon-Levitt and Bruce Willis put on a good show in the recent science-fiction time-traveling movie ‘Looper’ and I just wanted to take a moment to request you all go back to last week and watch it. That’d be a lot cooler than watching it today. Just watch it though.