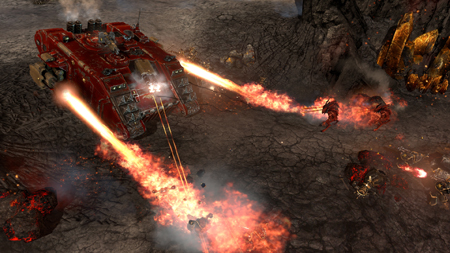 I’ve been eyeballing Dawnguard, the first official DLC for Skyrim for a while now, but wasn’t ready to pull the trigger since I hadn’t played the game much lately and really couldn’t remember where I’d left off. That’s intimidating enough for any game, but with Skyrim it’s exhausting just thinking about trying to tracing my own steps. Despite this, I had an Elder Scrolls V craving and new a bit of vampire slaying might ease me into things. Things started out well enough and I even thought that I could turn the play session into a Reflex Review but as tends to happen, things got weird. 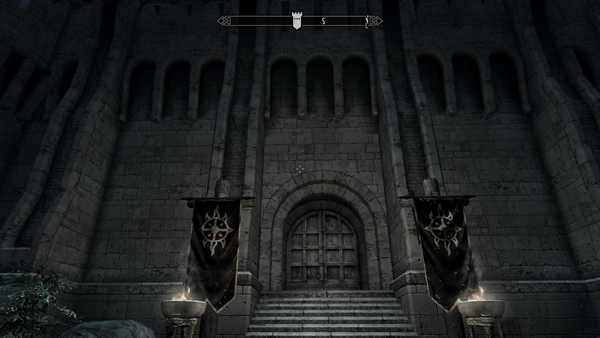 Back to Skyrim School

As soon as I entered my previous save, I had to get my bearings and that meant traveling back to my home in Whiterun. As I fast traveled back, I was immediately aware that the vampires impact on the local population was less than discreet. I heard shouting and saw the guards fighting and eventually killing one of the blood sucking freaks. Now, this wasn’t my first time seeing a vampire in Skyrim, but they’d never attacked a major city before. The situation looked pretty bleak, so I hurried along to Dawnguard and took up arms against the undead invaders. Well, that’s what I would have said if I hadn’t noticed how disorganized my home in Whiterun was.

I vaguely remember putting objects into different chests based on their use, but I was appalled at how sloppy I’d been. Armor and weapons in the same chest? Potion ingredients and food items mixed together in a variety of different cupboards? How was I ever going to find anything? I didn’t realize how effective my change in ADHD medication dosing was until I saw how the past version of me did things. It was embarrassing but also a problem that was easily remedied and before long things were looking good. So I put on my favorite suit of dwarven armor and set out for Dawnguard.

The Journey Kind of Begins

I’ve been away for too long.

When I got there, the leader of the Dawnguard was stewing a bit because of the whole vampire invasion thing. He was tough, but fair, and didn’t fully buy into the hype that was the Dovahkiin until I proved myself a bit. Despite killing like 20 dragons and hundreds of other fantasy creatures, I decided that he was probably stressed so I accepted the quest he gave me and hurried along to finish it quickly, thus assuring that the vampires didn’t get the upper-hand. Or, that’s what I would have said if I hadn’t just read a review for the latest Underworld movie.

I really enjoyed the first two Underworld movies and since I hadn’t seen the third (which was a period piece) I thought that maybe reenacting Underworld: Rise of the Lycans, the Dawnguard DLC might make it easier to jump into the fourth movie of the series. To do that, I would need to become a werewolf and to become a werewolf I’d have to join up with the Companions.

Well, the Companions don’t just turn anybody into a werewolf; you have to earn that right by completing tasks for them. So I did a couple quests and eventually earned their trust, thus unlocking the werewolf power that I thought would be quite useful when battling vampires. Now, imbued with the powers of the super beast, I was well on my way to stomping a mudhole in the butts of those crimson-fanged douche bags. I really was on my way to the quest, but a dragon attacked and well, I needed to test my werewolf strength somehow.

Dragons are still the Top of the Food Chain

Stupid idea. While I did have werewolf blood pumping through me, it was noob werewolf blood and that dragon really kicked the crap out of me. I got thrashed before I could even take a tiny sliver off his health bar and worst yet, it was right in front of some normal wolves. I needed to buff my werewolf up if I expected to make any sort of impression on the vampires, so I went to work running around and eating corpses to earn perks for the Beast Form skill tree. 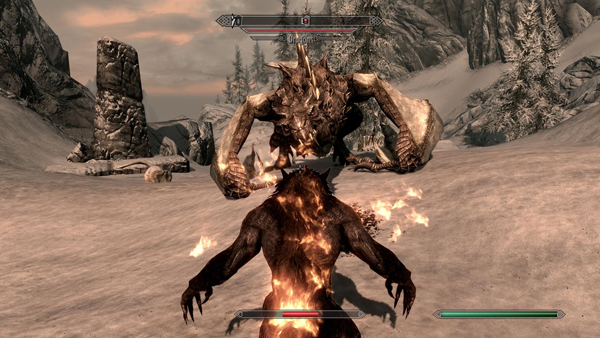 I may have bit off more than I can chew.

Once I was satisfied with my increased wolf strength, I started back towards the first of the Dawnguard quests, but upon looking at my quest log I remembered that there were a bunch of pirates causing problems for the folks at Winterhold. I hate pirates and I figured it’d give them quite the fright if I showed up to their little loot party with my new form. Unfortunately, you can only use the wolf form once a day so I was going to have to take on these pirates in a less direct way so I traveled back to Whiterun and threw on my Dark Brotherhood sneak gear. If you hadn’t guessed it by now, this made me remember the Dark Brotherhood quests I was working on before I took a Skyrim break. Seeing as I was going to need to sneak up on the pirates, I figured a couple missions wouldn’t hurt. Plus, I needed some cash as I’d apparently spent all my money on steel ingots.

I completed a couple of the contracts and was pretty pumped. With a wallet full of gold coins and having leveled up a few times, I figured now was as good a time as ever to fully immerse myself in the Dawnguard campaign. Then, another freaking dragon attacked me. I spent the better part of twenty minutes hiding in the woods and pecking at it with my weak as hell frost spells. Apparently, the dragons start to get even tougher as things progress.

After that last dragon battle, I was pretty tired and figured I’d take a more focused shot at the Dawnguard campaign the following day. At this point I’m pretty satisfied with what I think Dawnguard will entail/include. I shot the crossbow once, but I’m not much of an archer so that’s not really a weapon I’ll use that often. Other than that I heard there was horse combat and trolls with armor, which both sound pretty neat, but at this rate I’m not sure how long it will take me to actually see that stuff. Oh, look, some flowers.