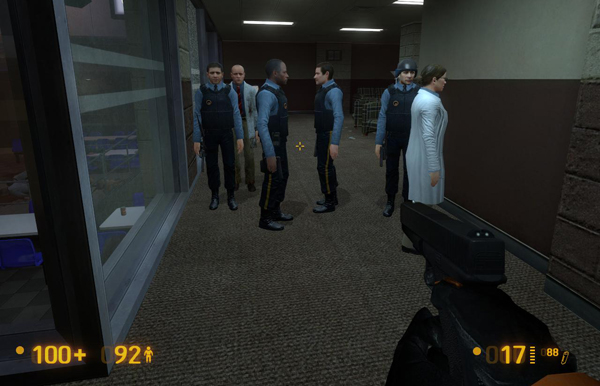 The original Half-Life held a very special place in my gaming heart, a place that I’d forgotten about after a decade full of brandishing weapons and then using aforementioned weapons from a first person perspective. In addition to that, I wasn’t a huge fan of the sequel (though I did like the improvements in terms of mechanics) and could never count myself amongst the large group of people praying to their preferred deity in hopes of continuing the exploits of Gordon Freeman. Then, I heard about Black Mesa and decided to take a trip back in time to play a shinier version of a game that was ahead of its time, but now boasted improvements applied in the present day using bits and pieces from a game released in 2004. The time space continuum has just been thrown off track, but trust me when I say it was well worth it.

I wasn’t sure what to expect from Black Mesa but once that iconic opening sequence began, I was hooked. I remember all to well my confusion the very first time I sat idly by while I was transported through Black Mesa’s underground laboratory, my juvenile brain capacity not quite able (or ready) to grasp the concept of narrative build-up. This time around was quite different and I can honestly admit that I got shivers as I watched scientists mill about while a soothing female voice gave instructions and updates through the intercom. The team behind this total conversion mod did not take any sort of shortcuts when it came to the presentation and I was absolutely blown away by the attention to detail that the introductory scene was given. 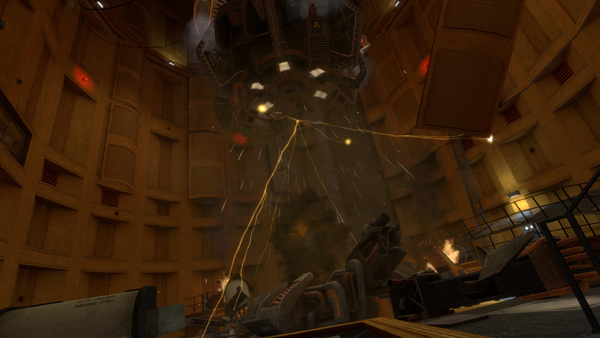 I had a strange feeling that was going to happen.

A well done title sequence isn’t worth squat, however, if the gameplay isn’t polished or engaging. Despite nostalgia rubbing my inner thigh with its warm and fuzzy fingers, I pressed on with the judgmental eyes of a father meeting his daughter’s teenage boyfriend for the first time. After the doo-doo hit the fan during the reactor sequence, I made my way through the chaos that ensued, the screams of my comrades echoing as everyone tried to make sense of what had gone wrong. I hadn’t quite found the crowbar yet, but did come across a flare as my first encounter to one of the additions to the original game. I wasn’t sure what its purpose was seeing as I had a flashlight (that didn’t run out of battery by the way). Then, the invisible arm carrying the flare out in front of me got too close to a headcrab infested zombie and wouldn’t you know, it burst into flames. It didn’t die immediately, instead clawing about in pain as the flames consumed its corrupted flesh. It eventually died and I could only think of two words to describe the situation; “F***ing awesome!”.

Interacting with scientists and security guards can be amusing sometimes as, similarly to the original, many share the same whiny voice. Not a point to nitpick as much as a delightful little nugget that sometimes breaks up the insanity that is occurring around you. It’s also nice to be able to lead multiple colleagues around with you, though the AI still can’t quite figure out how to climb ladders or do anything outside of walking up stairs, spouting one-liners and sometimes shooting the holy hell out of anything that moves. 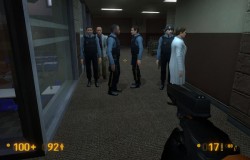 Black Mesa introduces plenty of mechanics that weren’t present in the original, yet none of them make the experience too different or gimmicky as to overshadow what I assume the purpose was. Everything looks and feels tightened or enhanced. I can’t quite differentiate every little alteration since it has been so long since I played either Half-Life game, but that may also speak to how well the alterations were integrated. It’s almost like having peanut butter and jelly for the first time after decades of adult food, only the sandwich you remembered so fondly from your youth now has 5 layers, is wrapped in bacon and has been deep-fried in beer batter.

I continued making my way through the game, half playing, half admiring, though ultimately getting back in the zone once the inhabitants of Xen began to teleport in all over the place. I’d forgotten about this, so it was a definite jump scare the first time a bolt of green suddenly flew through the air towards me. I quickly emptied a couple of clips into a wall before finally sinking some lead into alien flesh. Once the military showed up, things got even more intense as I dodged turrets, hurdled over trip mines and did my best to survive what is still one of the greatest three-way battles in games to date.

The puzzles still feel like they actually belong there, utilizing equipment that would be commonly found in and around a similar facility. This was always one of the key points that made Half-Life stand out as solving a puzzle never quite felt like it did in other games. The added physics included with the Source engine make these never too challenging action-breaks feel even smoother.

Graphically, the game can’t be fairly compared to the heavy hitters of this generation but it still looks pretty nice. In looking back to the advances made since the original was released in 1998, Black Mesa equates to a high-priced Hollywood face-lift. I’ve always been a sucker for remakes, but there’s just something about reliving an experience without having to deal with dated production value. 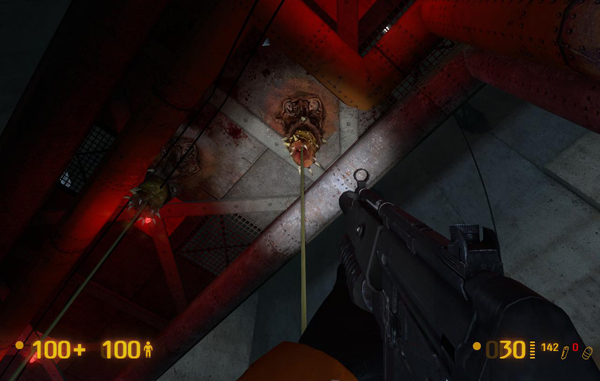 That horrible creature looks so much more attractive now!

Playing Black Mesa Source is almost like walking through a refurbished museum of gaming history. Whether it’s the physics-based puzzles that actually make sense, the story line that involves more than a simple objective, or the atmosphere that amounts to a living breathing environment, this is definitely a game to try out regardless of whether you’re a long time fan of the game or a noobie wondering what all the fuss is about. I’m personally excited to spend more time with it and hope the initial excitement never wears off.