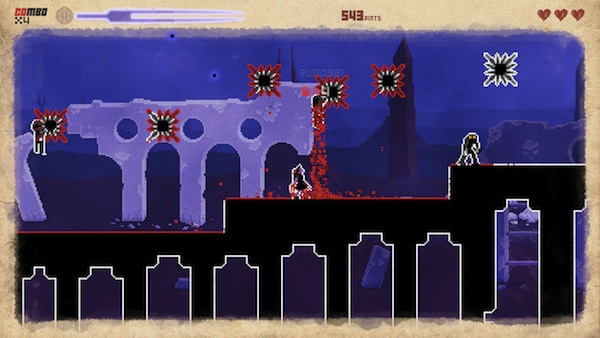 Listen, we know what you’re thinking. “Oh, another indie platformer.”

But Spooky Squid Games’ They Bleed Pixels oozes too much charm (and blood) to not stop and take a gander. It has tight platforming, surprisingly deep fisticuffs, lovely Lovecraftian homagery and one smooth-ass chiptune soundtrack.

But don’t take our word for it. Watch this episode of Game Curious to pass judgement for yourself. This video is intended for an mature audience as our commentary is not kid-friendly:

I’m a sucker for a bloody game and especially one with retro video game graphics, at least to the point where that gets me through the door of trying it out. However, I’ve been duped into playing games with plenty of style and little substance before so I kept my expectations pretty even for They Bleed Pixels. Those expectations were immediately exceeded in a glorious gory explosion during my first successful air combo that sent my tentacle-faced enemy into a perfectly placed spike. They Bleed Pixels is deceptively deep. I usually expect a good indie game to feature one or two well-done gameplay features, and TBP has me thinking that I need to raise my bar. They Bleed Pixels features addictive and challenging platforming, satisfying brawling, a brilliant and dynamic checkpoint system, a fantastic chiptunes soundtrack, and beautiful retro graphics that fit well alongside of its nightmarish premise.

I was floored by how much fun I had while playing TBP. I lost track of my level progression several different times because I was too engrossed trying to create the most vicious fighting combo that the environment would allow me to execute. However, every time I snapped out of my attack mindset I was greeted with the type of quality 2D platforming that addicted me to video games in the first place.

Don’t pass up They Bleed Pixels as it belongs right alongside the greatest games in this recent indie video game revolution.