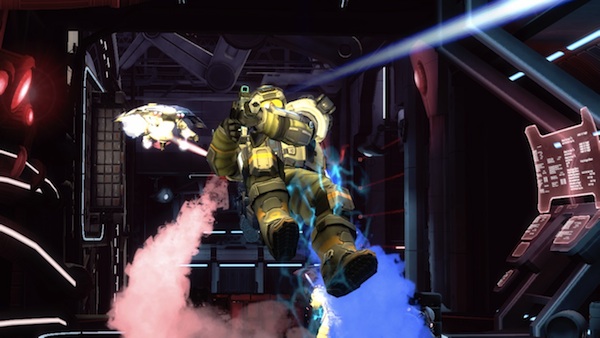 What made the dudes at 5th Cell decide to take a break from Drawing and Scribbling to create a futuristic third person shooter? You won’t find that answer in this video!

I wasn’t sure if Hybrid would be able to rise above just being a tech demo. When 5th Cell announced they were creating a new third-person shooter, but trying a new control scheme I had two thoughts run through my mind. First, if anyone can solve it 5th Cell is coming from about as far away from shooters as possible so it is sure to have some new ideas. Second, are controls really a problem in third-person shooters?

I totally meant to go this way.

The result should have been unplayable. It should have been broken or at the very least felt outdated. I have to hand it to the developers though, Hybrid controls brilliantly. Using the face buttons to navigate in-between cover points, and having your movement restricted once you are in cover instantly adds a much more tactical feel to navigating the battlefield.

There are definitely some adjustments that need to be made by a first time player, but the learning curve is not steep. I was also surprised at the pacing of Hybrid as this tactical approach should by all reasoning make the action much more deliberate. However, Hybrid keeps up a frantic pace right alongside the other online multiplayer shooters.

After that learning curve passes and the player gets into a groove with moving his/her soldier around the map, Hybrid offers up something else unexpected. Hybrid ends up feeling like every other competent multiplayer shooter on the market. That’s both a detraction and huge compliment to the design team for being able to make the player comfortable while playing Hybrid. I just wonder if they pushed it too far, maybe being even more different could have been better in this case.

Aside from the fact that jet packing from cover point to cover point just feels cool, Hybrid does have a few other novel ideas up its sleeve. I prefer small team combat so Hybrid’s 3-on-3 battles hit the sweet spot for me. The addition of utilizing droids in battle that unlock based on your kill streaks adds another layer of strategy to the mix. At the same time, I really enjoy feeling like a part of a global conflict and having each of my matches feel like it is progressing my player as well as my team’s war effort. Progression “carrots” are well designed and executed as it borrows well from Hybrid’s peers.

There’s plenty to like about Hybrid especially if you have a couple of multiplayer buddies that can cooperate and strategize alongside of you. Hybrid delivers a new flavor of third-person shooter for almost a perfect price. Just don’t expect a revolution.

Hybrid was released on Aug 8, 2012 and is available now on Xbox Live Arcade from 5th Cell Media.