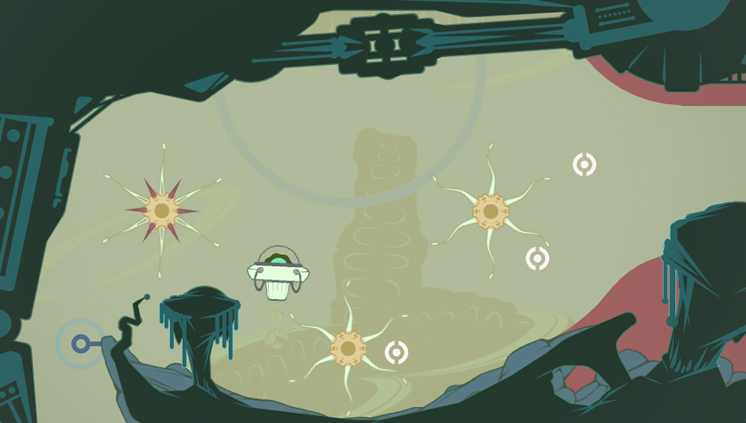 If there was one thing seriously disappointing about jumping on the bed in my youth, it was the fact that it didn’t create awesome music. Enter Sound Shapes, a musical platformer from Queasy Games, to rectify the wrongs of yesteryear. Sound Shapes is nothing less than infectious, painting the picture of one grand adventure through lands heavily inspired by the music you help create as you play. The kicker is that the journey is over rather quickly and the hooks that it offers afterwards depend heavily on how much creativity and commitment you wish to have. Otherwise, Sound Shapes is a fun and unforgettable bit of bouncing delight while it lasts. 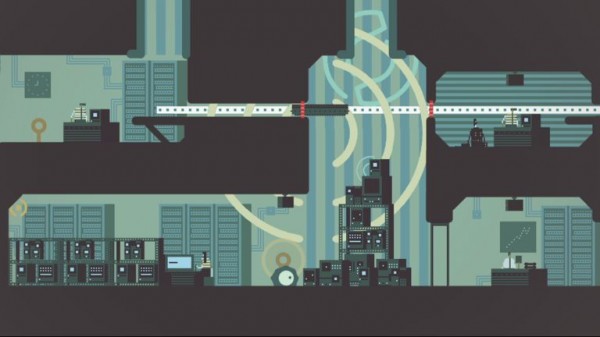 Controlling a sentient ball (or a living record, I don’t really know), the goal of Sound Shapes is to get from point A to point B, dodging all of the red-colored hazards and collecting all of the notes inbetween. You basically jump, roll and stick to surfaces until the level is over, occasionally operating the odd bit of vehicular machinery if available. In that respect, Sound Shapes isn’t about harsh failure that other recent platformers have embraced. It’s a very chill game and is more about speed runs and maximizing the notes obtained. After a day full of stress and work, something like this can definitely put the mind at ease as you hop to the music.

Soundtrack of your life

The way the notes work is that different components of the background music activate when notes are collected and will persist across several of a level’s screens before fading away. This allows for the music to evolve or devolve as the creator desires, creating epic rises and falls that usually relate to the platforming challenges you’re currently facing. Not only do the notes create sound, but the creatures and plantlife are in on the jam as well. A roaming elastic creature might “boop” and then shout when you bounce off of its head. The flowers might chime in the breeze as you roll by. I can’t help but smile remembering some of the instances in Sound Shapes where the music being made consisted of a variety of objects that just felt natural. Not to spoil anything as you can play the game in the order of your choosing, but the levels containing music from Beck were spectacular and I was glad I saved them for last. 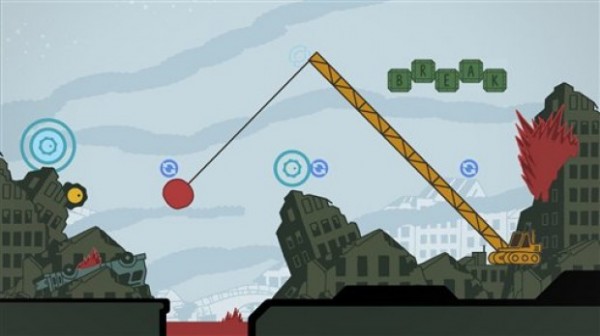 Beck singing about cities while I jump around in a city is super special.

I can gush about my experience through Sound Shapes for ages, but the main game is just disappointingly short. Unless you really love time trials or want to treat the game like a soundtrack you have to play, you’re finished. There are reasons to stick with Sound Shapes, but it depends on your love of user generated levels or a couple of mini-games. After playing the main levels, two modes called Beat School and Death Mode are unlocked. Beat School is actually kind of interesting, tasking you to use the in-game sequencer and a pre-defined beat to recreate that sound by placing a limited number of notes on screen. There’s no fail state or leaderboards here, but yet I found myself loving the idea of solving audio puzzles for making classy beats. There aren’t many of these, but I totally enjoyed them.

I really want to state my satisfaction for Beat School, because I gave up on Death Mode. The idea isn’t bad in theory, since it pretty much tries to turn Sound Shapes into yet another punishing platformer. The problem is it’s just not fun at all. Regulated to one screen, the goal is about collecting a set number of notes one at a time and from randomized locations within a time limit. It’s the epitome of throwing Sound Shapes and masochism into a blender, taking a disapproving whiff of it and then asking me to drink the resulting sludge. If that doesn’t paint a vivid enough picture, I strongly say to give Death Mode a pass.

If the problem with Sound Shapes is a shortage of content, it would appear that letting the community build their own levels would solve it. However, this just brings mixed results. Whereas the included levels have intricately built music and mostly interesting platforming, the community option is more akin to digging through the sand and hoping there’s a diamond in it. The potential is there though, but it’s just not as streamlined as the main game and is at the mercy of whatever the community feels is good. At the time of me actively playing it, the top levels were imitations of the Mario theme and other theme songs that ranged from alright to poor. However, I also played a Twitter friend’s level, which gave me a little more hope that it would be worth it to revisit Sound Shapes down the line for original and better levels. 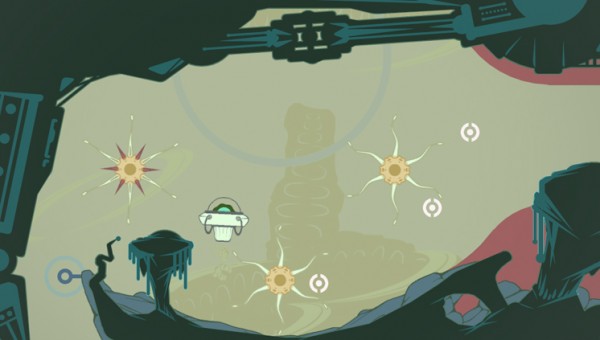 This is what I see in my dreams after too much candy.

Sound Shapes falls into the category of a smaller game worth checking out. It’s fun while it lasts, I don’t feel ripped off and it provided me with wonderful memories. The frustration I felt from my time with Death Mode doesn’t spoil the rest of the experience simply because that part isn’t even necessary for anything but trophies. The community levels may not be as compelling as the main ones, but I can only hope that enough people get the hang of what Sound Shapes is truly about and master the craft of level design and music composition. At least when I jump on the bed now, I can hear Beck singing about it.

By putting down $15, you can have Sound Shapes on both the PlayStation 3 and the Vita. That’s a pretty good deal if you ask me, but your total enjoyment of it hinges on the desire to play around with level creation when it’s over. I really enjoyed my time with it, but I already feel as though I’ve moved on for now. If Sound Shapes ever finds itself on sale, anyone and everyone who has an appreciation for what music can do for a video game should snatch it up. Value score: 4/5