Death gets around. He’s not shy about making a cameo, cracking a joke, or just doing his duty. The concept of Death as a character has him surrounded by heavy doses of mystique and power. His job is simple but designing a video game around him is no small task as evidenced by the fact that its taken until 2012 for Death to get the leading role in a game.

While my bar for what makes a great version of Death is set pretty high, I wanted to look back to see how video games finally did right by my favorite angel. 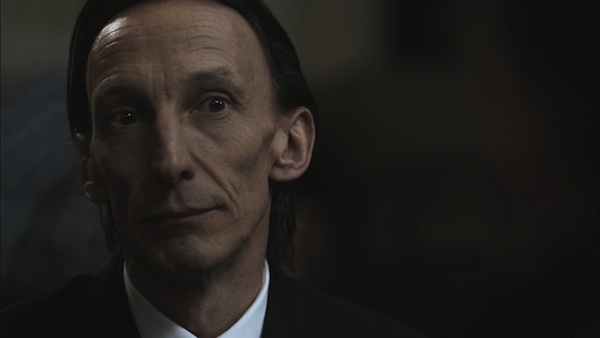 Give this one a game while we are at it.

What he was hired to do

Death fits right in as a natural antagonist. Unfortunately, the nature of his job mostly has him working for a larger evil force rather than pulling the strings himself. I recently ran across him and his horsemen brethren in The Binding of Isaac as one of the many bosses of that randomized game. While I enjoyed the fight and their inclusion in the game, putting Death alongside the other horsemen tends to weaken the character on its own.

My first memorable video game encounter with Death came in the original Castlevania. This was also the most honorable appearance of the Grim Reaper as he is the final boss before you encounter Dracula. His relationship with Dracula is ultimately the problem with his appearances in this franchise. Death can technically be viewed as the right hand of Dracula, let’s face it, he’s just the Count’s bitch. Even if this first encounter is fairly difficult by classic gaming standards, he is ultimately overshadowed by Dracula. To date, Death has more appearances in the series than Belmont family members. In his subsequent appearances though, Death has become more of a goon than a real threat. Taking orders never looks good on you, Death, no matter how may scythes you have. 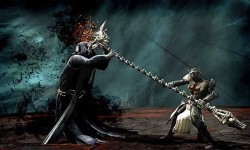 Maybe a little too cocky.

The most intimidating encounter with Death though, goes to Dante’s Inferno. Before Dante can journey into Hell, Dante has to die and guess who is the gatekeeper? This could also be my favorite rendition of the classic Grim Reaper in that he is intimidating, his scythe is devastating, and he’s a bit cocky. Of course, his attitude is ultimately his downfall as even though he puts up a tremendous fight, Death not only succumbs to Dante, but Dante kills him with his own scythe. Not Death’s greatest moment, but it was nice to see the reaper looking fierce while it lasted.

Then again, maybe fighting death is fruitless. Maybe we were all meant to accept Death as a part of life and just hang out with the dude. I have to say while Bill and Ted may have drawn into question Death’s gaming skills, Death can handle the rock. He fits right in alongside NBA Jam Tournament Edition’s ridiculous unlockable character roster. Off the court, the Grim Ripper will always be my choice for best axe man in Guitar Hero. After all that game is at its best when you are shredding as much metal as possible. 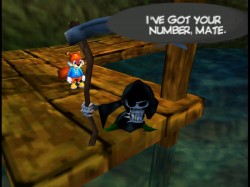 We’re regressing a bit here. But thanks for the laughs.

Maybe I’ve been taking Death too seriously. Maybe he has more of a sense of a humor about himself than I realize. Maybe a sense of humor is actually required to do his job well. After all, Gregg the Grim Reaper makes the best of his situation in Conker’s Bad Fur Day. I can’t imagine from working as Death in a universe where protagonists get an endless supply of lives. Gregg still shows up though even if he’s only memorable for being a joke.

Gregg should have taken a cue from Grim in the Maximo series. Grim was also struck with the unfortunate lack of intimidating vocal prowess. Grim though, made up for it with shrewdness and struck a business deal that not only ensured his job security, but allowed Maximo the chance to save his kingdom and his lady. It turns out Death can do his job without being a dick. Nice work, Grim.

Can Death be a star?

Great personality and great intentions still weren’t enough for Death to become worthy enough for a chance at being a video game hero. Even Death’s son, Death Jr got his shot before the one true reaper. Death Jr even got a hardcore marketing campaign. DJ was supposed to be a platform seller. He was supposed to be the killer app for the PSP and positioned to change mobile gaming. Unfortunately, Death Jr’s failure probably ended up costing the family.

Prior to this year, the closest we have come to having Death truly be the star and hero of a game before 2012 is Grim Fandango. As amazing as this classic adventure game is and as great of a character as Manny Calavera is, Death as a character is replaced by a Department of Death full of grim reaper travel agents. Brilliant premise, but Death still gets the short end of the stick.

It seemed as though Death was doomed to being a one-dimensional lackey or at best a humorous companion.

Darksiders 2 changed all of this thanks to its deep universe centered around the tested premise of the Four Horsemen of the Apocalypse. After War set the tone in the first game, the stage was set for Death to finally get his shot in the sequel. Death in Darksiders 2 has all of the powerful qualities that make him an effective reaper, but the backstory with the horsemen gives him the important distinction of judgment not being a part of his job. Death is neutral. That’s what we’ve been missing.

Well, Death is neutral until you screw over one of his brothers which begets the truly heroic hook. In his adventure for avenging his brother, players are given a reason to root for Death’s success and a reason to guide him in his adventure. Death also isn’t pitted against mortals so his supernatural power is still in tact. He is actually strengthened as a character due to the effective use of his association with the horsemen. As a bonus, Death also manages to have a fittingly dry and witty personality brought to life by the voice of Michael Wincott.

This truly is the greatest Death in video games. Don’t disappoint him again.