My first introduction to Might & Magic: Clash of Heroes was on the Xbox Live Marketplace in April 2011. I downloaded the demo, gave it a couple of hours of attention, and I never pulled the trigger on the purchase. This puzzle RPG by Capybara Games looked good, but I didn’t know if I should put down the money for the purchase. When the Steam Summer Sale came around this summer I found Clash of Heroes for roughly 75% off on day one. It was a steal, and my only regret is that I didn’t purchase this fantastic game last year. 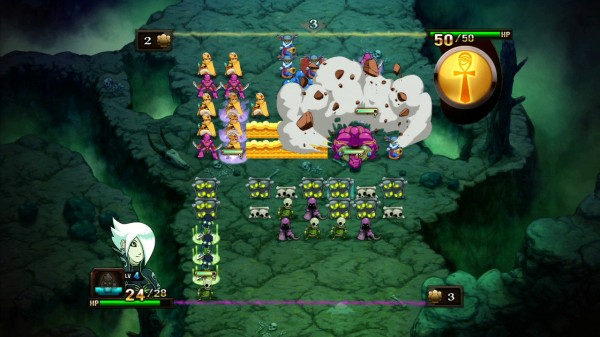 Battles feature turn-based puzzle movements, but then thrill with a variety of attacks.

We’ve seen many turn-based puzzles before. There’s not a lot of groundbreaking development there, but where Clash of Heroes shines is the inventive ways your hero’s powers and unit’s powers are used as you combine like-units into columns of 3 or more. Instead of immediately attacking your foe or his army, your units require a charge time to build strength and attacking. This requires a little more planning versus blindly creating attack units. When rows of 3 or more matching units are placed together they can form walls to shield you from enemy attacks.

The charge time also gives you a chance to get creative with your attacks. Charging multiple units of the same color and matching charge times will create a link to make their attacks more powerful. Building matching attack formations on top of each other creates a fusion attack to double that unit’s power. This can even be done on elites and champions. Elite and champion units have special abilities to release while charging which add variety to the battlefield as well. 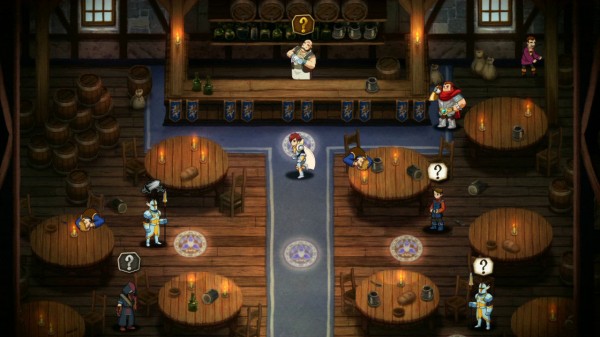 When not in battle, naturally I’m investigating a tavern.

Tell Me a Story

I love using puzzles to solve life’s mysteries, or is it I love puzzles to tell a story? No matter. I enjoyed the story told throughout the game. The story takes place roughly 40 years after the events of Heroes of Might and Magic V, but if you’re like me and sort of clueless on the lore of Might & Magic you won’t really feel lost. This game holds well on its own, and it could lost the Might & Magic and still entertain you.

You take turns playing as the children of the leaders of three different kingdoms. When these leaders meet, the camp is attacked by demons and each child is separated throughout the world. The story takes you on a journey to foil the demon’s plans and save the kingdoms. There are five chapters you play through, and each chapter focuses on one of the young heroes and the kingdom they’re in. The story carries you from puzzle to puzzle, and the humor keeps the story from dragging along too.

Clash of Heroes was originally launched in 2009 for the Nintendo DS, but for platforms with HD screens Capybara adopted a hand-drawn art style which elevates the experience. The artistic direction is very easy on the eyes. It could be misleading to look at the art style and think the game is directed more toward children than adults, but the game can be appreciated by all ages. My son is naturally drawn to its graphics, and he enjoys the mechanics of the game too. 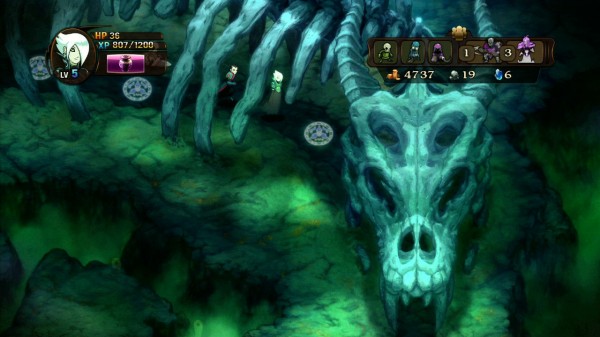 Some art just jumps out at you in HD.

I wish I had a time machine to go back to April 2011 me and tell him to download the Xbox LIVE version. Not because I would prefer that version, but I’m saddened to know that 15 months went by before I decided to finally give it a try. It’s fun to sit in front of the computer with my son and play together. We talk strategy and he takes control at times to try an idea he has. It’s very entertaining to watch. The RPG elements of the game are watered-down versions, but the puzzle aspect of the game is its strong suit and the most entertaining for him. Knowing the game is on Nintendo DS and my son loves it. I think I have a purchase for his upcoming birthday to make, and if I can figure out the whole time machine thing I may by 2011 me that April birthday present of Clash of Heroes too.

I bought the game on Steam sale for 75% off its regular price of $14.99. Needless to say I feel like I got it for a steal, and I really couldn’t be happier with the results. I’ve put in more than 20 hours in the campaign and some limited time in the multiplayer. Even without the multiplayer the game would have been fantastic. Value Score: 5 out of 5.

Recoil Review – Games evolve with updates over time and so do opinions. A postmortem review after the dust has settled on a game’s initial launch to see how the game holds up today.