To this day, I don’t really know what Blue Stinger was actually about. I was an angsty teenager when I last played it  so my emotional pursuit of the opposite sex and a tendency to fall asleep listening to Linkin Park more than muffled the intricate details of my semi-adulthood. I can piece together bits and pieces of the plot; remote island, bio-tech company, apocalyptic meteor impact. Outside of that, it was a third person, dare I say “survival horror” title that I assumed was going to be like Resident Evil but found out it was more like the more colorful, zany, C-grade cousin of that beloved franchise. Sometimes a title lacks both quantity and quality yet can still caress the happiness sector of that part of your brain responsible for nostalgia. That is what Blue Stinger did (does) for me.

I’ve got a favorite bar back at home in Indianapolis, the type I go to when I want to have a drink by myself or when hanging out with my closest friends. It is not the type of bar, however, that I take more affluent guests unless, of course, I’m insanely drunk and out of control. Blue Stinger sits with me in much the same way. Even back in the Dreamcast era, many of the people I showed the game to laughed at the absolutely hilarious (and somehow over-informative) introduction of the plot and one of its heroes, a Mr. Eliot G. Ballade. Unlike the protagonists of Resident Evil who willingly charged headlong into a suspicious location, Eliot was minding his own business while fishing with his buddy Tim. Suddenly a meteor hits and an impenetrable dome encapsulates the island and half of the fishing boat. Unfortunately, Tim gets caught between layers and is apparently frozen in place. Then, a fairy appears and what look like exploding ducks destroy the boat, causing Eliot to jump overboard and swim ashore. WTF is right.

Now, I’m not about to claim that Blue Stinger is the only game ever created that has a somewhat silly premise, but it goes without saying that being disappointed when it doesn’t unravel into a Dickens-esque tale of wonderment probably means you take games too seriously. The fun is in the presentation and the quagmire of shenanigans our hero gets into throughout the course of the game. I mean, the name of the island the game is set on is Dinosaur Island. I’m pretty sure that’s also the title of a Sci-fi original, which is what Blue Stinger would be if it ever made a leap to the silver screen.

The gameplay of Blue Stinger was actually pretty enjoyable for its time and one of the earlier games that I got into a grind fest with. Your whole goal, or at least the simplified version of things, is to kill the ugly creatures that the residents turned into, solve a puzzle here and there, and ultimately save the day. There’s a variety of different weapons to tool around with, including power swords, rocket launchers and t-shirts that imbued your in-game partner (more about that later) with a variety of martial arts skills as well as other useful items. I love diversity and I love when a game doesn’t hinder itself by only offering classier or more mature varieties of weaponry. Were all of them effective? Of course not, but that’s why one is given options. 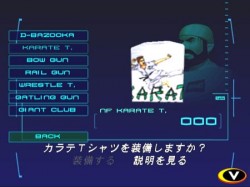 Unlike Affliction / Tapout gear, these shirts actually make you tougher.

Resident Evil obviously rubbed off on Blue Stinger quite a bit because in addition to the whole evil biological engineering corporation, it had its very own version of Barry Burton in the form of Dogs Bowers. Dogs Bowers was probably the best thing about Blue Stinger because he didn’t really seem to take things all that seriously and relied on 80’s action movie masculinity to get him through some tough jams. You could switch between Eliot (finesse) and Dogs (pure testosterone) in the pause menu which was a surprising treat for me while playing. I tended to play as Eliot until I got in a pinch, then let Dogs clean up. The only confusing part about Dogs was whether Eliot could magically transform into him or if he was a Fight Club like persona of our hero.

The enemies, which in the beginning amount to Disney’s version of necromorphs, meander about with huge pockets full of gold coins not unlike the monsters from almost every RPG ever made. What they are doing with this much cash is just one of the many mysteries of the game, but one that benefits you directly as the world of Blue Stinger is filled with item-producing vending machines! Because most of Dinosaur Island’s merchants are now multi-limbed jerks, you’re forced to rely on the diverse selection offered by these marvels of the modern world. The highlight of these machines and the item I grinded “7th grade winter formal” style the most for were microwave TV dinners that extended your life bar. This is contrary to what we now know today, but I have to admit I thought about purchasing stock in Stovers during an econ assignment based entirely on my experiences. 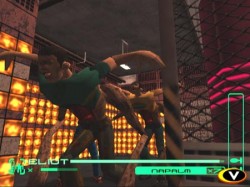 They’re either in pain or the type of people that always blink when getting their picture taken.

The larger enemies and bosses are a bit different as they tend to take up more screen space, need to be hit with the more explosion themed armaments, and are actually pretty exciting to face off with. I’ve always been a sucker for big bosses and Blue Stinger doesn’t disappoint in that department, although, the goofiness of the game still effects those behemoths. Outside of the lack of graphical clarity of the time, I wasn’t entirely sure what I was fighting. When I did, it turned out to be something like a giant hermit crab that used an SUV as its shell or a Brontosaurus covered in concert posters. Never scary but always interesting.

Still Can’t Put My Finger On it

I love Blue Stinger not because I loved playing it but because I enjoy scratching my head and getting caught off guard. This allows me to focus on the task at hand, which is killing things that try to kill me. Because I hate mutants and in Blue Stinger mutants are the aforementioned “things,” I was able to maintain a warm and fuzzy feeling without the need to loiter for too long on Dinosaur Island.

Quality, quantity or something else? I don’t really know what it was about Blue Stinger or why I plan on writing to Sega/Activision and demanding a sequel/remake. It just feels right, just like cheap beer, cold chicken wings and nods of acknowledgment at a dank drinking establishment do. So go out, find yourself a Dreamcast and drown your sorrows with Blue Stinger… just make sure you have other games on hand if guests should arrive.