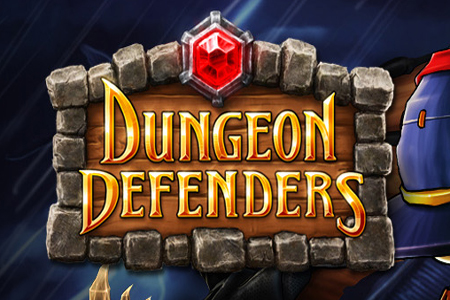 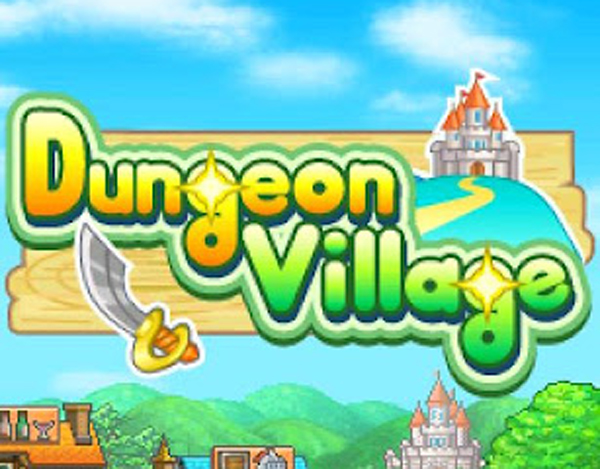 I’ve never really had any desire to become a government figure. There are just too many hard decisions to make and most people either hate you or don’t think you’re doing a good enough job. If I was forced into the role, however I would hope to become mayor of a fantasy town that’s economy was based entirely on attracting would be adventurers to the adventure filled lands just outside the gates. That is the premise of Dungeon Village, a game that sounds like it revolves around a scary destination but ends up shooting adorable beams of light directly into your brain until you start hankering for a “Hello Kitty” backpack. 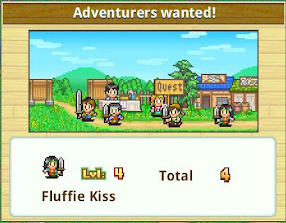 Please come to my village, our economy depends on it

When I first saw Dungeon Village in the app store, I thought it sounded a lot like Majesty 2 (a game that I absolutely loved). The concept of DV is similar, though watered down compared to the aforementioned fantasy city simulator. Your goal is simple: build a town that wandering warriors would enjoy visiting and keep them happy while they explore the dungeons and eradicate the monsters that randomly pop up outside your gates. How does one attract these heroes? Why building shops, planting flowers and giving them gifts, of course! Heroes are really materialistic and despite what has always appeared to be selfless questing, they really just want to be coddled.

You have complete control over what you build and where you build it, and as your town gains levels (through meeting certain criteria) more options are opened up. The adventurers, on the other hand, do their own thing for the most part. The gold they earn from killing stuff goes straight to your coffers. There are quests you can send them out on, such as investigating caves or fighting large groups of monsters, but you have little influence over how they fight outside of any equipment you’ve gifted to them previously. This would probably drive most people bonkers, but I didn’t mind it too much even though my crew sometimes got to quests at different times (meaning they got their butts kicked until their buddies showed up).

The adventurers all level up throughout the course of the game in the standard RPG way and their stats can be further enhanced through the equipment, items, and shops you have about town. I didn’t really focus too much on this as I was preoccupied with planting trees around my medieval strip mall in order to make it more appealing. This may seem like an odd thing to get distracted with, but the shops themselves grow in levels too depending on how many times people visit them which equates to more money, etc. There’s just a whole lot of leveling going on in this game which should appeal to people that love to better themselves and those around them (the plant life, however does not level up which was a bit disappointing). 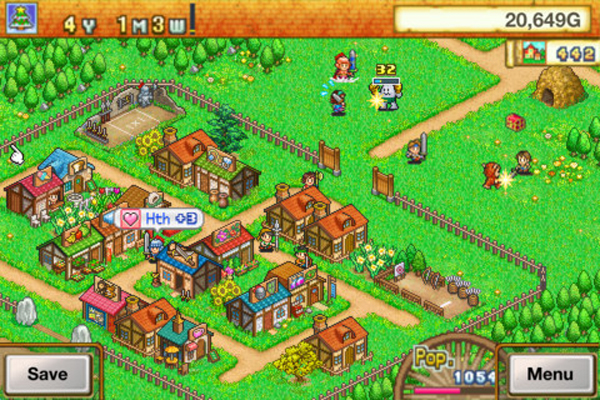 Kind of a risky place for a town to be built, but whatever.

The game is a cute time waster where smiling good guys attack smiling bad guys that look like Pokemon and act like passive aggressive figure skaters. Death isn’t really that big of a deal in Dungeon Village as defeating enemies results in a puff of smoke or dash off to put bandage on their boo-boos. Death isn’t even possible for your heroes as they takes naps after their HP hits zero.

I never really got to a point that I felt like I was losing or that losing was even a possibility. I’m also not sure that I ever felt like I was having fun but for some reason or another I kept at it. It has all the qualities of a social game without the need for actually being social and the lack of micro-transactions made it easier to get lost in the obsessive tinkering that defines these sorts of games. Definitely good for a long trip, but don’t let your buddies see you play unless of course you’re friends with children.