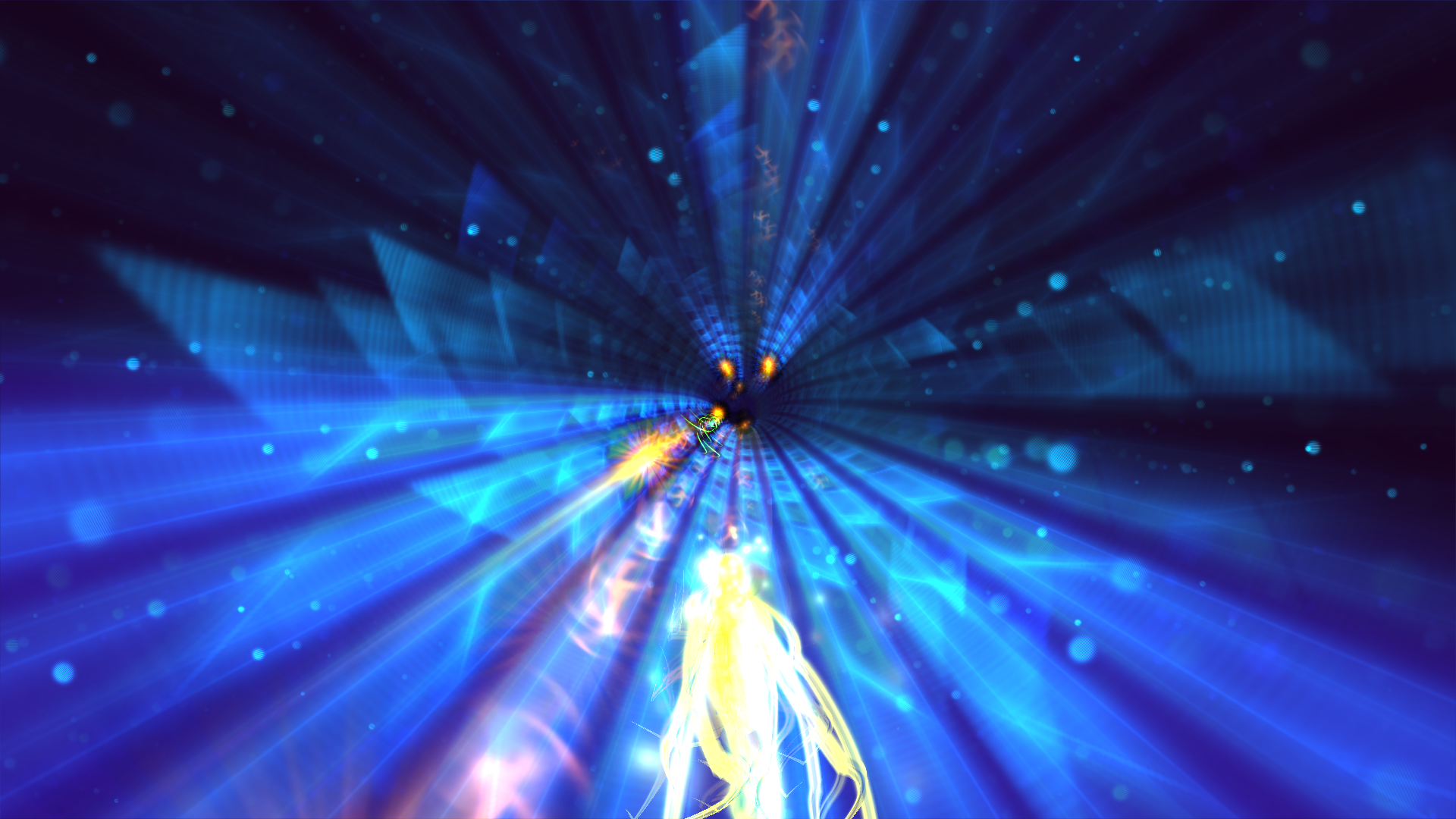 Drooling out of the side of my mouth with eyes wide open, it’s clear to me that Dyad is an experience that’s tricky to describe. Sometimes it’s a racer and you’re up against the clock, but other times it’s an arcade puzzler and your goal is precision. The commonality found between them is that Dyad is easily capable of overwhelming the senses with equal feelings of euphoria and dread. Either way, this unique music game is fun to learn, it can be unnerving, and a it is a challenge to master.

An annoying thing that I’ve been said to do is listen to audio on my laptop while watching the television at the same time. At its most frantic, Dyad is like doing this amplified by 50. The base game involves navigating a tentacled creature (I named mine “Squidy”) through a tunnel of light and sounds. Throughout its 26 levels, Dyad keeps you on your toes as you accomplish goals in hopes of receiving a three star rating. These goals range from finishing a level as quickly as possible or interacting with a set number of enemies before time runs out. 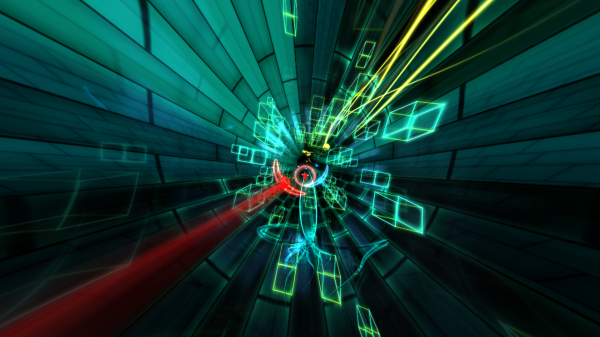 Dyad kinda looks like an abstract wallpaper when it’s not moving.

Squidy (remember, that’s what I’m calling the character you control) is capable of two actions outside of motion: hooking and lancing. After targeting an enemy, hooking sends that enemy into an activated and/or selected state. What an enemy does after being hooked depends on its type of which there are a few. For one specific example, hooking the dot-like mine enemy creates an aura around it that is necessary to power up for a lance attack. Lancing causes Squidy to boost forward, gaining a little extra “oomph” for every enemy it collides into during the lance. Crashing into enemies while not lancing is bad for Squidy, either causing loss of life, a time penalty, or an immediate fail state.

Dyad strikes an excellent balance in teaching users how to play, whether it be explaining how hooking two similar mines provides a boost or how to create ziplines to speed your way to the finish. The next level always seems to play off the ideas introduced in the one before it. By the time everything was unlocked, I felt like I had powered through “Dyad for Dummies” without any of the boredom or shame. Dyad remains interesting from opening to close and never really overstays its welcome.

This can be either good or bad for Squidy.

The true stars of Dyad are the incredible visuals and music that take place throughout all of the game, including the menu screens. As you rush through the tunnel, the flashing of colors mixed with the mingling of various shapes is truly a sensation to behold. Especially when you’re trying to process the fact that there’s a game being played in there. At its most serene, Dyad can be mistaken for a computer screensaver. When things amp up into insane territory, it almost becomes too much for the eyes to process. I’m pretty sure I started to tear up at one point and didn’t know whether to look away or keep playing so I didn’t mess up.

The soundtrack is a little harder to pin down as a lot of what is heard is dependent on your actions during a given level. Hooking and lancing enemies give off chimes and notes that might be absent the next time a certain section is played differently. Speeding up increases the tempo and hitting breakneck speeds can cause some of the wildest chirping as Squidy narrowly avoids enemies from all angles. Like the graphics, this becomes a double-edged sword at times. I literally began to feel stressed out and sweaty on a certain level as the music volume rose and the urgency of impending failure began to warp the music into a violent and thrashing remix of what had otherwise been an awesome track. I can safely say that this part of Dyad makes it not my immediate game of choice when I need to unwind from a long day. 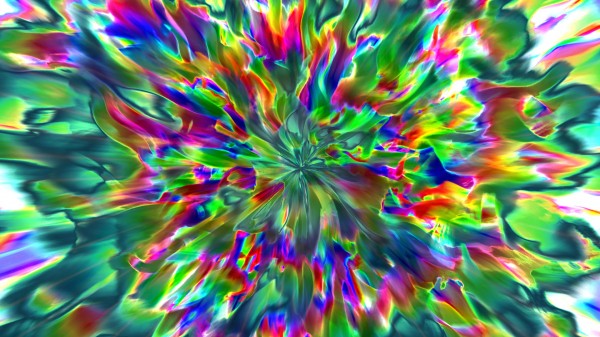 My eyes! My beautiful, beautiful eyes! I don’t know even know what… OOOOOH MAN!

After the first run through Dyad, free play versions of its levels are unlocked that allow you to tweak all sorts of settings to create all sorts of soundscapes and just goof off. It’s a pretty cool inclusion that allows players to experiment with the gameplay and just see what happens. On the flip side, getting all three stars on a level unlocks the Trophy version of it. These are some of the most challenging trials I’ve come up against and I’ve only beaten two of them so far after several agonizing tries. Like the name suggests, they are essential for unlocking Dyad’s trophies and provide either a nice incentive to keep playing if you love achievements or a great reason to go outside and just reflect on your life.

While the influences of other games is present in Dyad, it really doesn’t feel like that once the controller is in your hand. Your brain, eyes, hands and ears are all moving as one big machine by the final levels, hoping you don’t fumble away that precious three star rating. There are online leaderboards available, causing me to feel pretty awesome or very insignificant at times. The whole time through, I was on the edge of my seat caught up in the moment. Sure, I’ve wanted to eat my controller from time to time, but if you ever wanted to rock the house in the craziest way, Dyad just might be the answer.

Available on the PlayStation Network for $14.99, Dyad is great if you’re down for fast-paced gameplay and the nature of its music and visuals. It makes for a great game to show off to friends that otherwise wouldn’t have known that things like this exist on the digital side of the marketplace. Buyers beware, as a bulk of the replayability comes from completing all the trophy levels and those suckers can be punishing. Playing for longer sessions might also cause some unwanted strain, depending on your tolerance for the lights and sounds. To all, I suggest giving the demo a try before plopping down the cash. For most, I imagine it’ll be worth it. Value score: 4/5