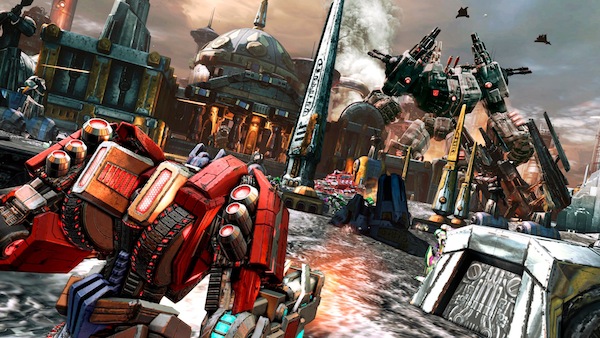 If Transformers: War for Cybertron was a delicious Energon smoothie, then this demo for Fall of Cybertron is a Matrix of Leadership jammed straight into your chest. Josh, Justin and Ethan roll out for a Game Curious look at the demo for the sequel to the prequel of the G1 Transformers cartoon. After this preview, we think Fall of Cybertron might actually erase the memory of Rodimus Prime.

Josh Lee has been touting the Transformers Cybertron video game series for a while around here, and I have to say I doubted him. I could not get beyond the fact that on the surface level a Transformers game published by Activision sounded like a money grab if I ever heard one. Josh continued to press on how much fun the multiplayer was so the series always stayed in the back of my mind.

About 5 seconds into the intro video for Transformers: Fall of Cybertron and I had completely changed my opinion. The passion that High Moon Studios has for Transformers literally exploded on screen and the demo never let up. The level of polish on everything from the character models, the weapon animations, the weapon sounds, the music, and the voice acting awoke the obsessive Transformers fanboy that I was as a child. I hadn’t felt that sense of awe since the final battle of the Transformers movie which (regardless of the quality of the film) is the most epic movie scene I have ever witnessed.

Once I came down from my robot high, and took in FoC for what it is, the game just looks flat out fun. The third person shooting action looks as good as anything in the genre, combined with the fact that your tactics can change with a click of the transform button. I also did not expect to care about the narrative, but there is a large scale war going on here that I cannot wait to dig into.

The only question I’m faced with now is, do I have enough time to finish War of Cybertron before picking up Fall of Cybertron?