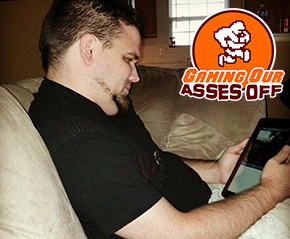 Why am I participating in Gaming Our Asses Off? Aside from wanting others to benefit from me benefitting myself, personally it’s about forming some new habits. I’ve gotten content and lazy in the last few years. It’s one thing to be complacent, but I really just wanted to feel better about myself and that came down to enacting just a bit of discipline on both sides of my life. On the health side it meant figuring out what the hell I’m actually doing to myself, and on the gaming side it meant getting control of the game’s I buy but never play. 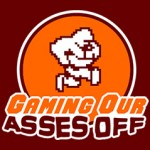 I now have two weeks under my belt, and I’ve heard it said that it take three weeks to form new habits. This week is kind of an important week then in step one of my weight loss process. I decided early on to focus on one change at a time, so this has never been about changing what I’m eating so much as paying attention to how much I was eating. I committed myself to calorie counting, and after trying a few different apps I’ve found a new best friend in the MyPlate app from Livestrong.com. 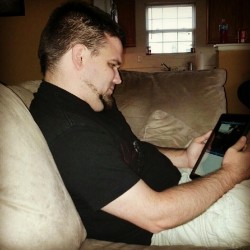 I’d like to thank my loving girlfriend for inadverdently snapping this motivating photo. I’ll let you know when I find my neck.

The free version of MyPlate allows you to set a healthy weight loss goal of up to 2 pounds a week, track calories eaten/burned, and it has a pretty database of foods already entered into their system. While I didn’t necessarily track my calories before this competition, by my estimates I’m currently taking in about half the calories a day that I used to. My focus has been on on a few fronts:

Sure it can be annoying or seem like a pain to track calories at every meal/snack, but it actually helps me stay motivated and pay attention when I’m eating something because I’m bored rather than when I’m hungry. This has been especially true during game time, as I’m a notorious snacker and soda pounder during long game sessions. Gaming and counting calories are two separate activities. I found myself asking if it was worth the hassle to eat those few chips, getting my hands greasy, having to stop the game, enter my calories into the app, wipe the grease off my phone and controller, and then resume gaming? The answers so far has been – I think I can get by with just this bottle of water.

Next up for “the fittening,” starting an exercise routine. Keeping my energy level up should be interesting.

I really struggled to find game time during the first week of our competition. I underestimated one little detail about the competition, and that is, how much time it takes to put together promotional material. While I haven’t felt like I’ve had a lack of game time in recent months, my game time and the time I put into Horrible Night stuff pulls from the same pool.

However, all of that prep-work is now complete and after a slow start I’ve gotten into more of a groove. My achievement hunting is all about blasting through as many single player adventures in my backlog as possible. I did not expect GiffTor and I to choose the same game right out of the gate though. He has been raving about The Darkness II and my first playthrough did not go quickly as I didn’t have too much fun. That’s why game developers created New Game+ thoug. Not only does New Game+ make the game much more fun the second time through, but it really makes all of those achievements seem a lot more obtainable. 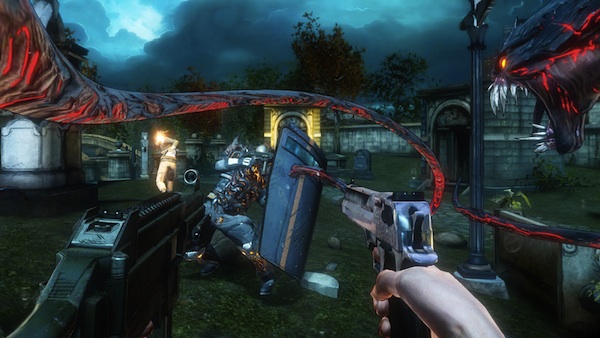 Confession: I weigh more when I unleash my inner demon.

Not only has New Game+ been a welcome addition and made me appreciate the campaign in The Darkness II, but there are smaller side story missions called Vendettas that are even better than the main game. So I started to understand why GiffTor was able to get most of the achievements in this one, and now I’m not too far behind. It’s changed my achievement approach, too.

Originally, I assumed I’d just get through as many games as possible. Beat one, move onto the next. I didn’t want to get into the game of researching low hanging fruit for gamerscore, I just wanted to play the games as naturally as possible. Not for any sportsmanlike reason, it’s just that’s usually how I have fun. GiffTor is known as a thorough completionist and play through games he likes multiple times. I tend to play a game as thoroughly as I can on the first play through and never touch it again. One vendetta mission later though, and I found myself having a blast with The Darkness II and I didn’t want to put the game down. The achievements just came on their own after that point.

The next games in my queue are Halo: Combat Evolved Anniversary, Prince of Persia: The Forgotten Sands, Crysis 2, and BioShock 2. I hope I don’t miss my demon arms.

How am I doing? Support me by donating to Child’s Play and by leaving motivational messages below. Trash talking GiffTor is also accepted.

1 Comment → Gaming Our Asses Off Report 7/23: JDevL Learns Discipline in the Darkness