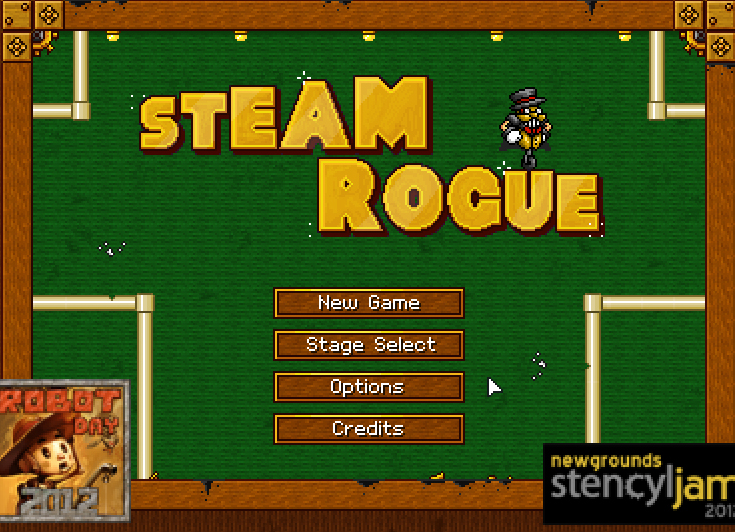 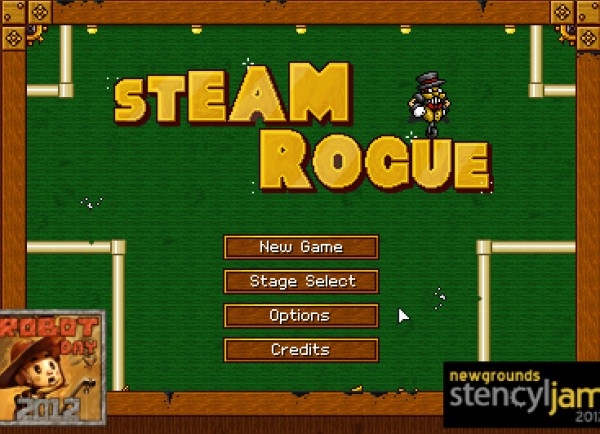 Our esteemed EIC Mr. Justin Lacey suggested a game called Steam Rogue to me earlier this week, but I held off committing it as my choice for Cheap and Dirty based on the fact that I suck at platformers. Maybe it’s not the fact that I suck at them as much as I’m not quite to the caliber I’d like to be yet still force myself through gritty and often times filthy battles with the menagerie of titles that fall under that genre. Despite all of that, I found myself waking up this morning at 11:00 am (after a festive evening of drinks and one of the best patty melts I’ve ever had) without many other options. Being hungover never helps one’s objectivity when playing challenging games, however to its credit, Steam Rogue and its mustachioed protagonist Otto Von Steamingberg won me over in the end.

I think what I really enjoyed about the game is the simplicity of its controls, which is extraordinarily beneficial when one is trying to regain normal cognitive functioning. Basically, you hit down to make Otto move forward, hit it again to stop him and hit up to make him jump. There aren’t really any other controls outside of that, yet this doesn’t mean the game is easy by any means. Because the only way to change directions is by bouncing off walls, one has to maintain a flow through the levels which when accomplished makes you feel super smooth. You really need to time starts, stops and jumps in a precise manner or else risk falling into holes that tend to contain objects of smash-ification. 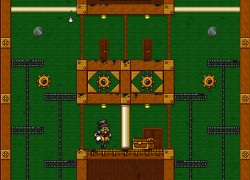 Otto may be suave, but his lust for riches forces him into constant danger.

Additionally, you also need to be weary of Otto’s finite fuel source, which happens to be steam. While you’re able to refill his energy at leaky pipes, it’s quite possible to run out if you get yourself into a precarious situation. You’d think that ole’ Otto would merely lay down and wait until a friend came by with a small container of steam (you know, enough to get him to the nearest steam station) but for some reason he explodes when his gauge reads empty. This is probably a fair warning to anyone who thinks steam powered anything is a good idea because I guarantee those people would alter their perception of the benefits if they saw the horrible things I did.

Even if the mechanics sucked, there’s quite a bit of charm in the retro graphics and the character of Otto himself. I don’t personally trust robots no matter how environmentally conscience they are, but if I was going to open myself up to a friendship with anything mechanical, I could see myself chilling with Mr. Steamingberg.

Steam Rogue is a pretty solid little game and while I can’t see myself putting in too much more time into it, those looking for a unique challenge might find it worth checking out. If you like it, shoot its creator some postive vibes at @AdventIslands.