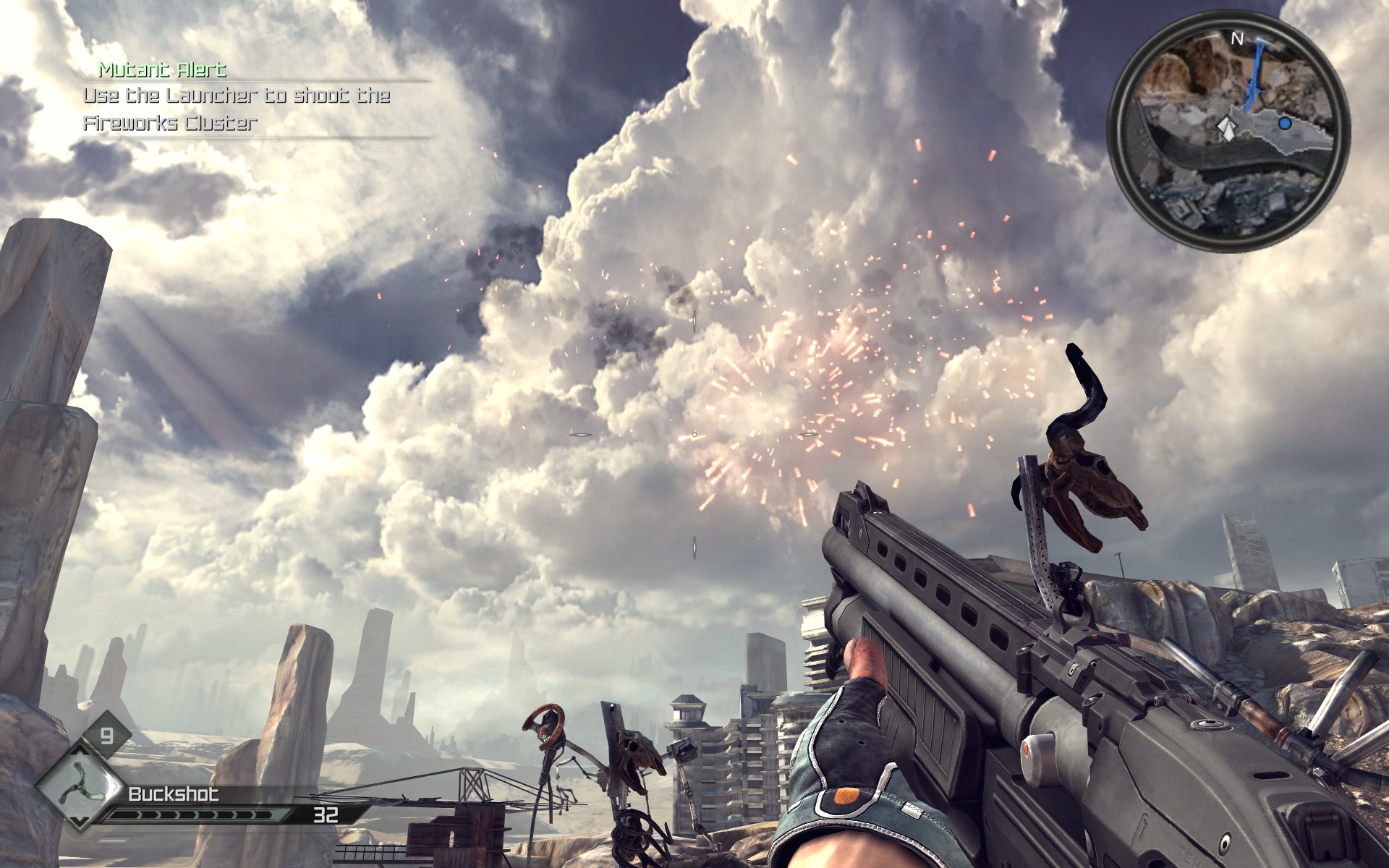 There are risks to my method of purchasing games, since most of the time, the method goes something like this: let Justin Lacey buy the game and then find out whether it’s worth purchasing. If it doesn’t come up in conversation at some point in the future and it’s not raved about (or it’s one of those games I know I’m going to buy…after the price drop) a lot of times it falls by the way-side. Despite my ever-lasting love for its classics Doom and Wolfenstein 3D, id Software’s Rage seemed destined to fall off of my radar until Amazon listed it for 10 bucks a couple of weeks ago. 10 dollars? For a year-old game? From id?! I couldn’t pass that up…and I didn’t. And boy, am I glad. 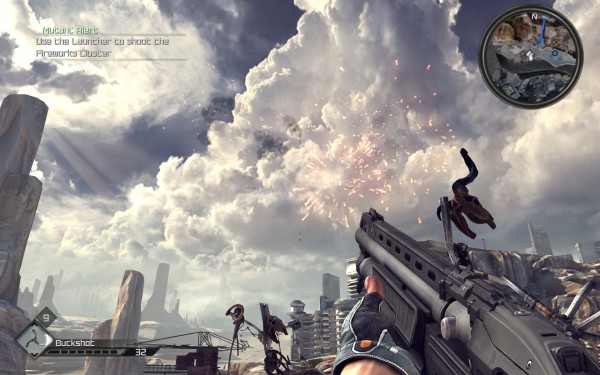 Yes, pretty much the entire game is this good looking.

Check Your Skepticism at the Door

In case you’re not 100% up to date, Rage hit a little bit of stumbling block out of the gate as butthurt PC gamers with ATI video cards got a little… loud about driver problems that weren’t id’s fault. (I know. Gamers getting irrationally and disproportionately upset about something? Who knew?) When you add in complaints about the game being short and gripes that it wasn’t “open world” enough, you can kind of see how it would fall out of my “must have” section of game buying. Then, Amazon put it on sale and I could hardly skip it. Two days later, I had the Xbox 360 version. 30-odd hours of gameplay later, I’m keeping a low profile because I’m pretty sure that the cost-per-hour of gameplay borders on “theft.”

Set in a dystopic, post-Armageddon earth where Arks, filled with humanity’s best and brightest to preserve the species after the Apophis asteroid hit earth, occasionally emerge, you play a silent Ark survivor in a world filled with bandits, a repressive “Authority” and the expected rebellion. It’s not the most imaginative story line and, while some of the side-dialogue is entertaining, the overall plot and NPC interaction is underwhelming. To be fair, the voice acting (including John Goodman) is solid and the NPC’s penchant for gesturing, wandering around and showing emotion is impressive; I’m just not a big fan of being the silent protagonist in a basically option-free, quest driven world. That said, you don’t buy an id game for an epic struggle of morals, romance and philosophical conflict, you buy it to kill things. Lots of things.

First off, Rage is, hands down, the prettiest game I’ve seen on the Xbox 360, although I’ll temper that statement with full awareness I still haven’t played Skyrim. Although it does suffer from the same “brown-ness” that so many shooters do, they’re the prettiest browns you’ve seen in a long time. The level of detail that id manages to coax out of a 7 year-old console, even employing three DVD’s, is staggering. 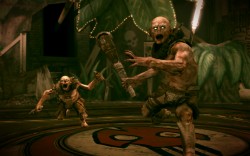 The only thing is, in order to get the realistic “I’m shot!” reaction, you have to hit the little bastards.

What was even more mind-blowing for me, though, was that unlike any other game I’ve had experience with, when you shoot someone in Rage, even with the lowly pistol, they react realistically – they yell out, they fall down, they crawl…basically if you shoot someone, they have a bad day. I don’t know whether to call it a level of realism, but the first time you notice that the enemies aren’t just going to shrug off damage until their allocated hit points are expended is a pretty cool experience. On the other side of the crosshairs, the enemies’ AI is impressive: they flank, use grenades to try and flush you from cover, call for help and will even stage a retreat, looking for reinforcements if you smoke a couple of them in quick succession. I’m sure there are other shooters out there that employ one or even several of those tactics, but I’ve never seen all of them show up in enemies in such a way as to feel like I was fighting intelligent bad guys.

One other note on enemies and combat: while there are a couple of missions with truly awesome boss and mini-boss fights that brought to mind both the dreaded Cyberdemon and some of the bosses from Lost Planet in terms of scale, Rage is generally lacking in actual boss fights, which was a little bit of a let down. With as much awesome, slightly old-school shooterness as it brings to the table, the light smattering of “Holy crap. I have to fight that guy?!” moments were too few and far between.

Completely out of ammo…that’s never happened before

Nah, just kidding. Rage has a fairly decent crafting system that not only allows you to upgrade base ammo to rounds that penetrate through enemies, explode, and empty an entire clip in one trigger pull, but also encourages you to do a little extra exploration searching for base-level parts to manufacture remote-controlled cars that go boom, stalking spider turrets and the coolest weapon in the game, the Wing Stick. If you’re a product of the 80’s, you’ll probably remember the three-bladed Nerf boomerang. Replace the “nerf” with razor blades and some easy-to employ tracking ability and you have the coolest decapitation device invented since 1789. Also, I’d be remiss in not mentioning the mind-control crossbow…which is exactly what it sounds like, with the added benefit that after 5 or so seconds of controlling your enemy, you can make him detonate in a grisly explosion of blue-on-blue violence. On top of your crafting abilities, you’re given the opportunity early in the game to choose one of three classes (+ to crafting and tool damage, defense or cash discounts), although the effect seemed a little underwhelming (to the point that I’m not convinced it matters unless you employ the infinite-cash exploit). 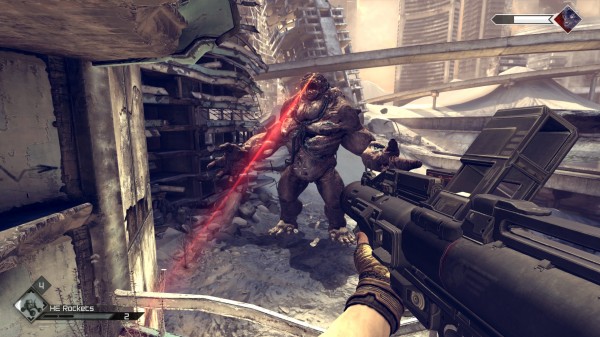 Yes, that is a 6-story-tall, eye-laser shooting mutant. Sadly, his kind’s numbers are too few.

Beyond your crafting abilities, the continued utility of early-game weapons is surprising, particularly your base pistol – with a scope attached and a sufficient amount of powered up ammo, it’s a poor-man’s sniper rifle in the often-cramped tunnels and bombed out buildings with a great follow up in case you miss. The rest of your arsenal, excepting the ammo load outs, is fairly standard – a couple of assault rifles, a sniper rifle, shotgun, and a rocket launcher. That may sound critical, but the weaponry and gunplay remains fresh throughout the 10-15 hour campaign (a little longer if you do all of the side quests and have fun driving around; I’ll get to that in a minute) and, seriously, after the Ratchet & Clank series, very few weapon load outs are what I’d call “innovative.”

Not your everyday Sunday driver

Rage is an “open but directed” game, according to its creators, meaning that while you’re free to move about and explore the wasteland, there is no free-form sandboxing present – there are definite “levels” and unless you forgot something, there’s very little reason to go explore where you came from and you’re physically prevented from getting too far “ahead” of the storyline. That said, tooling around in your Mad Max style vehicles is plenty of fun, whether you’re trying to figure out how to do skate-park style jumps to smash floating orbs or participating in Death Race style rallies to upgrade your cars. Ramming into a guard tower and watching the aforementioned guard tumble to his death provided enough amusement for me to wish for a quicker rebuild/respawn just so I could do it again. 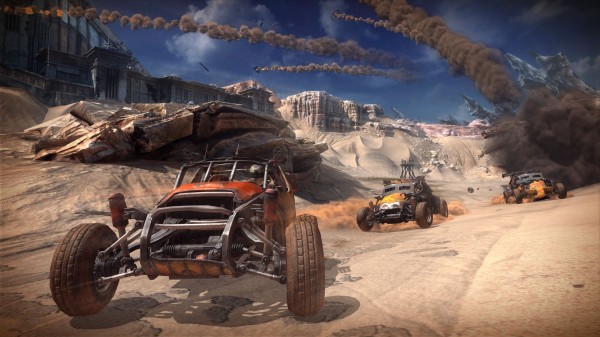 Baby, I’d let you drive my car, but I just blew yours up with a radar-guided missile and laughed as I passed your smoking corpse.

Rage isn’t a vehicular combat game at its core, but the addition of the element (carried out in a much more satisfying way than, say, Borderlands) was a solid one that brought back a lot of memories of Twisted Metal and, before that, Road Blasters, one of my all-time favorite arcade games.

Walking in the Wastelands

Like I mentioned, there was more than a little bit of flaming when Rage was released; I’m inclined that at least part of it is related to John Gabriel’s Online Disinhibition Effect because when you boil it down, Rage is a great, polished shooter with smart AI, a fun driving/combat mechanic and some pretty diabolical enemies. It does suffer from visually from “the browns,” but the draw distance, textures and skins are all top notch. Where it suffers (in reality, not in the minds of the “Argh! It’s not Elder Scrolls and Borderlands‘ Love Child!” crowd) is in its abrupt ending and not enough giant mutants. Rage may not break any new ground, but it’s as good of a pure FPS as you’ll find, which is what you should expect from the guys who damn near invented the genre.

If you haven’t caught on (and the sale’s still going on) the $9.99 I paid for Rage felt like outright theft. This is a AAA shooter that’s fun, occasionally amusing and has enough depth to warrant a second playthrough or some wandering around in the tunnels in its (included) DLC. At 10-15 hours, at least, Rage would be acceptably priced at $40.00. At $9.99, you’re basically telling the world you’re an idiot if you like FPS and you don’t buy it. Value Score: 5 out of 5.

Recoil Review – Games evolve with updates over time and so do opinions. A postmortem review after the dust has settled on a game’s intial launch to see how the game holds up today.