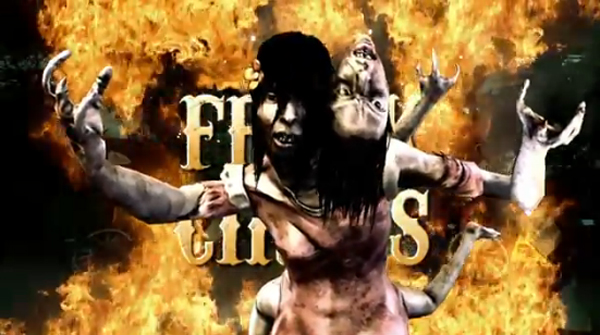 The tales of those living life as part of a circus sideshow act range anywhere from sexy awesome adventures to horribly depressing sob fests and everywhere in between. Where as the fire breathers, contortionists and strong men could easily live normal lives and even use their abilities to create teams of exceptional human beings who thirst for justice, those born with disturbing physical features were condemned to an existence where their humanity was often ignored.

Her milkshake does NOT bring all the boys to the yard.

Freaks as they’re referred to by those without a grasp on political correctness, rarely act in the monstrous way that observers assume they do. Sometimes, however they snap and when this happens we get the Humbug episode of X-Files or the summer event that is occurring in the cooperative survival horror shooter Killing Floor.

The Killing Floor Summer Sideshow 2012 features a new level called Hellride, some new and re-purposed weapons, additional achievements and a DLC character pack called Urban Nightmare. On top of that, all monsters in the game have been re-skinned to fit within the “circus sideshow act gone bad theme,” similar to the way they’d been altered for previous events.

Summer Sideshow 2012 runs till July 23 and is free to anyone who owns Killing Floor. Should you be one of those unlucky fools that missed out on purchasing this game, the game is currently $9.99 on Steam (but only for the next few hours). We tend to get into super raunchy sessions of this game during our Horrible Night Out events, so it obviously has our seal of approval.