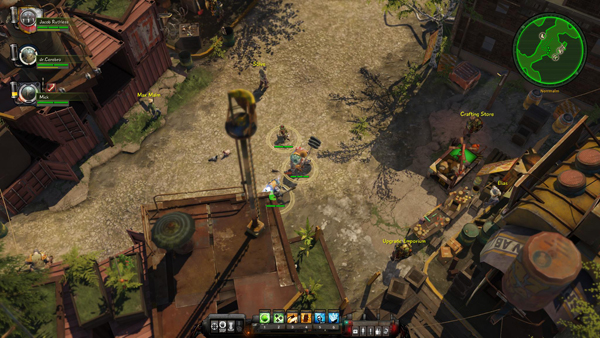 When I preordered Krater: Shadows Over Solside I wasn’t sure exactly what I was getting into. Since Diablo 3 had sunk its demonic claws into me, I was a bit fearful that my dungeon crawling would be bit oversaturated thus preventing me from seeing the merits of Krater’s approach to the genre. Fortunately, Krater is a vastly difference experience from the loot frenzy that defines Blizzard’s powerhouse, and after a bit of time with the game, one that I recommend taking a look at.

At least spirits are still high despite the drop in population and general anarchy.

Without getting too much into the story, Krater is a post-apocalyptic tale where people are struggling to survive in a, well, really beautiful landscape situated around the area where a weapon of mass destruction landed. The game is good looking and coupled with the sense of humor that’s been injected into the characters/scenarios, walks far from the path that many “end of the world” settings take. This sets the game apart from the very beginning and is a welcome respite from ash clouds and the brown hues of what we’ve come to recognize as being post-apocalyptic. The juxtaposition of your gorgeous surroundings and the necessity for the inhabitants to wear gasmasks and other protective equipment, however, makes you realize very quickly that this paradise is anything but.

I can best describe Krater’s overall package as plucky in a goofy sort way. While some of the systems in place may seem overwhelming, the game welcomes you in with a warm hug that lingers a bit too long, though in an entertaining sort of way. Characters are over the top, flapping their arms around and jumping up and down to convey emotions (dialogue is delegated to introductory voiceovers, simple words and expressive noises that remind me of The Legend of Zelda: Windwaker). The game is also very up front about poking fun at itself and the genre it is part of, which is comforting in a world where games take themselves a bit too seriously. The Swedes are hilarious, or at least the Swedish team behind this game are, and I found myself laughing on numerous occasions. The best example being their unapologetic rat in the cellar quest and the exaggerated way the quest giver acts when handing out the simple and very generic mission.

When it comes down to it, jokes and shenanigans don’t mean squat if combat is lacking. Fortunately Krater gets this right, showcasing a system that is both simple and fun-to-play. The most enticing mechanic is the “party” system. Instead of controlling one single character, you control a team of three. Each character is a derivative of common RPG builds (tank, healer, etc) and has 2 powers that are set to hotkeys on the keyboard, giving you a total of 6 powers to control during battle. The powers themselves aren’t anything outside the standard RPG tropes, but who really cares? Balancing your team with regard to these powers is very important, which is where the more strategic side of the multi-party system comes into play. For instance, my Bruiser (the game’s tank) had an area of effect skill that produced aggro, thus allowing my healer to safely heal from a distance while my other squadmate pecked away with his rifle. Eventually, these characters can also find/craft additional items called “gadgets” which add an additional skill to the characters and give you a bit more flexibility on your builds. These range from stat enhancing buffs to explosives and even jars filled with acid. I appreciated the success that came with synergy of a well thought out team, as opposed to a one man demolition crew mindlessly tearing through baddies. 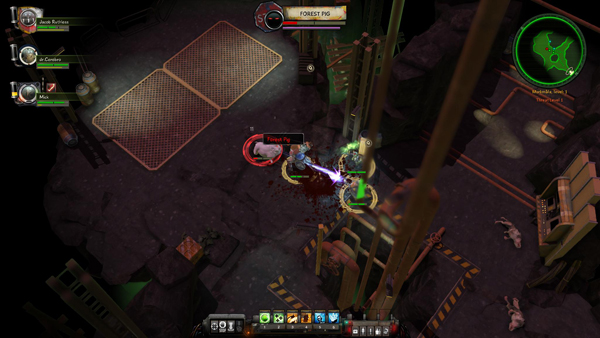 You shoot him, I’ll smash his face and you spray us with that green ray that mends our wounds.

Now looking back, I really should be cautious when I describe the combatants that make up your squad as characters because unlike many RPGs, they really don’t have much importance to the actual plot nor do they have personalities outside of a few humorous grunts. The mercenary system that is in place is one that is equal parts interesting and frustrating. Your characters can die in the hard difficulty setting (which is the only way to play IMO) so you can’t really focus on a couple soldiers in particular as their existence is not guaranteed. I like this idea because it forces you to play intelligently. The developers also implemented a leveling cap on these mercenaries as well. This means that should you be the type that appreciates loyalty and wants to risk playing as the same group you start out with from the introductory chapter, you’ll be doing so with a very outmatched team. I understand that this was done in order to motivate players to expand their ranks, but it does take a bit of freedom away. Not only that, but I didn’t actually notice the level cap until after my experience points stopped filling up the bar. Obviously this is on me, but Krater’s bare bones tutorial could have hinted at this a bit more. This makes level cap just as important of a stat as any other when hiring other mercenaries from the recruitment officers in town.

Who needs armor when you can have genetic manipulation?

Scalpels make me nervous, you mind if I just stick with my +12 strength boots?

Another aspect of the game that appeared deceptively simple but then went in a different direction is the way equipment and stat enhancement work. You’re able to equip each character with one weapon and one gadget. I appreciated this because managing the inventory of one character can be difficult enough, but throw two more in the mix and things get cumbersome. Eventually I began to collect/craft items called implants and boosters, which turn out to be quite the contradiction in regards to the simple model I just spoke about. As your character levels up, slots unlock in two menus; one for enhancing your special powers (boosters) and one for enhancing stats (implants). So instead of having pieces of equipment that can be easily switched out, you perform a surgery of sorts on your characters to add these enhancements. The process is not complicated and in reality makes you think a bit harder about how you build your characters. That being said, I would almost prefer a generic approach to this and just add stat points as my guys level up. Additionally, the shallow side of me likes the way my characters look as they progress which is absent in Krater outside different weapon models and the base appearances of the mercenaries. Regardless, the system does work and I’m making it appear more annoying than it really is.

I mentioned crafting before and it appears to be a pretty important part of the game and luckily one that isn’t too off-putting. You’ll find both crafting materials and recipes out in the world that allow you to build weapons, boosters, implants and gadgets at the crafting tables found in town. Even though you can find equipment in the field or buy it, crafting produces better stuff so it is definitely not a system to ignore.

Lastly, I wanted to make special note of the over world map, how it works and why I think it is actually a pretty genius setup. There are multiple clickable hubs on the map that lead to either towns or “dungeons” in the game. However, random battles also occur as the indicator that represents your team moves from point to point, which surprised and frightened me at first. I wasn’t expecting it, but that is more or less the definition of Krater on the whole. I really liked the random battles as they further emphasized the theme of preparedness that comes in the deceptive harshness that is the game’s environment. 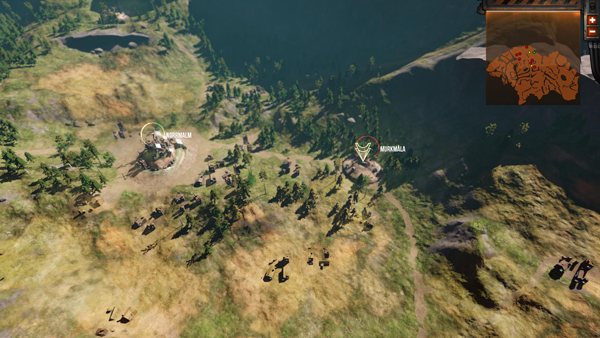 A casual stroll through the woods is not an option as the wildlife isn’t all that casual about wanting to eat your eyeballs.

It may not look like I am smiling, but I am

Despite some nitpicky views on a few of the game’s mechanics, I love the direction Krater is going in and have had a ton of fun playing. I realize direction tends to be a word used to describe games in beta form, but with the massive updating that is being done (at least seven times since its release) you actually feel like you’re participating in the final play test of a game that is already pretty solid. Patches and updates have been used as a means to eliminate bugs, but also to refine game play and just make things better. Frankly speaking, Krater was always going to be a game that catered to a niche audience, but Fatshark doesn’t really seem to notice. While the game is a whole lot of fun to play now, I imagine it will be an even bigger, better animal in the next few months.

I’m looking forward to putting more time into the game and at such a low price ($14.99 on Steam) it is more than worth the investment. I’ll be curious to see what multiplayer is like as I haven’t had the opportunity to test it out yet, but playing the game solo doesn’t feel stale like it does in other titles with multiplayer components. Supporting indie games no longer means wasting dollars on crap or playing “unique” platform puzzlers and Krater: Shadows Over Solside proves that being independent doesn’t have to look independent.