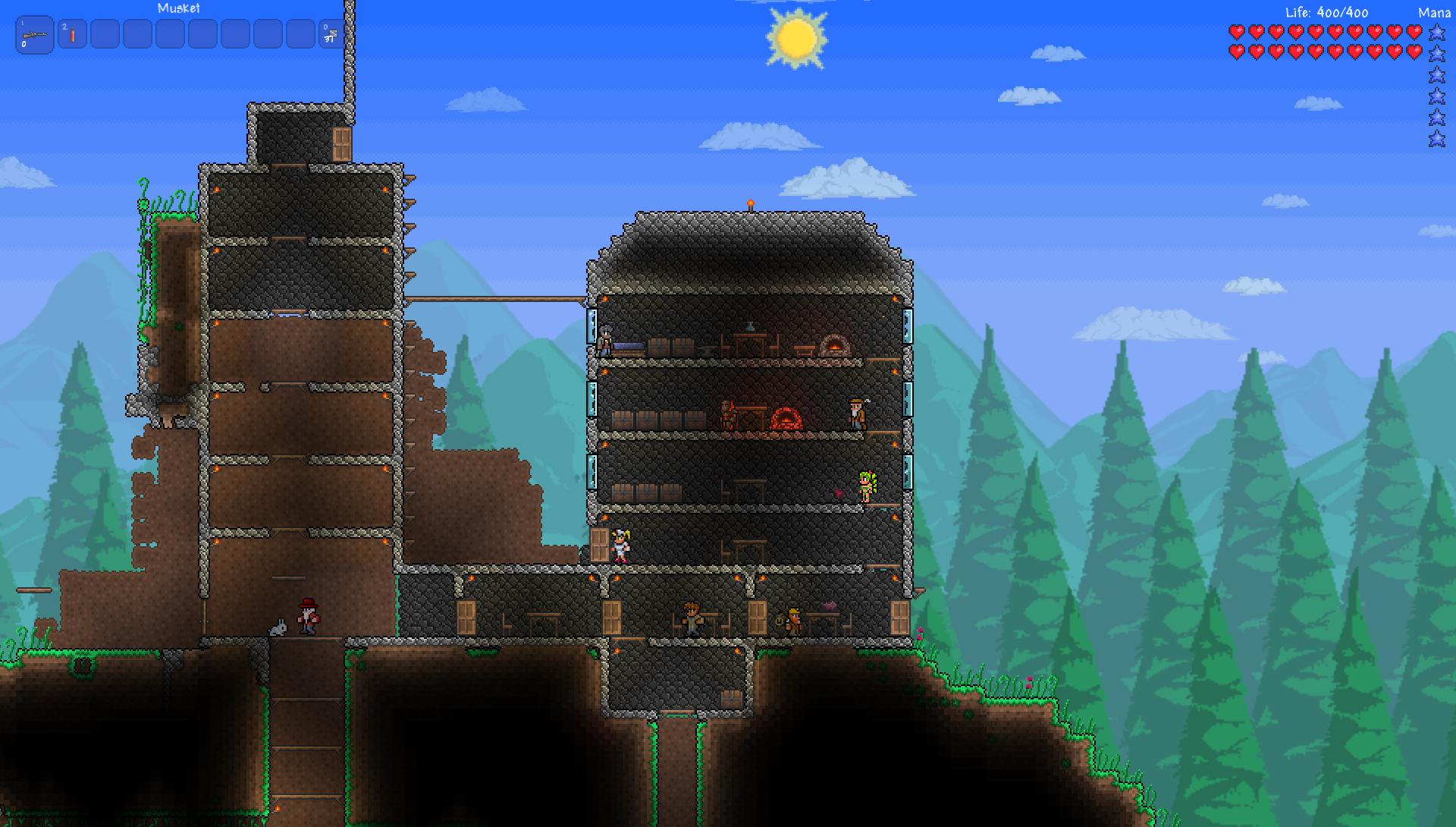 The sky glows orange from a raging inferno that was once a beautiful metropolis. Orphans run barefoot in the streets, desperately trying to flee the evil demons that gulped their parents down in large bloody bites. You look on with anger in your heart; your fists clenched at your sides, veins protruding from your forearms like the roots of a tree. You are this city’s only hope and you must act quickly or else see the world around you reduced to a pile of ash. But before you embark on this potential swan song, you’re going to need to sort through the thousands of sprockets, doo-dads and other gizmo crafting paraphernalia you’ve collected over the course of your adventure in order to find the perfect combination of knick-knacks to build a weapon that would make Satan himself tremble. Those orphans can wait for justice, it’s not like they have a whole lot to look forward to anyway.

I’m so excited, I’m so… scared

I don’t exactly remember the first time a game allowed me to craft my own gear, but I can guarantee that I was really freaking excited about it. I’d been allowed to put things into sockets or add attachments in the past, but the prospects of creating items from scratch made me fantasize about the unrestricted creativity that item shops and shady merchants could never reproduce. I’d be able to craft diamond encrusted swords with three acid shooting blades, helmets with laser beams attached or maybe even a flaming axe with a spear for a handle that gave me advice both about the game and my slowly developing adolescent mind. Obviously there’d be limitations, but the power was in my hands. Little did I know, that power would transform itself from a beautiful path to independence into a compulsive activity that prevented me from actually playing the game the mechanic was featured in. 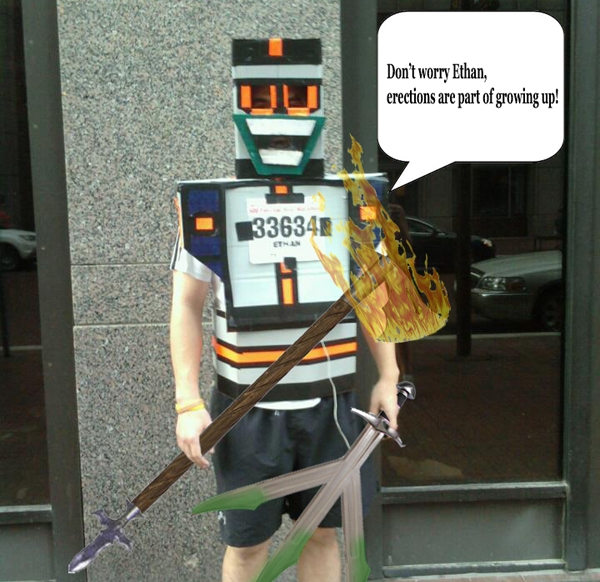 Even robot suited saviors can have self-esteem issues.

I guess I should have known that my plucky little case of OCD (the type that required me to constantly go to the bathroom to check my nose for boogers and never sit with my back to a door) would find its way into my gaming habits at one point or another in. Heck, it’d already reared its ugly head when it came to collecting weapons/armor and accepting every quest in open world games, but finding tiny parts or breaking down items into tiny parts became just as bad if not worse than my equipment/quest hoarding. The worst part about it was that after spending all that time finding the necessary pieces to craft items, I was afraid to build them because of the fear that I’d need those parts for bigger and better crafting projects. Eventually, the treasure chests and rusty lockers that held my digital belongings were filled to the brim with a cornucopia of supplies that amounted to the gaming versions of paste and popsicle sticks.

Games that rely on crafting shouldn’t be a problem, right?

My collecting isn’t as tame as it looks, that deep hole leads to a disturbingly large storage room.

During my short but intense affairs with Terraria and Minecraft (confession: I was seeing them both at the same time…SCANDOLOUS), I found myself splitting time between exploring the landscape, building structures and collecting the materials needed for building higher tier items. I felt pretty good that I was able to function in these crafting-centric games like a normal player and enjoy the actual gameplay as opposed to fuel my brain’s irrational thirst for more crap. I put a ton of time into these games and had large structures and deep mines to show for all my hard work, all of them equipped with the necessary bells and whistles for success in those genres. Perhaps I was wrong, perhaps I didn’t have an issue with collecting items. My Terraria stronghold even had rooms that could only hold ten storage chests and I made sure to keep my Minecraft items warehouse to a reasonable 4 stories. That’s better….isn’t it?

It’d probably be helpful if crafting didn’t suddenly become a prerequisite for open-world RPGs, but for some reason developers feel like it has to be there, regardless of whether or not it adds anything to the game’s mechanics outside of being a time sink. I look at games like Fallout: New Vegas and Kingdoms of Amalur: Reckoning, games that are already filled to the brim with generic fetch quests and other activities that draw out the length of the game (in addition to the expansiveness of their base offerings) and curse them for stealing my brain from me. “You already have enough weapons and items assholes, why do you have to massage the parts of my brains that can’t be satiated?” It reminds me of the super horny girlfriend that I knew wasn’t good for me but held my attention based entirely on the seemingly limitless possibilities her private parts offered. At the end of the day, possibilities don’t always equate to productivity.

I actually avoided Fallen Earth, an open world RPG (which now happens to be free-to-play) because of the depth it had in terms of crafting. This was a game that I was really excited about initially as it looked to expand upon what I loved about the Fallout series, but the second I saw how much crafting was going to be involved, I knew I had to pass for the sake of the other games in my library. I’m not saying that Fallen Earth is a bad game or that its systems were created with malicious intent, but sometimes you have to turn down the cocaine no matter how big and plump the breasts are that you’ll be snorting it off.

In conjunction with the aforementioned equipment/quest compulsions I have, this crafting problem has run more than its fair share of games into the ground for me. I realize that obsessive bouts with any game can have a this effect, but I think there is a lot to be said for productive game time vs. mindless time-wasting and how it relates to a title’s longevity in your gaming schedule. Even though Fallout: New Vegas had its short comings in addition to quite a bit of distracting time sink mechanics, I felt like I was making progress in the world and there was enough momentum within the story to push me through those dark times where hauling mechanical nuggets back to my hideout seemed like the most important thing to do. 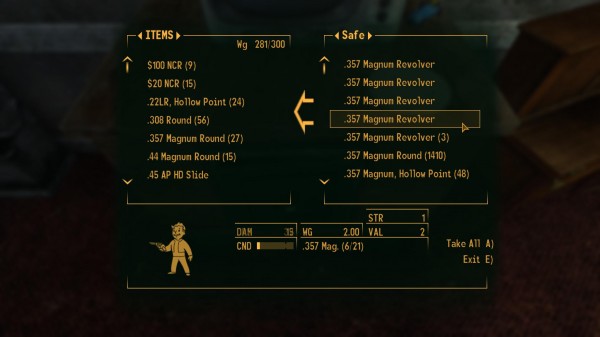 At least I was well stocked for all 100+ hours of my Fallout:NV journey, besides you can never have enough .357 Magnums.

I’m doing my best to divide my time between games that have crafting and games that do not, which is the only way I can see to combat this issue. Puzzle games seem to be a pretty easy and safe distraction as crafting within that genre would be pretty stupid. Refinement of the crafting system helps at times as Diablo 3 has a pretty solid fail safe in terms of the level requirement on creating certain items, but I have found myself hoarding magical power and eyeballs.

I realize this issue is bigger than just a problem within gaming and I don’t want to appear as if I’m anti-crafting because I love me some arts and crafts. However, controlling this problem is definitely going to be the difference between a happy and productive real world and digital lifestyle and an episode of “Hoarders” where I attempt to validate why I have to hang out to styrofoam coolers filled with chicken bones and Hardee’s wrappers.