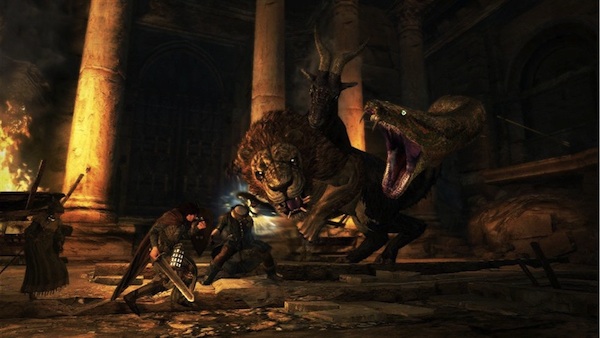 I’d like to meet the gamers who had high expectations for Dragon’s Dogma. I for one, had no idea what to expect when I heard Capcom was making an western-influenced open world fantasy RPG with a combat system that feels like an action title.

I had a feeling I’d be entertained by DD’s quirkiness and nothing else. When Josh Lee sat Ethan and I down to show off the game, the music during the title screen did nothing to counteract that assumption. I was laughing and enjoying myself, but really worried for how the game turn out. See for yourself:

My fears about Dragon’s Dogma were soon replaced with awe as DD has one of the best opening tutorial levels I’ve witnessed in a long time. Instead of giving you a level zero character to start out, DD throws you right into the mix with an experienced hero and a full squad of pawns (your NPC party members) against a chimera. As soon as I saw Josh’s character leap onto the back of the animal and slice of the snake head, I realized that Dragon’s Dogma may actually be worth playing.

Not exactly a training dummy

After the tutorial, we were dropped into a pretty impressive character editor that we used to make a less than capable hero. I’ve seen character editors that allow you to create some pretty funny looking faces, but Dragon’s Dogma gives you full body and limb control that actually effect the skills of your character. This allowed us to introduce the world to Mr. Dave (21:12), a man that truly was “built to mill about” rather than face dragons. However, you cannot call his encounter with the titular dragon anything less than epic.

Finally, Josh skipped ahead so that we could join his true hero and get a taste of the world of Dragon’s Dogma. It surprised me to see that fighting human bandits and rogue held it’s own with the epic fantasy creature battles displayed so far. After so much fantasy adventuring in my recent gaming history, I did not think I’d have any desire to take up a sword/shield/staff any time soon. Dragon’s Dogma may have some rough edges just like the other large-scale RPG’s out there, but it’s the only one that I’ve seen counteract those quirks with an emphasis on fun over gritty realism. Which may be exactly what the genre has been lacking lately.