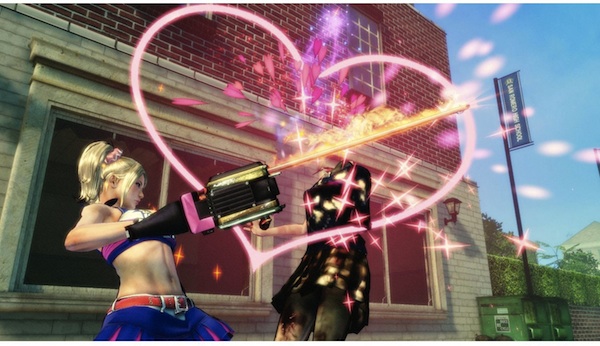 Lollipop Chainsaw and its ridiculous premise of a high school cheerleader zombie hunter with a chainsaw opens itself up to plenty of room for criticism. I do not much care for overanalysis of Grasshopper Manufacture’s stylistic decisions as I usually find them tongue-in-cheek and hilarious. I already know that I’m going to be comically entertained. What is much more interesting to me is seeing how well a Suda51 game actually plays as a video game.

Such a pleasant decapitation.

All games attached to the divisive and intriguing Japanese producer, Suda51, are always a fun experiment. With each new game, I know what to expect going into it but at the same time I have no idea what to expect.

Will Lollipop Chainsaw be memorable as much for its zombie upskirt jokes as it is for its gameplay? I sat down with Josh and Cole to find out just how sweet and innocent zombie killing can pretend to be before it bleeds rainbows and curse words everywhere:

This video is intended for an mature audience as Lollipop Chainsaw is rated M and our commentary is not kid-friendly.