The quality downloadable titles just keep coming. We have a new trailer for Scott Pilgrim vs The World: The Game, but don’t let the PlayStation branding fool you, this game is coming to XBLA as well this August. Right now the game looks like an amped up version of the classic beat-em up, River City Ransom, and that can only be a good thing.

The distinct art style and sprite creation for the game was created by Paul Robertson, who is known for his over-the-top animation Pirate Baby’s Cabana Battle Street Fight 2006. The game’s music is by Anamanaguchi, who are releasing new singles every two weeks on their website from the soundtrack . 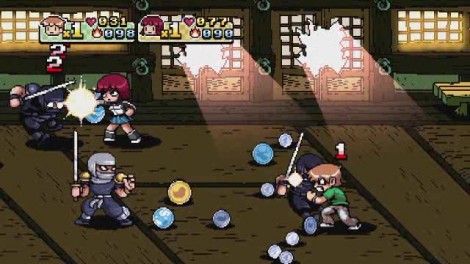 The game will be released to support the movie of the same name, both of which are based off of the graphic novel by Bryan Lee O’Malley. The game features 4 player co-op and the ability to level up your characters fighting moves, combos, and counterattacks. As seen in the trailer, money is dropped by enemies and items, weapons, and food can be purchased in stores help strengthen your character. Of course, the game also features a special meter that summons your band and defeats all the enemies on screen using the power of rock.