You may wonder why I would review a 2 year old game, with the likes of StarCraft 2 and a myriad of others peaking around the corner. The thing is, I’m a huge fan of tower defense and any chance I can get to show the genre some love, I will. Plus, despite the aforementioned powerhouse, there’s a drought of solid games coming out. If you need a quick distraction and don’t want to drop 50.00+, this little diddy may just be your ticket.

Much like sweat in the armpits of a husky fellow, tower defense games have saturated the net since web browsers could support more than just pictures and text. While most are monotonous and lack in originality, there are exceptions to that stereotype that have cemented themselves as the distractionary standard in the oft boring days of office workers. But are tower defense games deep enough to break onto the market as anything more than a free way to pass the time? Defense Grid: The Awakening steps up to answer that question.

Defense Grid doesn’t really attempt to break the mold of tower defense games. Your object still lies in dotting the map with different types of offensive or defensive buildings in order to stifle the advancement of a bio-mechanical alien race attempting to steal energy crystals from you. The main game is level based with a light story interwoven throughout, but let’s be honest; no one plays tower defense games for their intriguing story. This game is pure strategy and at times trial and error, especially as you’re introduced to new towers and their functionality.

The towers themselves range from standard machine guns to mechanisms with the ability to slow time and even weapons that fire molten rock. Certain towers work better for certain creatures and one must be careful to allocate resources properly and stay well rounded as some creatures can bypass certain tower’s all together. The alien race you are battling aren’t anything too exciting, but their different speeds and abilities make for some interesting scenarios. 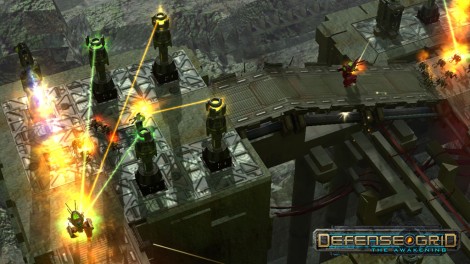 Reenactment of the scary sphinx scene from The NeverEnding Story

Where the game stands apart is the 3d graphics that put it at a much higher level than its browser brethren. The colors are crisp and the different towers shoot all manner of light and projectiles, often canvassing the area with enough multicolored chaos to satisfy any explosion junky.

The gameplay isn’t too varied, and the additional modes unlocked after completing levels tend to just put different restraints on that same level, such as faster enemies, less resources,etc. The die-hard action fan won’t be too interested in this title, but the target audience should be pleased.

At around $10.00, its a pretty cheap price for a pretty long and enjoyable experience. There are a few $0.99 cent DLC packs that add some additional scenarios, but the main game should last you until the fall season. If you’re a tower defense fan and want to grind out some easy Steam/Xbox Live Achievements, this is the game for you. Those new to the TD genre, hit up www.armorgames.com or www.newgrounds.com and take a few free browser versions for a spin.