Oh those crazy Russians! They’ve been defeated with high school fueled guerrilla warfare, pummeled with Italian pugilism and now they’ve gone and nuked themselves into oblivion in THQ’s latest Metro 2033. Luckily for them and American filmmakers, the ever dangerous Russian machine is alive and well under the streets of Moscow.

Metro 2033is a FPS game based on the novel of the same name by Dmitry Glukhovsky. You take on the role of subway dweller, Artyom, as he works his way through the dark and decrepit remains of Moscow’s underground transit system in hopes of finding a way to defend his home against the threat of mysterious creatures called “Dark Ones”. Along the way he must battle mutants, environmental hazards and a cornucopia of  bandits, remnants of the Soviet Army and even some misguided Nazis. Its safe to say young Artyom’s journey is one defined by danger at every turn.

It’d be easy to lump Metro 2033into the same category as THQ’s similarly themed S.T.A.L.K.E.R series, but the two differ greatly in terms of game play. Metro 2033 is a confined game that uses claustrophobic locales to maintain pacing as well as creating some scares along the way. It doesn’t have the open world model of S.T.A.L.K.E.R nor the freedom to do as one wishes. Metro 2033 has a narrative goal in mind and wants the player to stick as close to that goal as possible.

However, for a story driven game it can get pretty confusing at times. Artyom seems to have a special connection with the “Dark Ones” but its never explained why or how. Also, the sudden appearance of a strange environmental hazard called an anomaly ends up being a quick cameo instead of the reoccurring role it’s built as. There are obviously pieces missing somewhere and it would probably help to grab the book, but a video game should never require prerequisite reading material.  Most the characters I met were forgettable and while the different bases and safe zones were lively I never felt connected. 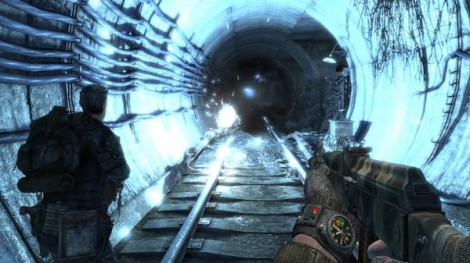 The one thing Metro 2033 does well is scripted events and set piece battles. While I did feel my hand was held a bit, these scenarios felt quite real and were very diverse in nature. The beginning of the game starts off with a pretty impressive battle and the action keeps pumping from there. One of the highlights was an on rails chase scene featuring the modified mine carts used as the main source of transport in the Metro universe. Events such as the previously mentioned scene never overstay their welcome and while they’re difficult at times, replaying them is never a chore.

Another plus was the sound design. From the start menu, your ears will be greeted with life-like sound and haunting music. The echoing tunnels create a constant sense of anxiety and the growling of mutants is all the warning one gets before being attacked.

The enemy design wasn’t anything to write home to mom about, but they were creepy none the less. Unfortunately, there aren’t too many variants to find and by the end of the game you’ll grow weary of shooting giant rats and hairy versions of giant rats. There are a couple really frightening moments involving a creature called the Librarian and the tactics required for surviving such an encounter created a lot of anxiety and drama.

Metro 2033 is comparable to the PC powerhouse Crysis, but unfortunately its for the wrong reasons. It boast some of the highest system requirements on the PC (the Xbox 360 version does not even compare), but it appears this is the result of inefficient coding and not unbelievable cosmetics. Don’t get me wrong, Metro 2033is nice to look at. The DirectX 11 support is very apperant especially in terms of  depth of field and certain touches like putting on a gas mask and reloading weapons looks really cool and are more varied than the animations that seem common place in most FPS fare. However, the game is cast in inky darkness for most of the time, so the vivid texture mapping and animation is sometimes lost to the lack of illumination.

The game play is nowhere near the Crysis series, in fact it feels quite dated in some regards. Gun play is inaccurate and stealth mechanics are pretty random. I’d sneak around at times and be easily spotted while moments later throw grenades undetected and slip past obviously ill trained guards. The enemy AI can’t decide whether it wants to attack, hide or get stuck behind obstacles. The hit detection is just as spotty. Some enemies withstood whole clips while others fell to a glancing blow from a  melee attack. This created a lot of frustrating scenarios, especially when mobbed by mutants later on in the game.

I happened to pick this game up when the THQ mega pack (a very impressive package on Steam. only 99.00 dollars, a real steal) went on sale for 50.00 so my feelings on this game were probably different from those that purchased it at full price. I was relatively satisfied with it because it was basically free, but can’t imagine I would have played it otherwise. There are a few achievements to attain, but nothing that really constitutes multiple replays. It was a pretty long game, but with no multi-player its shelf life is limited.

If you’re a fan of atmospheric horror games, pick it up but only after the price drops. 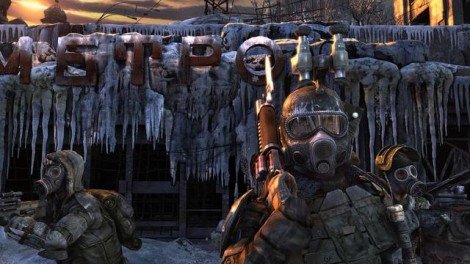 Nuclear Winter can be pretty fucking cold...so can cheap gamers.