I’ve always been an equal opportunity gamer, but can honestly admit that a certain bias still hung in the back of my mind like a closed-minded version of Fonzie, a Fonzie who kicked working jukeboxes so they’d stop functioning. This pervasive individual constantly whispered horrible things into my ear about the world of fantasy-themed games and the people who played them, spouting venom about a genre that has all but dominated the last few months of my life.

The Judgment From Within Will Find Its Way Out

“You don’t want to be one of those guys, do you?” he’d say, subtly hinting at the ridiculously stereotypical concept of basement dwellers dressing as their favorite sword wielding heroes, only leaving the safety of their homes when a convention was in town. The Fonz was my foundation for acceptable social behavior and, even though his eyes were a lot scarier, Evil Fonz still represented this. 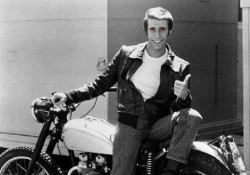 Evil Fonz is so cool.

“No,” I’d say as I looked upon his leather jacket and dark sunglasses with every shade of green that envy could be. I was very good about partitioning time between the real world and gaming, but this latest string of sword and sorcery rich titles was actually worrying me a bit. Dungeon Defenders, Skyrim, Dungeons of Dredmor, Kingdoms of Amalur: Reckoning, Diablo 3 had all grabbed hold of my attention like a hungry monkey grabbing a banana.

Was Evil Fonzi warning me of a possible “addiction,” or was he actually a spiritual representative of games with modern/future themes? Or was he just a symbol of what cool was? Would Henry Winkler think it odd that I had an imaginary version of him running through my brain? Was I breaking copyright laws?

Hallucinations Can Be Informative

At this point I realized that my usual self-assurance was being questioned by a manifestation of my own mind, but the questions that arose were questions I felt were important to consider. While I’d been sucked into games set in eras not dictated by battle-axe duels, fantasy games didn’t need to put forth a whole lot of effort to make me their little boy toy. Obviously, the caliber of games I’ve mentioned has a lot to do with their longevity in my gaming schedule, but I came to the conclusion that my attempted abstinence from the fantasy genre, or at least my abstinence from admitting how much I liked it, was one that most likely came from a pretentiousness that I can gladly say I’ve washed from my body like the stench of drunken bar wench. 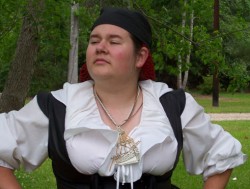 We don't all reek of booze.

Once I’d come out of the fantasy closet, if you will, I noticed the world appeared quite a bit different. I began viewing my friends and acquaintances as potential party members for future adventures as opposed to dudes and dudettes that I hung out with every now and again. This made me think twice about judging people based solely on their social stature, instead digging deeper in an attempt to tease out relevant adventure themed skills. Skills like archery and animal husbandry aren’t the type of skills one wears on one’s sleeve, yet both could be advantageous on an adventure. This wasn’t always beneficial as I had to find a happy medium between “adventure friends” and “modern friends,” because I’d yet to decide on an adventure and some adventure friends are kind of embarrassing in certain settings. Regardless, there’s never anything wrong with meeting new people.

At this point, I was all in. Parties became revelry, medicine became potions and my diet started to include quite a bit more meat that still resembled the animal it was stripped from. At the request of my wife, my ale consumption stayed limited as gout is a common ailment of my ancestors and she grew tired of my drunken sword fights employing the French baguette she often enjoyed with a glass of wine every now and again at the dinner table. She really didn’t understand the references I made to conquering Baal or stopping the resurrection of ancient dragons; she just really wanted to spread brie on bread and watch her stories. A good woman is hard to come by in these dark days, so I kept my behavior in check and saved my strength for my digital questing.

Toasty bread is not quite as useful as spiked clubs, my friend.

The best thing about this waterfall of enthusiasm was how much more I enjoyed games. I literally began to roar when I conquered some unsavory beast on one of my many gaming expeditions, startling my loyal subjects (cats) Scuffles and Snuggles. I felt bad, but holy cow I’d been blind to the satisfaction of sending goblins to their doom via duel wielded swords! I realized that the biggest issue wasn’t the fact that I’d been shy about the way I felt about the fantasy genre, it was that I’d been playing these games wrong my entire life! It was almost as if I’d capped my enjoyment level because I thought I was way too cool to dive headfirst into ancient mythology. The fact is, whether I admitted to playing these games or not, I still wasn’t nearly as cool as Evil Fonzi, Good Fonzi, Zach Morris or McSteamy, all of which had been my standards of coolness up until that point. Yet, why did I think these guys were so cool? They rarely went on any sort of magical journey or heroic rescue mission and their skill set was based entirely around being cool. My eyes were truly open.

I feel like my 5 months of fantasy gaming have not only given me more confidence in the games I play, but they’ve also made me realize that my mentality towards certain things has been heavily influenced by those I respected in the past. Evil Fonzie represented what cool was, or at least what I thought cool should be, but I’m an adult now and I need to have more adult tastes in terms of idols. Sorry Fonz, but you’ve been replaced by characters better suited for destroying the denizens of hell. No hard feelings.