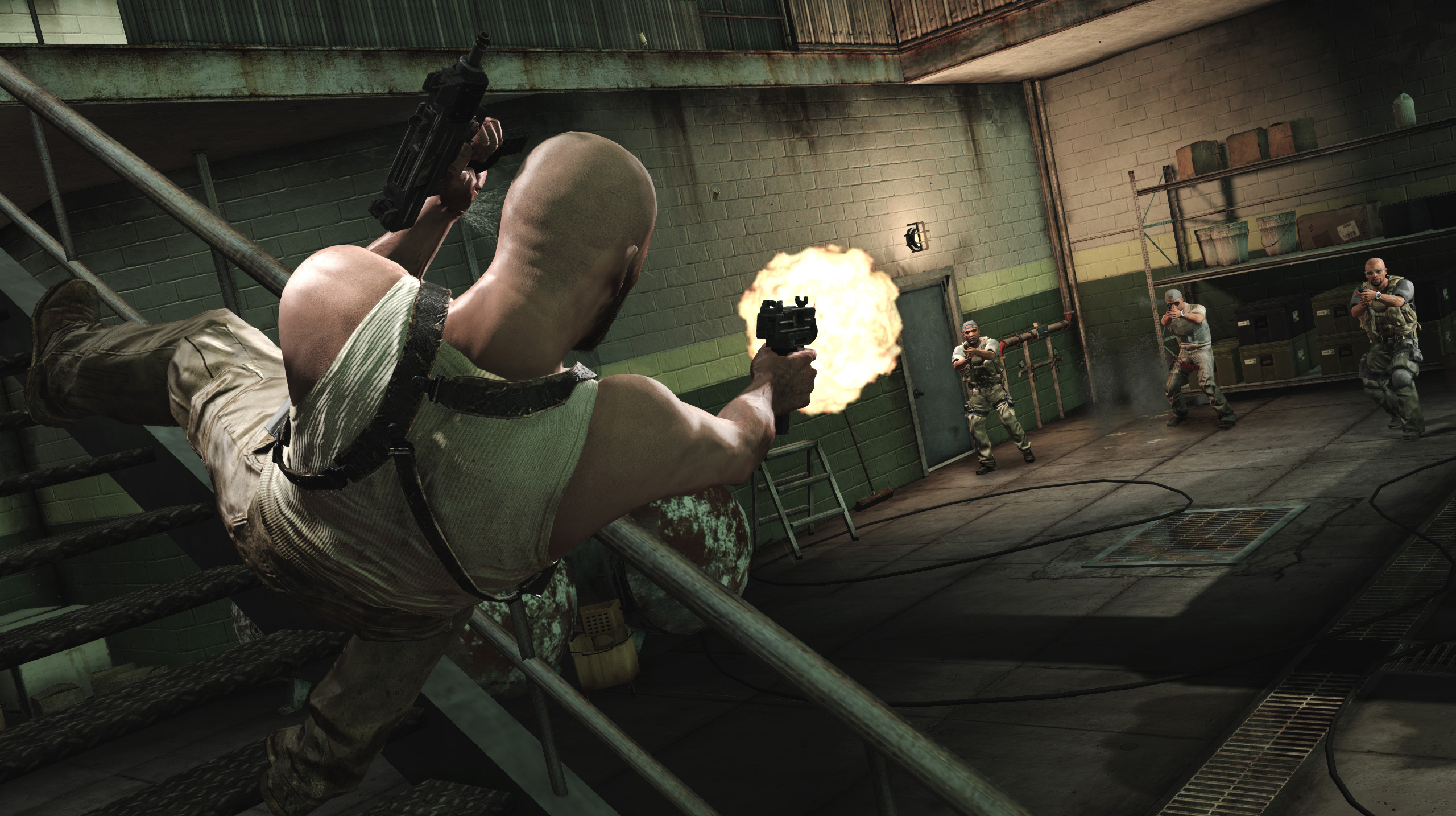 For the average man, the breaking point is when he’s had enough, gives up and admits weakness in the face of insurmountable odds. For Max Payne, it’s an excuse to drink more, grow a beard and take an electric razor to his scalp. Max Payne 3 is both about escalation and sliding farther down into a heap of mess, trading one problem for another and solving them with firearms. While an excuse to pump bullets into waves of nameless thugs and goons on the surface, Rockstar ventures into the psyche of Max and continues to provide a full-fledged character behind the trigger of every gun he wields. The shine fades on some of the smaller details, but Max Payne 3 has the style, substance and third-person shooting that I would expect only from the brilliant developers of Grand Theft Auto fame. 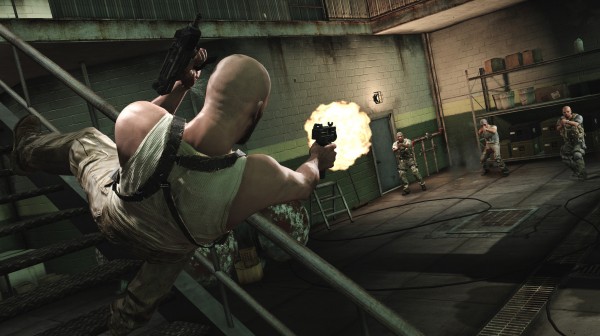 Place your bets. Three standing dudes or the guy falling down the stairs?

Originally a series developed by Remedy and published by Rockstar, Max Payne 3 looks like its predecessors in action, but feels more like some of Rockstar’s latest offerings. While I have yet to spend as much time as I’d desire with the previous games, the noir-inspired character has always been of interest: a troubled New York detective who graduated from the John Woo high school of gun-fighting and the Charlie Sheen college of addiction. Now retired, Max is employed in what should be laid-back work providing private security for Rodrigo Branco, a wealthy businessman, and his trophy wife Fabiana in the city of São Paulo, Brazil. After masked thugs make off with Fabiana, Max and his new partner Raul Passos risk life and property damage to get her back. Of course, not everything is as it seems and Max finds himself deep over his head, just trying to catch a breath of fresh air.

It’s not so much the plot of Max Payne 3 that stands out, but the presentation of this dark tale of violence, loss and substance abuse. Max constantly has inner monologues, letting you know exactly what he’s thinking without unnatural “spoken” or corny wording to fumble the delivery. Max isn’t a poet, necessarily, but he’s able to weave the gruffest of analogies like nobody’s business. He thinks like a man who’s handled his fair share of disappointments and barely knows how to react to them now for the 200th time. Even though I ultimately can identify Max Payne as the heroic type, it’s obvious that he’s been broken and just needs a rest from wading through all of the crap. 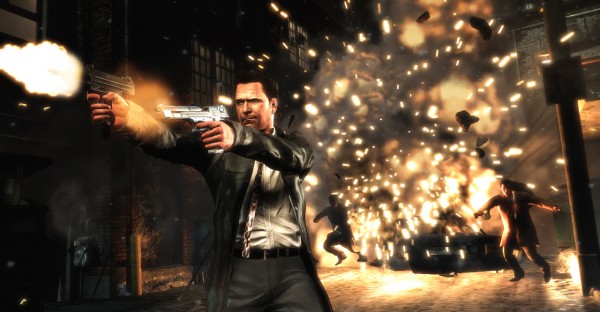 The Max Payne series is about stylish action set-pieces and Max Payne 3 continues that tradition, albeit in true Rockstar fashion. Max runs, guns and frequently dives in slow-motion, but now he also has the frame of mind to take cover behind walls, pillars and waist-high structures. This inclusion might give off the air of being slower in pace, but enemies are well aware that Max is a vulnerable and tired man ripe for the shooting. Thugs will continually make attempts to rush and flank Max, so awareness and quick reflexes are key. I was constantly evaluating my need to drop all assailants compared to hiding and healing, keeping track of my surroundings at all times. Gunfights are often exhilarating and even challenging from start to finish, but nothing felt out of my control even after multiple failures.

Whether it be from all the pills or years of being on the force, Max is graced with the ability of heightened senses or ‘Bullet Time.’ This can be activated in one of three ways: shootdodging, falling into a last stand state, or manually. It should be no surprise that shootdodging, or diving through the air, is the most awesome way to slow down time. Although Max has the gift of an action hero, he’s still grounded in a bit of reality. He moves fluidly, taking an extra moment to come to a halt from a jog and his surroundings have the ability to cause just as much harm as good. Diving into a wall will snap Max out of slow motion, leaving him briefly disoriented and exposed. Vaulting or climbing over cover can make Max a temporary sitting duck, ready for the sharp sting of enemy fire. Luckily, painkillers are there to alleviate the hurt and, as long as Max is carrying one bottle, can survive what would have been a fatal shot. As the odds weighed less in my favor, I quickly grew a strong appreciation for these handicaps Max Payne 3 threw my way. Each shootout is best approached with a little strategy. While you’re expected to fail, you’re never expected to fail for too long. 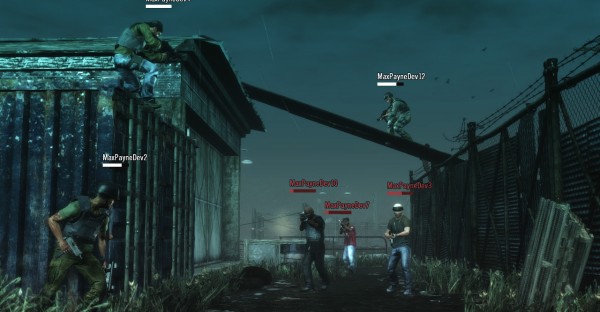 Rockstar is no stranger to creating memorable and sometimes quirky multiplayer experiences these days and Max Payne 3 is no different. The hook here is the translation of Bullet Time into an online battlefield of capable and unpredictable soldiers. The result is a chaotic, yet ultimately fair implementation that requires players to be in line of sight for Bullet Time to actually affect their movement. There’s nothing quite as satisfying as shootdodging two opponents into heaps on the floor, even when the thought of someone doing that to me constantly lingered in the back of my mind.

There’s more to multiplayer than slowing time as each player is allowed to decorate their class as they please, governed by a weight limit. Builds range from speedy spies dual-wielding pistols to armored tanks sporting rifles. The cherries on top are Bursts, special abilities that can be activated as long as there’s enough adrenaline stocked up to use it. The more adrenaline earned from kills and looting, the stronger the Burst when activated. You might bandage yourself quickly with a level 1 Burst, or save it all up and heal your entire team. All of this takes place through standard deathmatch modes, a lengthened series of objectives called Gang Wars and a game type where players kill each other for the right to become Max Payne himself. There are crews to join (like my Horrible Night one), challenges that unlock extra experience and weapons to level to gain new attachments. The carrot-on-the-stick dangles strong when taking Max Payne 3 online and I’m already hooked on keeping the action going after the story’s conclusion.

São Paulo is a living, breathing place and Max Payne 3 looks and sounds like a stylized mirror image of reality. Cutscenes ooze personality, sometimes a little too much, as the screen flickers and spoken words visually appear, but the way a scripted event can seamlessly bleed into actual gameplay is an experience that future games should borrow. There’s a moment where music begins to play as Max continues his assault on the bad guys that literally had me immediately singing its praises. Characters animate in believable ways with enemies reacting appropriately based on where they’ve been shot and Max lunging through the air onto his back to finish off his foes while grounded. I did have the unfortunate bug or two with an enemy being thrown upwards out of cover into my waiting cross-hairs and a very late-game console lockup, but a very forgiving auto-save and checkpoint system is in place to ease the pain. This is a quality and more focused offering from Rockstar and that was more than enough to forgive the occasional hiccup. 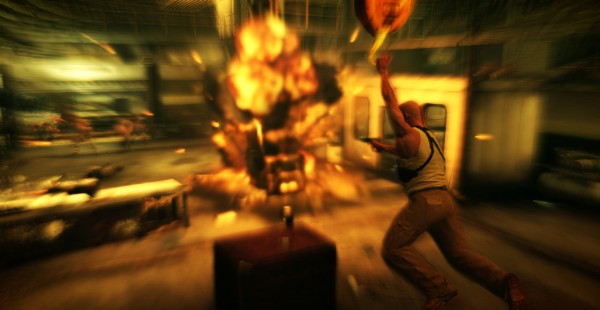 Using the crane for gunfights without a helmet is against safety regulations.

What’s on offer here is a meaty package for action shooter fans. With a story that spans several hours and difficulties, collectibles, arcade-like challenge modes and a robust multiplayer with legs (and planned DLC on the pipeline), Max Payne 3 whets the appetite and then some. Rockstar is able to take the Max Payne series and make it their own while maintaining what it’s about, although the main rhythm is always shooting, slow motion, monologue and then relocation for more shooting. The delivery of this nonstop violence might not be ideal for everybody, but Max resides in a dark and gritty reality. It’s definitely worth a visit to this version of São Paulo. Come for the various sights and sounds, but stay for a wild action-packed ride with Payne.

Retailing for the full $60, there have been no personal regrets investing in the world of Max Payne 3. Rockstar games are by no means the second coming, but they are the top of my favorites list when it comes to third-person action. The single player is lengthy and easily replayable and the online can get addictive. While it costs an extra $30 (woof!) to invest it all the upcoming multiplayer DLC, the base offering is enough for those who don’t mind getting competitive with friends and strangers. If not, wait for the inevitable discount to check out more Max Payne. Value score: 4/5